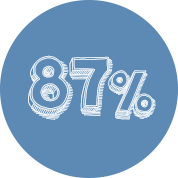 The #13percent conversation is a vital one and, at times, a tough one. Early on in my engagement with the campaign, a male supporter of the cause suggested that centering the message on #13percent isolated men who wanted to be involved in the progress we seek. My weakness is sarcasm and I quickly responded that maybe #87percent would be a more palatable campaign theme. There was painful truth in my response, and also some frustration.
In historic campaigns for equality, there is a common sentiment that applies to the #13percent movement. The majority, the #87percent, can help us- but they can’t join us. The #13percent campaign is not about the majority. The fact that a message centered on the minority makes some in the majority uneasy is precisely what it is going to take to gain broad acknowledgement of pervasive inequity. We all have to get comfortable with being uncomfortable in order to move to a level of conversation and commitment that will start to impact change.
Much has been expressed about how women can and should shift behavior to increase our representation in local government leadership. I’ll share my own thoughts on that topic in a future blog post. But in response to the suggestion that the #13percent campaign theme may make men feel isolated, perhaps it is time for some insight in to what the #87percent can do in their daily local government roles to help the cause.
1. Be a power broker
Power Broker: n. – a person with power and influence, especially one who operates behind the scenes.
Think for a moment about a few strong female local government leaders you know. Have you thought about your influence to broker a connection between them? Think about some up and coming female leaders in your organization. Could you broker a connection to a female in a leadership role from within or outside your organization who might serve as a positive role model and mentor? The reality is that there are more of you out there than there are of us. Helping us connect to each other is a simple, meaningful and concrete way that you can help. If each member of the #87percent brokered just one new power connection a year it would have a dramatic impact on the movement.
2. Challenge the process
Opportunities to lead projects, committees and teams are critical to professional growth and preparation for future leadership positions. If

your organization is fortunate enough to have strong representation of women in most teams, consider how leadership of those committees or projects is determined. The process of leadership by position of authority, seniority, assignment or popular vote can in many instances stack the deck against women. Challenging that process by implementing leadership based on a more neutral process like rotation will further expand opportunities for women to lead. Because of the ratio of men to women in local government leadership, too often in our organizations and communities there are unintentionally meetings and teams made up exclusively of men. Next time you look around the room and see the #87percent staring back at you, take notice. This is the first step. Then consider who you might include in the future. Doing this in a productive manner may mean you have to overlook the hierarchy and make a place for women with the skill set to contribute though they may not have the job title. This very well may result in an uncomfortable confrontation with those who hold the hierarchy dear. Progress can be painful.
3. Be the voice of the new generation
Unless you live under a rock, you have heard about or been witness to a man focusing his attention towards a female colleague on her appearance rather than her professional contribution. Let me go on record: Not every compliment is inappropriate and not every slight is malicious or discriminatory. There are generations of well-meaning men who were raised with the belief that complimenting a woman’s appearance is charming, thoughtful and the highest form of flattery. While this explains behavior, it also explains some of the perpetuation of bias in the workplace. A colleague recently told me about an uncomfortable experience where he witnessed just such an instance and found himself caught between feeling like he should say something and the risk of offending the other man. While every situation is different and appropriate response can vary based on the context and the players, one thing does not vary. Though it is uncomfortable, you should respond. Be bold: What does that have to do with her contributions? Be witty: Wow. I don’t remember the last time you noticed my outfit. Be direct: What is far more impressive is how she’s hitting this project out of the park. Maybe it is appropriate to call it out on the spot. Maybe it is better to have the conversation one-on-one with the man at a later time. At a minimum be brave enough to catch the woman and let her know that you heard it, that it was uncomfortable and that you will lead the way in placing the focus on her professional attributes in the future. Be the voice of the new generation who demonstrate that the highest form of flattery is acknowledging women for their accomplishments, contributions and expertise.

Ladies, while the advice is directed at the #87percent for the purposes of this article, we could all help to advance the #13percent by following these suggestions ourselves. And more importantly we must recognize the members of the #87percent who take the actions recommended above. While they can’t join us, there are plenty of men out there helping our cause. Hmmm… how do we hash that? #13percentS/O? #87assist? I sense a sub-campaign and a signature ELGL meme in our future.
[/vc_column_text][/vc_column][/vc_row]