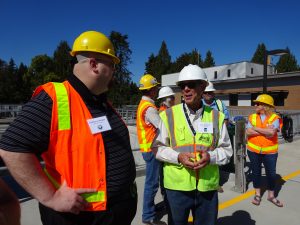 My favorite adventure in life was….spontaneously skydiving in Switzerland with a bunch of knuckleheads so as to overcome a crippling fear of heights.  I can report back that it didn’t work.
What is the most local government thing you have done on vacation?  I can’t help but catalogue potholes, streetlight outages (and lack of LEDs), and other issues.  I have been known to call a few of these in.  For the record, I can tell you that the Jamaican government doesn’t care what I think.
The most important decision that I’ve made in life was…to accept a very substantial Ford Family Scholarship to Willamette instead of turning it down out of some misguided principle because my high school girlfriend didn’t get it as well.  I have my father to thank who disconnected phone service until I came to my senses.  Love can make you do stupid things.
If I was booking the guests for the GovLove podcast, I would book…Ira Glass.  I’d like to think that he would say yes, offer to do the podcast pro bono, and would do it with gusto.  This American Life is my second favorite podcast with my first being GovLove of course.
If I couldn’t work in my current position, I would…be quite sad.
The book on your bookshelf that you intend to read but haven’t is…a biography on Winston Churchill.
Blue or black ink?  Black, but why isn’t pink a choice?
If you could only have bread OR cheese for the rest of your life, which would you choose?  Cheese, but why isn’t wine a choice?
What is your recent personal and professional accomplishment?  Successfully completed a $14.5 million project to construct two buildings and a decant facility for Public Works and Parks Maintenance.  As a by the way, I have chosen to come to this conference instead of attending the Daily Journal Commerce’s award ceremony where this project is a finalist for its construction category.  That is how much I adore ELGL.
What’s one thing you want to be sure to do/see while you’re in the Golden area?  It is a fact that Coors Light is the official sponsor of Utility Workers everywhere.  I intend to pay homage.
If I was writing the questions for the feature, I would have asked… Which Spice Girl do you most closely represent?  In case you were wondering, it is definitely Posh Spice because my sweater vests are on fleek.