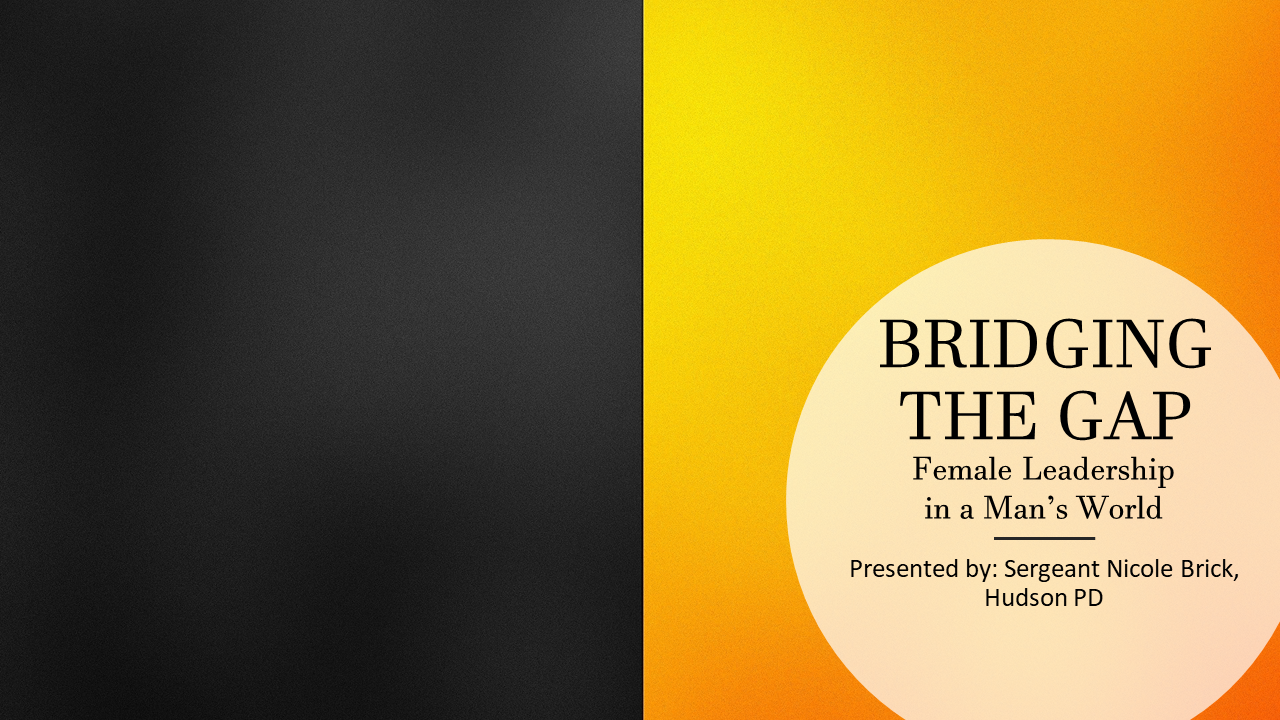 One of the two classes I’m taking this semester is “Methods and Theories of Feminism and Gender”, covering many different perspectives and ideas regarding women’s representation and empowerment. A common thread among these theories is the question of agency and power, on the layers of control that exist. Although there are different valid definitions of each, for the sake of this post “agency” is how much control someone has over himself or herself, and “power” is how much control someone has over their external environment.

To explore these concepts, we’ll use a few examples with one of my co-workers that I’ve asked to help me with this post, Sergeant Brick.

Sergeant Brick is our second-in-command for our Police Department. Not only is “Sergeant Brick” the coolest position + last name I’ve ever heard, what also makes her stand out is that she’s the only female officer we currently have. She’s shorter than me but better at cracking her knuckles. As an officer, she has her tough side, with her pet ferrets a soft side. Where our two positions intersect is with our recent push for more community-oriented policing, my work with our public updates, and community events complementing their goals.

The above is an introduction for Nicole, my coworker. I wrote it. I’d like to think it’s complimenting, shows different sides of her, tries to illustrate a well-rounded individual who defies at least some stereotypes.

It’s also my agenda that’s being pushed forward. I control every single word in what I’ve written. In this first example, Nicole has no agency or power in this situation. I decided what is worth sharing, what would get the reaction that I wanted from you, the reader.

Hello, my name is Nicole Brick and I am a Sergeant with the Hudson Police Department in Hudson, CO. I have been employed with the Town of Hudson for three years. It is a position that requires constant growth and compromise as well as good team building and confidence in decision making. Balance is imperative in such a high-intensity career so I use hobbies such as motorcycling, a ferret sanctuary, and movies to decompress.

The second example was written by Nicole. These are her words to describe herself, and an example of greater agency where she dictates the narrative of her own life. As we can see, there are differences between what I wrote and she wrote, what I felt was worth prioritizing and what she did. The biggest difference that I can see is I included myself in my introduction of Nicole (comparing our height and knuckle-cracking, discussing where our work intersected) where she better stuck to the topic, that topic being her own introduction. Hers also focused more on the nuances and skills of her work, details I’m only passingly familiar with.

However, Nicole still had little to no power in this example. I gave her very explicit instructions to 1) introduce herself 2) in three-to-four sentences 3) via written word, and so on. Make no mistake the above is her voice, but it is her voice within my strict parameters.

This final example is once again from Nicole, but what I told her is to share anything she’d like with the ELGL community, through any medium (text, picture, video, etc). This Powerpoint is what she chose: BRIDGING She doubled down on the post’s topic, made it comprehensive, personal, and visual.

Now Nicole has some power in this situation, to not only speak in her own voice but to determine what this blog post covers and how it is covered.  I admit I was not completely comfortable giving her this much freedom not knowing what she’d put forth under a blog post with my name on it, but that is part of the point. Part of giving people more agency and power is to allow ourselves to be uncomfortable at least to some degree. This serves a great example of why it’s worth it to do so. Nicole was able to add perspective, knowledge, and methods that I wouldn’t have on my own, her inclusion made a much greater whole.

It is not my expectation that we can and will offer everyone the highest degree of agency and power in every situation. Sometimes we do need to speak for and represent others. Sometimes a task or project does have specific needs and criteria that have to be followed. It is about awareness though, to not confuse us speaking for women as the same thing as giving them their own voice. It is about understanding the difference between giving our female colleagues assignments to complete compared to opportunities to be creative and grow. Priorities, parameters, budgets, team members, timelines, methods, outputs, locations, and more, all are examples of ways to offer more or less agency and power.

It is up to each of us to challenge our current practices to find ways to offer better agency and power to women. We can bridge the gap in a way to not only promote equity but create better results for our communities as well.

See you next month!

This guest blog is by ELGL member Matt Hirschinger, the Assistant to the Town Manager in Hudson, Colorado, and Nicole Brick, Sergeant with the Hudson Police Department.

Read all of Matt’s other blogs at the Social Justice –> Government homepage.