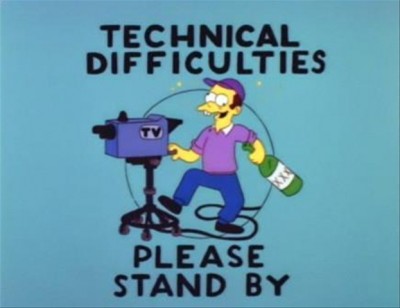 I was finishing up my dinner and watching an episode of what may or may not have been South Park when I checked the clock on my cell phone. It read 6:30 on the dot; time for class to start. Slightly upset that my schedule did not allow me to finish a half hour episode, I started the Fuze program that facilitates most USC online class sessions.

Upon entering the chat, my computer blasted random noises. The chat box for the session indicated that the program was having technical difficulties. A function that let the professor mute all microphones but his own, allowing him to lecture uninterrupted (usually we communicate  with him through the chat box if

we have a question or an answer to one of his), would not activate. This initiated a movement for all class attendees to manually mute their own microphones. To our unpleasant surprise, the mute button had disappeared from a few students’ Fuze menus. While the majority of us were able to mute our microphones, a handful of students could not, ensuring a steady stream of background noise.

The professor tried to sort out the problem with technical support and I went back to watching South Park.

About 20 minutes later, the problem still unresolved, we decided to suffer through some background noise, the equivalent of a few students having a conversation in the back of the classroom, and begin the lesson. I definitely understand why the old party telephone lines no longer exist. The only other option would have been for the professor to record himself giving the lecture and we watch it later, but that would eliminate all interaction, and setting aside 60-90 minutes in the middle of the week is kind of a big deal when you work full-time with classes.

The excess noise proved distracting, throughout the lecture, as I attempted to focus on the professor. During the shortened 45 minute session, I heard an inning of the Boston Red Sox game, a sneeze (after which the chat box filled with many “bless you” posts), a parent yelling at their child, and a dog snoring – as if Micro Econ was not challenging enough already. Thankfully the textbook provided a clear and concise explanation of the material this week, as hard as that is to believe.

Fuze, the USC substitute classroom for distance learning students, periodically does not function properly. This was not the first time that the mute button, or lack there of, has affected a lecture. My professor confessed that he thinks USC will try to find an alternative to Fuze in the near future, but this type of technology has yet to become mainstream. To all of you technology buffs reading this, there could be some money it for you if you can create a better application. For my time in the Masters program I may have to put up with a dog, a child, or, if I’m lucky, a football game in the background of my course lectures. I’m just happy I have an audience to listen to me vent.