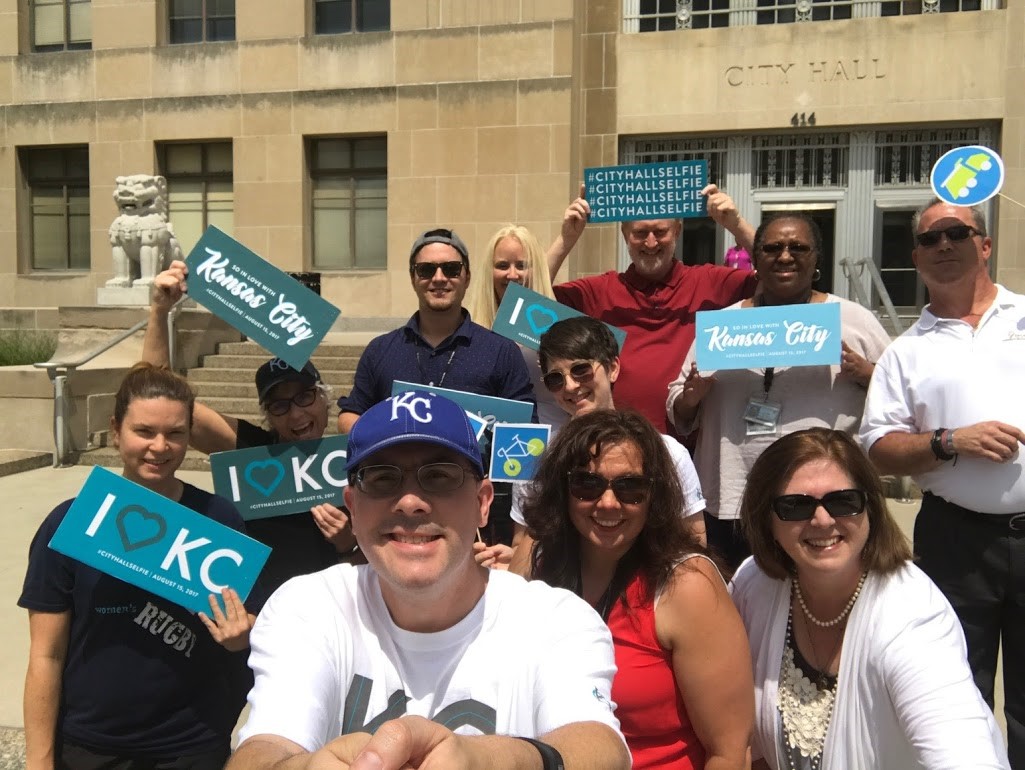 Videos, proclamations, graphic, and giveaways — the hype for the 2nd annual International #CityHallSelfie Day was incredible. Luckily, much of the creative preparation for #CityHallSelfie Day is transferable to future projects that you or your staff may work on.

By Mark Van Baale, City of Kansas City, MO
When it was announced #CityHallSelfie Day would occur again this year, we decided that we would need more help this time around to make this day as great as it could be for the City of Kansas City, Missouri. This year, we had a planning team of 7 people who helped to plan out the day and what we would be doing to highlight the City and the work that our employees do. Without the team’s help, #CityHallSelfie Day would not have been as successful as it was this year. A big kudos to Colleen Doctorian, Lisa Czubak, Beth Breitenstein, Alyssa Dinberg, Javon Davis, and Dillon Wood on the team!!
This year, we set up the City’s first Snapchat account (gasp!) to share photos during the day and we even set up a Snapchat geofilter for those who took selfies in front of City Hall to use.

We also worked with KCityPost to set up a fun selfie frame on the City’s digital kiosks.

We also decided to have some more fun being creative this year by having Mark’s son create LEGO mini-figures of our planning team, plus the Mayor, and having them stand in front of the Lego KCMO City Hall at Legoland!

We also strategically placed the Lego mini-figures to be in front of the real City Hall.

We even caught Mayor Sly James on an elevator to get his selfie:

We have to give a big shout-out to Sarah Martin-Anderson who went to every floor at City Hall to take numerous selfies with City employees all day long! She ended up winning for the Best #CityHallSelfie photography award!

Rick Usher, well known to many ELGL members, even got involved in one of Sarah’s selfies showing him on a City Hall elevator waving to the camera. 🙂

You can see the various City Hall Selfie pictures with City employees and the general public here.
We had more participation this year from City employees which was exciting to see as they enjoyed sharing what they do on a daily basis.
Overall, we had another successful City Hall Selfie Day and can’t wait until next year to show off KCMO once again.