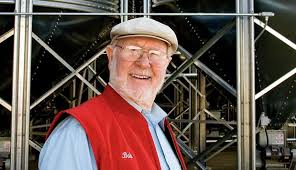 Bob Moore: A man with a mill and a mission

Bob Moore’s office in the Portland, Ore., suburbs is filled with vintage model airplanes strung from the ceiling, a bucket of hard red wheat and a pile of books by Pliny, a 1st-century philosopher who wrote about the natural world. Moore has a thing for the past, but he can’t decide which days of yore he likes best. “I’m interested in everything,” he says. From his office window, he admires his 1931 Model A Ford, one of two he drives to work as founder and chief executive of Bob’s Red Mill. The man who is interested in everything built his business on one thing that has proved timeless: whole grains.

Sometimes the 82-year-old Moore starts the day at the upright piano on the mill floor. He’s a little more relaxed these days, no doubt because on his 81st birthday last year he began transferring ownership of the company, in the form of stock, to his employees. “I like partnerships,” he says.

lthough Moore’s face graces every one of the company’s 284 products, which he says will bring in more than $110 million in revenue this year, you probably haven’t heard of him. He keeps a surprisingly low profile, preferring that customers stay on a first-name basis. On each Red Mill bag, Moore serves as folksy ambassador, wearing a derby cap, glasses and a bolo. In real life, he adds a red jacket. If Whole Foods sells a latte-fueled dream of healthy ’90s decadence, Bob’s Red Mill peddles a more populist fantasy of prairie days, a manufactured nostalgia.

In reality, Moore is harking back to early-1900s wisdom by pushing whole grains, high fiber and complex carbohydrates. Doing so positioned him ahead of the curve 37 years ago, when he opened his first mill with his wife, Charlee, and two of his three sons, in Redding, Calif. Moore’s Flour Mill, as it was called then, had nine employees.

Today, the “Mill” is an impressive 320,000-square-foot building the company moved to in 2007; it is flanked by silos on the side of a highway in Milwaukie, Ore., about 15 minutes from downtown Portland. Inside are putty-colored Danish-made mills, each fitted with a millstone that grinds whole grains into cornmeal, flax meal, brown rice flour and more.

Continue reading: Bob Moore: A man with a mill and a mission