#CityHallSelfie Day is managed by ELGL, the Engaging Local Government Leaders network. ELGL is a professional association of 4,800 people who work for and with local government.

ELGL’s mission is to engage the brightest minds in local government. In 2019, ELGL and Bang the Table are partnering to produce #CityHallSelfie day. 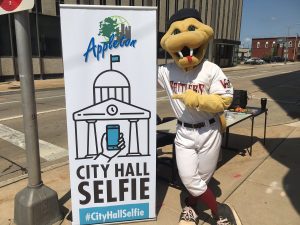 ELGL and Bang the Table award prizes for the best #CityHallSelfies in multiple categories.

#CityHallSelfie day is August 15 of each year.

#CityHallSelfies are traditionally taken in front of city halls, but we also accept submissions using the hashtag in front of town halls, county buildings, libraries, police stations, and any other local government building that participants are proud of and want to showcase.

Groups of people are encouraged to also participate; it doesn’t have to be a single person to quality for awards and recognition.

Please also include the local government name if it is not readily obvious from the picture (e.g. if the name of the city isn’t on the city hall building or in the Twitter handle of the person sharing the #CityHallSelfie) to be considered for an award.

Local government work can be challenging and so it’s important to find the joy and happiness in the work that ELGL members do to keep local government employees motivated and excited about their work with cities, counties, districts, and other local government agencies.

The simple act of showcasing your local government organization with a #CityHallSelfie can be a reminder of the importance and value of a public service career.

A #CityHallSelfie can also be a way to showcase to community members the pride and excitement that employees feel when they work in service to the community.