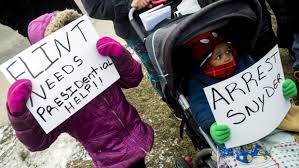 With criminal charges for three government officials announced this week, this timely post was written by guest writer, Katherine Shor, who is the Food System Finance Program Assistant at Self-Help and the Organizing Intern at Food & Water Watch North Carolina. She earned her BA in Public Policy at UNC-Chapel Hill and is passionate about environmental justice.

The national news media released hundreds of stories on the water crisis in Flint, MI, from a variety of perspectives. Food & Water Watch, a national democracy-building organization that advocates for clean water, safe food and clean air, recently released a timeline of events for the Flint water crisis. This timeline outlines who knew what, when, and their extent of involvement.

The timeline unveils that government officials knew that the water was dangerous to human health for a while. Rather than addressing the problem head-on, it seems as though they attempted to hide it. The Food & Water Watch timeline also reveals that multiple levels of government were involved in the cover-up, including Michigan Department of Health and Human Services, Michigan Department of Environmental Quality, Flint’s Emergency City Manager, the US Environmental Protection Agency, and Governor Snyder.

I have been asking myself and grappling to understand, how does this kind of government failure occur?

There is not a straightforward answer. It is impossible to point a finger at the single action, official, or allocation of funds. It is a long, slow and complicated development, spanning over multiple years, administrations, and budgets. There are some explanations, however, as to why this type of government failure occurs.

The depth of government failure, the neglect and mistreatment of an already deeply vulnerable population, the potentially permanent damage to children’s brains, and the series of events that led to this tragic debacle must be carefully examined for at least two reasons.

First, the fact that the richest economy on the globe failed to provide an essential public good is a symptom of government failure with which we must reckon. Second, such failure is not a benign accident. It’s not a passive failure of lazy oversight. It is a strategy to first break and then discredit the public sector, to undermine trust and inculcate disgust. The beneficiaries of this strategy are the wealthy who will then push for smaller government and tax cuts. Those who pay the price will be people much like those in Flint. And there are many more of the latter than the former. […] Flint is a wake-up call. The question is, now that we’re awake, what are we going to do about it?

Bernstein’s call to action is directed at voters in the context of the upcoming general election in November, but it still holds true to a broader local government audience. Government failure at this scale fosters distrust of the public sector to provide public goods, creating market for private companies to purchase public services away from local governments, increase rates and taxes, and sink municipalities into greater debt. As a result, more governments are run like businesses and are less likely to widely deliver affordable public goods.

An example of running government like a business, in regards to water infrastructure, is when private companies approach municipalities who are in non-compliance with the Clean Water Act because they cannot afford to remedy their failing water and sewer infrastructure. Private companies offer to lease the system, take steps to improve the infrastructure, and simultaneously reduce ratepayer charges. Too often, these companies do nothing to address water infrastructure and ratepayer charges increase. This leaves municipalities in noncompliance and they have to raise taxes to cover regulatory fines. The resulting tax increase generates a perception of unleashed government spending, sending more support to the small government, less taxes camp.

To answer Bernstein’s call to action, I believe the first battleground is at the local government level. Well-run local governments have the potential to dismantle the government failure strategy and re-position the public sector as a reliable provider of affordable public goods. It is not my place to tell a local government official how to do his/her job. However, as a citizen, public health advocate, and generally concerned young adult, I believe it is my obligation to remind you of your power. You are the strongest bridge from your community to the animals that are the state and federal government. You are capable of rebuilding trust of the public sector within the communities you serve. Your measured actions and sound policies foreshadow the benefits of a functioning public sector.