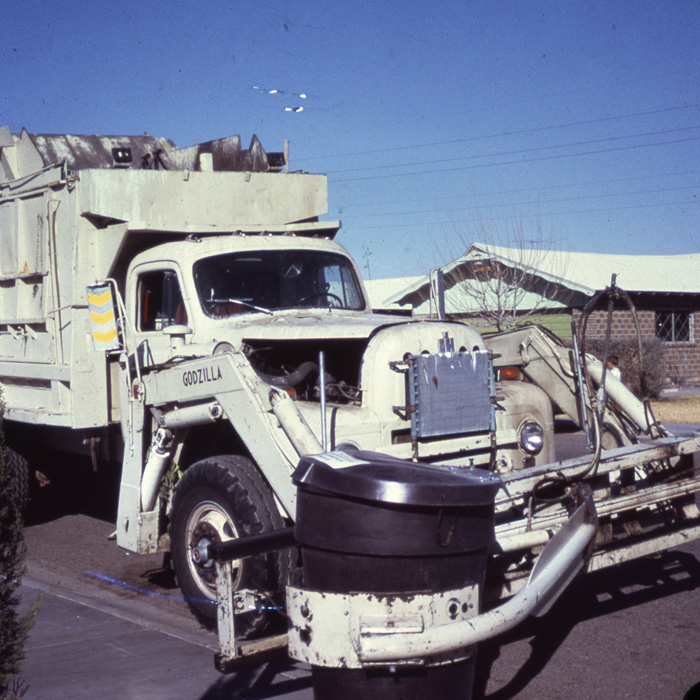 What I’m Listening To: Something to Say by The Town Pants (2018)

Fifty years ago a group of local government employees in Scottsdale, Arizona changed trash collection forever. Scottsdale pioneered modern trash pickup in 1969 when city staff built a truck sporting a mechanical arm that grabbed and emptied containers at the command of the driver.

City mechanic Chuck Kalinowski was assigned the task of building the grabbing mechanism — out of frustration he called what he was building “a darned monster, a Godzilla!” The name stuck.

In 1965, the City Manager, Assistant City Manager and three Department Heads had formed a brainstorming club apart from the city to develop and promote new ideas. They called themselves Government Innovators and among some of the ideas to emerge was the concept of mechanized refuse collection.

The year before Scottsdale had created a Refuse Division and began providing municipal refuse collection service to its residents. At the time the only way to collect refuse from residential households was by hand. The sanitation workers were not called “garbage men,” they had a title appropriate for “The West’s Most Western Town” and were called “Refuse Wranglers.” They picked up trash by hand and emptied it into open-box trailers using the then state-of-the-art “Train System.”

As with all manual collection systems, Scottsdale’s system had a number of inherent problems.  There was a high rate of employee turnover (91% in 1968). The work was physically demanding. The industrial injury rates were extremely high, wages for manual laborers were very low and image was a problem. Manual refuse collection left the alleys littered with debris, and every homeowner provided a different sized container. Sanitary conditions were marginal at best because many residents stored their garbage in containers with poorly fitting lids, or no lids at all, in temperatures exceeding 100 degrees. The community’s quality of life suffered as a result.

In 1969, armed with a federal grant, Public Works Director Marc Stragier led the team to improve residential collection technology. Charged by City Manager Bill Donaldson with making collection more economical, Stragier realized that the key was city-provided uniform containers. Armed with this information, they created “Godzilla.” It gobbled up trash and paved the way for the advancement of residential refuse collection equipment technology.

And they kept iterating and innovating. “Son of Godzilla” arrived in 1970 and improved on collection timing. In 1972 Scottsdale developed a truck dubbed the “Litter Pig” that specialized in curbside refuse collection and increased productivity. Today, Scottsdale has a fleet of 54 fully automated trucks fueled by compressed natural gas provide state-of-the-art service to the community. Containers can be emptied in 6 seconds compared to 30 seconds for “Godzilla”! This innovation hasn’t just changed trash collection in Scottsdale, as there are now automated vehicles in communities around the world. 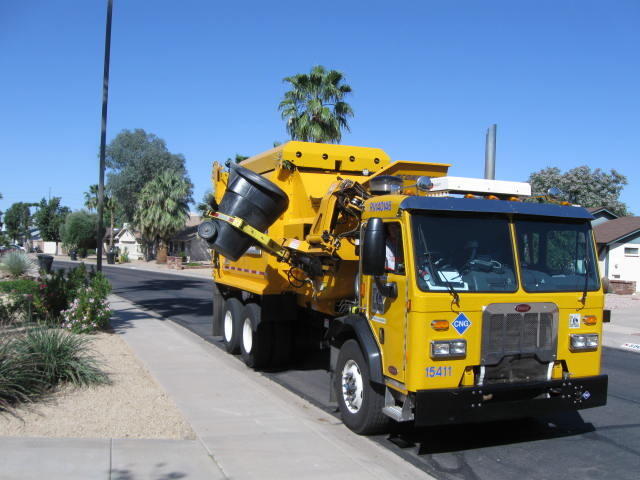 I love this story and tell it at every New Employee Orientation. I think it’s important to understand our innovative heritage and to always encourage employees to keep innovating. I think a key point of this story is that they didn’t innovate to save money, they innovated to improve lives. The lives of workers and their families were improved, as was the quality of life of residents through this innovation. We must never stop innovating to improve the quality of life of our communities.

I’ve inherited a copy of a speech given in 1970 by the Scottsdale City Manager from the time of Godzilla, Bill Donaldson. The sentiments in this classic speech inspires me and other Scottsdale employees on our High Performance and Innovation Team, as well as attendees at our recent Innovation Hackathon, and I thought it would be best to let Bill’s inspirational words inspire you as well.

“The prelude to successful creative management is the evolution of a new kind of thinking process among all the people concerned.” Bill Donaldson (1970)

“As we land on the moon, we seem unable to pick up trash without endless hours of drudgery. Innumerable experts want to offer advice about what to do with refuse. The fact that 70% of the cost of refuse disposal is involved in picking up the material rather than disposing of it is ignored. If that cost could be cut in half, monies would be available to subsidize re-cycling of refuse. In Scottsdale, with limited technical knowledge, we have designed a refuse system that does just that — cut the costs in half. We have done this by providing containers for homeowners which are large enough and uniform enough that they can be handled mechanically. Let me tell you what we are doing. The whole operation of this unpleasant job can be handled by a single operator flipping switches in an air-conditioned cab. And it saves the city $200,000 a year.”

“We’ve lots of innovations, dreaming them up because every staffer is encouraged to think different; to think new… Now these innovations didn’t just happen and believe me we had plenty of failures along the way. The prelude to successful creative management is the evolution of a new kind of thinking process among all the people concerned. This is the one and only key. If you can learn to use it you can unlock a new world. It isn’t easy. The important part is that it’s possible.”

“A city is also a place for learning; a place where creativity can be fostered. But neither in a city nor in a business will creativity happen by itself. It can only happen — repeat only happen — as a result of deliberate and courageous policy. There must be a climate for creativity and innovation. The city manager and department heads must set and control the thermostats to produce conditions in which they can exercise and gradually strengthen their powers to innovate…”

“Back of them, of course, must be a council with the perception to realize that whatever has been effective in administering cities in the past is now at the very least suspect. We must believe there is almost certainly a better way of doing anything we ever did if only we are smart enough to figure out what it is.”

“Many of us are cast in a mould from which it seems almost impossible to change shape. Most institutions, including cities, develop a bureaucracy which is built to withstand change. If it isn’t strong and rigid it may blow down in a strong wind. The strength of a bureaucracy is, indeed, its capacity to oppose change. Uniformity of procedure, consistency of action, predictable responses to any variation of circumstances — this is the direct opposite of the independent thinking we need to encourage. The mould holds us tight.”

“Let us first direct ourselves toward the innumerable leaky faucets in our cities, the little things needing to be fixed. They may be baffling but we can overcome them through liberal use of our imaginations laced with generous doses of courage. If you can get that recipe for innovation working in your job, you’re in for rewarding achievement.”

I hope you are as inspired as I am about this legacy of innovation that we’ve inherited and are building on here in Scottsdale.

More about Bill Donaldson and Godzilla

Bill’s son, ELGL member David Donaldson, currently serves as the City of Beaverton, Oregon Public Works Director, and was interviewed for this ELGL post about Growing Up in City Hall: Life as a City Manager’s Child (2014)

Bill Donaldson also worked in Beverly Hills, Tacoma and Cincinnati before becoming the Philadelphia Zoo Director. He was Scottsdale city manager from 1965-1971. He passed away at aged 60 in 1991. Here is his obituary from the New York Times.

The New York Times wrote an article about Bill Donaldson’s experience as director of the Philadelphia Zoo, where he could work with “animals who did not talk back.” A City Manager Builds a New Life as President of Philadelphia’s Zoo (1979)

Bill received an award from ICMA in 1970 for the 34 innovations that Scottsdale staff implemented in 5 years. This city newsletter from Fall 1970 tells the story of Bill’s award and also of the Godzilla innovation.

Scottsdale employees for many years have been honored each December at the Employee Awards Ceremony with the  Bill Donaldson Award for Risk-taking and innovation. For more on how Scottsdale honors its employees, read my #MorningBuzz from August 11, 2019.

If you want to dive deeper, here are some articles I used as resources, I’ve only scratched the surface of this story, and am thankful to the Scottsdale Public Library for a deep well of historic resources and images from which to draw:

The History of Refuse Collection in Scottsdale, Arizona (video)

Brent Stockwell is an assistant city manager for Scottsdale, Arizona, where he has worked since 2002 in a variety of roles, and also worked for Mesa, Arizona and Federal Way, Washington. He earned degrees from Kansas State University and the University of Washington. He was awarded with the Bill Donaldson Award in 2008. He’s happily married with three kids and a mini-goldendoodle. Brent’s on Twitter, Instagram and LinkedIn.