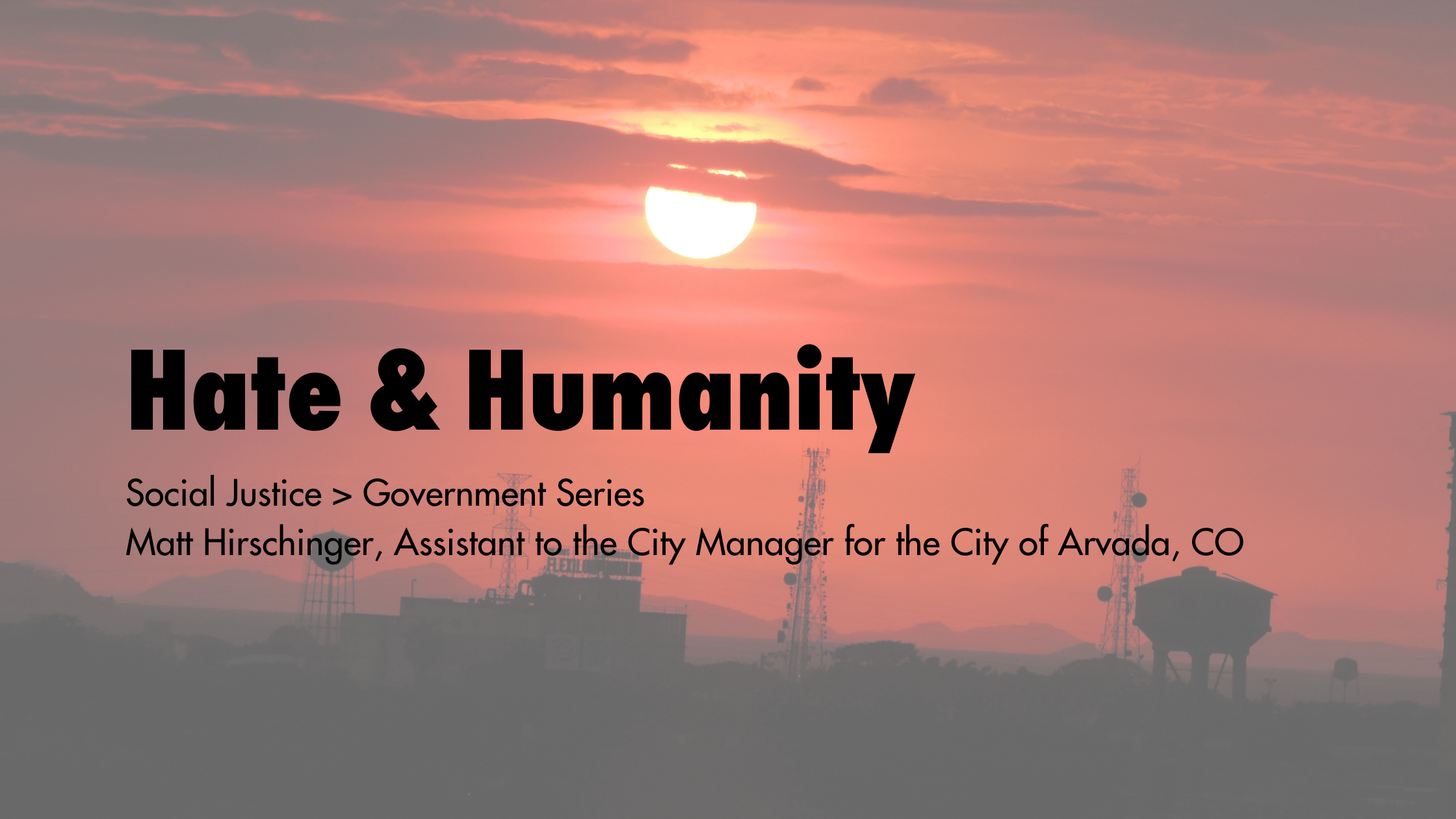 This guest article is by ELGL member Matt Hirschinger, Assistant to the City Manager for the City of Arvada, CO. Read all of Matt’s other articles at the Social Justice –> Government homepage.

Those of us who advocate for social justice within local government largely contend with changing the status quo, with trying to make systemic changes to policies, programs, and operations. There is also the existence and persistence of more extreme, more overt forms of hate. Hate groups do endure, white supremacy ideologies are believed by people across the country, and all state and national issues have a local component. After all, the Unite the Right Rally in Charlottesville, Virginia appeared to be a national incident for many of us, but to the harassed and threatened local officials, those who had to contend with the targeted cyber-attacks on the city, and the legal professionals contending with the future lawsuit when a second rally the year after was denied, this was a local matter.

And this isn’t to even cover how many of the Unite the Right Rally attendees came from other cities, towns, and counties, maybe even ours.

This post is about the hardest lesson I took away from the Hate Groups and Group Violence course I took. Although learning more about the conspiracies and agendas of such groups was challenging, what was even more difficult was to watch and read about the humanity of those who adhere to the most extreme forms of prejudice. It was watching the mother and father inducted into white supremacy while supporting their incarcerated son, the stories from sociologists of white supremacists first joining out of a need for community and belonging, of families with similar day-to-day, year-to-year challenges.

HERE is my second of two position papers for the course that digs more into the idea of belonging and community as tools to fight against extremism.

It’s hard. The Unite the Right Rally is the single most impactful event that pushed me to pursue my own education and work in equity. I personally could not reconcile doing nothing after witnessing literal Nazis waving Swastika flags and seeing nowhere near unified condemnation of it.

I do not want to accept any shared humanity with them. I want to distance my own identity as much as possible as an American, as a Caucasian male, as a person. There is so much evidence though that closing that distance works better. We know that there is a calculated strategy and noticeable results by giving respect and dignity to those who do not deserve it, especially to those who do not deserve it. Gandhi, Daryl Davis, and far more have shown how powerful an open and extended hand can be.

Let’s take a step back as many of us won’t engage directly with such extremism found in the KKK, Neo-Nazis, Christian Identity, and others. All of us who try to push forward social justice in our respective communities will still come across other forms of bigotry from dog whistles to defensiveness, to willful ignorance. In those moments, too, there will be the desire to distance ourselves yet again, to feel we are doing our best, that we are doing what’s right, and they are not.

We are better served when we accept the hard truth that they are part of the community we serve too, to recognize what commonalities we have, and use the discomfort and awareness of that closeness to guide our actions. The prejudiced individual we characterize as without redemption serves as a dead-end to our work. The prejudiced individual we characterize as someone with their own hopes, dreams, faults, and fears are someone we can attempt to build a bridge with however challenging it may be. This doesn’t mean we need to befriend someone with such views, nor does it mean they hold no personal responsibility. Far from it, we need to take care of ourselves first and not put the feelings of those with prejudicial views on a pillar. It means that for our own perspective, for our own actions knowing the hard truth that someone can be nice to us and prejudiced to others, that someone can accomplish great work and also treat others wrong, can mean well and cause harm makes us grounded.

In the media, we often love the sin and hate the sinner. We applaud when an influential person is caught saying something racist and then is fired or somehow publicly shamed. Too little is there any follow-up discussion on how to change the systems and structures that allowed such influential people to act on their prejudices for years, even decades. Although I don’t recommend we simply let people off the hook for hate, I do think that focus is misplaced when we can accomplish more by giving attention to the environments, policies, and learnings that can make the difference moving forward.

My ask is that as we engage for a more equitable local government, accept that some people will say no, others will be silent, and there will be those who try to walk away. I ask to understand that they are not somehow an abnormality of our organization and jurisdiction, but instead are reflective of it. Take the time when possible to figure out why, to listen, to connect, and to use that information to be more aware and capable in our work than if we simply wrote them off. Find out what are the policies, the systems, the institutional norms that allow it, and then take action.