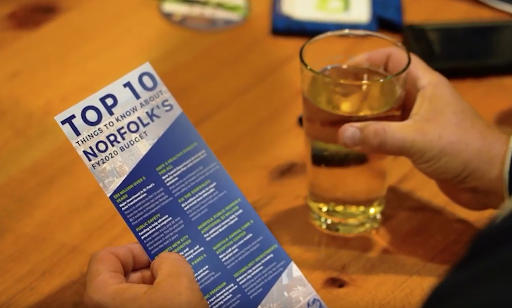 What has been your biggest challenge in engaging the public about the budget? How did you address it?

“These events are awesome, see you at the next one!” Charla was at her second Budget and Brews event when she declared herself a ‘budget groupie.’ She was thrilled to have a chance to chat with Norfolk’s Budget Director over coffee.

I’m a Senior Budget and Policy Analyst for Norfolk, Virginia – a city of about 246,000 people. Right now, we are gearing up for the decision-making stage of our budget cycle. It’s a long and sometimes stressful process… but I love it. That is a good thing since a big part of my job is to help other people love it too. Or at the very least, become engaged in the budget process. And believe me – that is hard work!

There are three primary challenges to public budget engagement: To make it meaningful, to make it fun, and to reach a diverse audience.

One of my first tasks was to identify best practices and recommend a strategy for budget engagement. I figured – I’ve planned events before, so no sweat, right? Well, there was a catch. We were facing a $13.3 million budget gap. And, as it turned out, we’d be proposing a substantial real estate tax increase too.

The first year we held three public events with the City Manager’s support. We scheduled the events early in the process. We explained the cause of the budget gap. We led an activity and collected valuable information about budget preferences. Our residents left with a greater understanding of the city’s challenges. On most counts, it was meaningful. But it’s difficult to count an event as a success when staff outnumber residents.

We had to change our approach. The reality is, most people don’t have the time, energy, or interest to attend a two-hour budget event. We needed to meet people where they are, instead of asking them to come to us. So, we went online. We launched a budget simulation through Balancing Act, and bolstered our marketing to increase participation. It worked! Using Balancing Act, we increased our reach from about 100 residents to over 1,000, and made budget information more accessible. We also reduced staff time from around 300 hours to 50.

The second challenge is to make it fun – to design engagement so enjoyable that people actually ask you to come back. ‘Encore!’ is not something government employees hear very often.

We have been experimenting with ways to make budget engagement more fun. Last year our IT staff designed a unique online game called the ‘Budget Bracket Challenge.’ This march-madness style bracket challenge randomly paired city services against one another, forcing residents to identify their priorities for additional funding in the budget. This was done live at civic leagues with voting tools so residents could see how their preferences compared to their neighbors.

Usually the game started with eye-rolls. But soon enough residents were debating each other over the merits of providing more funding to economic development projects over social services over police. One resident, after being in the minority on multiple votes in a row, declared in disbelief “Who am I living next to?!”

The third challenge is to reach a diverse audience. Race, age, ethnicity, geographic location – these are all important. It is also important to expand our reach to those who don’t participate in the traditional ways (because, life), and those who don’t think about how government decisions impact their daily lives.

Our solution this time was ‘Budget and Brews,’ a series of events in which our Budget Director and one or two other department leaders took over the corner of a local brewery or coffee shop to chat with residents about the budget. People loved this idea – including Charla, our resident budget groupie.

It isn’t very often that residents get to chat with government officials in an informal setting. It helps to remind residents that the people making decisions are just that – people. Which makes it easier to ask that question that they’ve always wondered or share a concern to someone who might be able to do something about it. Not to mention, it is significantly less intimidating than a three minute speech at a formal televised budget hearing.

Informing and empowering residents builds trust in government and leads to better decision-making. If we can engage more residents in the process, even for a quick question over coffee or beer, our city will be better for it.