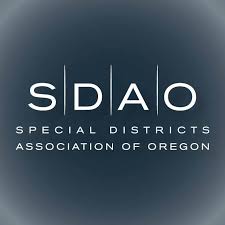 Since starting my journey with Special Districts Association of Oregon (SDAO) about six years ago, I have gone from knowing nothing about local government to being continually impressed by it. Each day that I work with SDAO, I am amazed at how our state’s special districts can work on projects and deliver such high-quality services with often very limited resources. So finding just three special districts that I find to be innovative was quite a challenge! The majority of SDAO members operate on an annual budget of less than $150,000 so creativity is truly at the core of their operations. However, in sticking with the task at hand, I chose to focus on the Port of Morrow, Roseburg Urban Sanitary Authority, and Keno Rural Fire Protection District.

Port of Morrow is one of 23 ports in Oregon. Ports are a key component in sustaining Oregon’s economy and quality of life, supporting thousands of family wage jobs. It is said that one out of six Oregon jobs is directly or indirectly tied to activities at our state’s ports. Port of Morrow was created in 1958 and started with just a $500 loan. Beginning in the early 1960s, the port started acquiring industrial and harbor land, working with the U.S. Corps of Engineers, local landowners, and the State of Oregon.

In order to attract business, the port had to develop the infrastructure to support future growth. They focused on acquiring the funds to develop that infrastructure so that they could attract businesses. They slowly started working on developing the roads and main lines so that when a company was ready to come in to the port, the port was ready to support them. They foresaw several opportunities to grow the port and took advantage of everything that came their way. Since this development, they are consistently attracting new business. Today, Port of Morrow has grown to be the second largest port in the state of Oregon and are the reason that Morrow County is the third highest wage county in the state.

In 1997, Roseburg Urban Sanitary Authority (RUSA) began to purchase property with the idea of utilizing the wastewater effluent in some sort of land application method. In 2006, DEQ completed its total maximum daily load (TMDL) study for the South Umpqua River. The new TMDL would affect RUSA discharge limits with regard to the pounds of phosphorus and nitrogen that could be released into the river during the summer months. The study also focused on the temperature of the effluent released to the river in these months. To help address the pending discharge limits established by the DEQ in accordance with the study, RUSA designed and built the natural treatment system (NTS) to polish the treated effluent from the Roseburg Regional Wastewater Treatment Facility to further protect the water quality of the South Umpqua River. (Source: Roseburg Urban Sanitary Authority, www.rusa-or.org)

The NTS is having a positive effect on not only the dissolved oxygen and pH levels in the South Umpqua River during the hot summer months, but also provides additional environmental benefits to the river such as cooling of the stream water temperature. 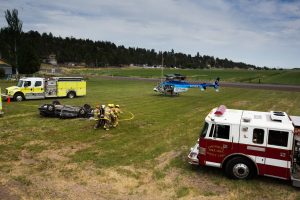 Unfortunately, wildfires are becoming an increasing problem in Oregon. Preparing residents for risks related to these events is a top priority for many fire districts. Keno Rural Fire Protection District (RFPD) serves a population of just 3,500 people and is nestled in the wildland-urban interface. Communities in these types of locations are at risk of catastrophic wildfire. Over a period of about 15 years, the fire district collected data using satellite imagery, ground surveys and individual home surveys. They assessed all 1,700 homes in the district and during these visits, were able to install 500 smoke alarms.

The district worked with a company to develop a cloud-based program that would provide homeowners with information about their specific risk level. Individuals can access the website and search their address to view their individualized risk assessment. This report identifies the home’s overall hazard and outlines its susceptibility to wildfire damage. It also provides information to the homeowner about what they can do to lower their level of risk.

Keno RFPD developed an informational booklet in conjunction with Oregon State University Extension Service that they can distribute to homeowners. This booklet provides information about how to create defensible space around your home and details the specific areas for the homeowner to focus on.

I truly can’t say enough about how inspiring our special districts are and am grateful to work for this association that supports their efforts.