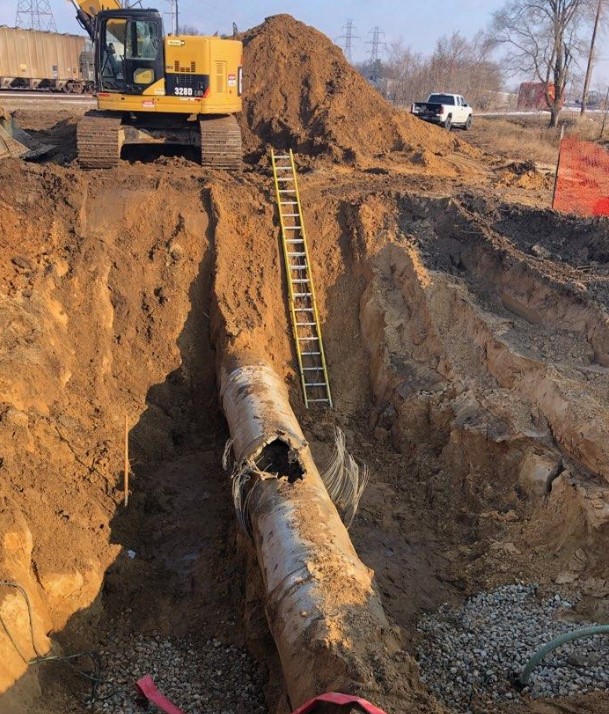 In this series, guest columnists respond to one of three topics selected by ELGL co-founder Kent Wyatt. This week, Jessica VanderKolk, Communications Manager, City of Battle Creek, Michigan, writes about responding to a water main break.

Hopefully many of us prepare in some way for when an emergency strikes, whether by taking FEMA training courses, helping write or at least knowing who possesses the Emergency Operations Plan, participating in practice exercises with staff, or even just stewing about what you would do in your role.

As the lone communications professional for our city organization, I’ve done all of those, though most of them came after several serious incidents in the last two years. The longer I serve my organization, the more serious I feel about ensuring we plan appropriately for emergencies.

Nonetheless, I’m extremely proud of our team and the way we reacted to each of these incidents. I want to tell you about the most recent – how it happened, how we responded, where we succeeded (and got lucky), and notes we made for the future.

On Feb. 19, a contractor struck one of our 30-inch water mains, breaking it, and creating an immediate loss of pressure to that section of our city water system – I’m told there was about an eight-foot geyser out of the pipe break.

This resulted in a system-wide boil water advisory for about 29 hours.

With such a big break, our system operators noticed immediately that something was wrong. Within 50 minutes, they had shut off water valves and isolated the break, and our utility administrator was on the phone to our city manager, and to me. We issued the boil water advisory within an hour of the break.

The moment I started prepping the advisory, my phone started ringing, and the Facebook messages started rolling in, as neighbors discovered they were without water (the outage was brief). I am fortunate to have support staff in my office to take care of the phones, and Facebook had to wait.

There is nothing like trying something new when you’re in the middle of a crisis; rookie mistake, I know. As I pushed the advisory out through our channels, I remembered that our website (through CivicPlus) has the capacity to show a blinking red alert bar at the top of our home page (and every page, as it turns out). Having never used this feature, and wanting to in this circumstance, I was on the phone to our IT director to figure it out.

We stumbled a bit, but did it. Doing it incorrectly at first caused a delay in the text/email alert distributed to subscribers, but we discovered the issue and corrected it.

Within another hour, we held a press conference, which I broadcast on Facebook Live – another feature we started using in the last year. We were able to have an American Sign Language interpreter assist, something we have worked on as part of our language access improvements – we have known hearing impaired, Spanish-speaking, and Burmese communities that want and deserve all of the information we share.

One of the great results of this is that the local support organization for our Latino and Hispanic families translated the entire boil advisory, which is a standard template we use for every boil advisory we send. This allows us now to automatically post and share boil water advisories bilingually. Our team member who handles most of our language access work collaborated with the local Burmese community support organization to produce a video translation of the advisory. We know through our work that this community struggles with illiteracy, and video messaging is helpful to them.

I manage the city’s main social media accounts mostly on my own. That meant that, after business hours, I pulled up my laptop and answered the dozens of questions people ask during an incident like this – can they shower, is the city distributing water, why is the water pressure weird, is this why my water is discolored, how long will this last, and on and on. We also received some comments thanking us for the response and communication, and acknowledging that accidents happen. I always am grateful when people choose to take a moment to do this; we all know that people do not often comment when things are going right. I, in turn, took a moment to like and thank those commenters.

A couple of other positive notes – While unfortunate at the time, I learned that my phone does not produce great audio during a Facebook Live broadcast. I have since purchased an external microphone that seems to be working so far. We also were able to educate our community that they can sign up for water system alerts through our website (and that we do not promote this enough); we received comments that people were not aware of this, and were grateful to take that action.

In all, this was a mainly two-week incident (with some months of investigation after), from water main break to water main coming back online. I take immense pride in our team’s work together, and with our greater community, to make sure our neighbors are safe and informed. We always have ways to improve, but it feels good to work successfully through an emergency.