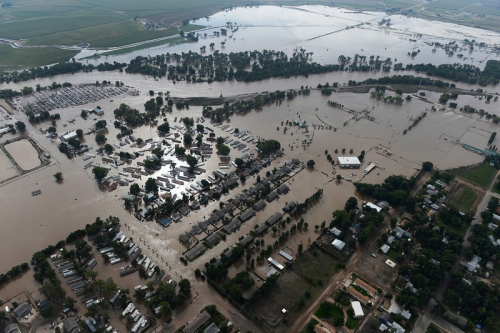 In this series, guest columnists respond to one of three topics selected by ELGL co-founder Kent Wyatt. This week Zach Ratkai, City of Richland, WA, writes about responding to the 2013 Colorado floods.

When ELGL asked me if my perspective changed after working for in local government during and after the 2013 Colorado floods, my immediate answer was “yes, of course.” But then I dug a bit deeper into my memory and asked myself “how?” Off the cuff, I would be compelled to discuss my experience with emergency management, assessment of damaged buildings, lobbying the state and federal government for help, but no. Working for local government in the midst of disaster and through the daunting and arduous recovery process opened my eyes to the deeper issue of authenticity in government, the transparency through which it needs to operate, and the assumptions the public makes regarding our work; not just in disaster recovery, but every single day.
In 2017, the United States has been wrought with hurricane and fires, and we are seeing the same assumptions about speed of recovery and role of government being made. Sides have already been taken in the public’s determination of how effective the recovery effort is. However, the assumptions of the effectiveness of local government go far beyond disaster recovery and is now becoming an everyday event for public officials.
My direct disaster experience begins here: In September of 2013, heavy rains and slow-moving storms dumped rain on Northern Colorado, causing the flooding of two mountain river systems, the Big Thompson River and the St. Vrain River. At the time, I was the Community Development Manager for the City of Evans, Colorado, a community of 20,000 on the banks of the South Platte River, just downstream of where the St. Vrain and Big Thompson made tributary. On Friday the 13th, the floods from the mountains impacted our high plains community heavily, taking out nearly 300 residences and one of the city’s wastewater plants. The 1000 year storms that always “happened to other cities” was happening in real time, and we were in deep water (pun intended).

During this time, staff worked to provide the public with the most current and best information possible and our public information team was second to none. However, I saw that the TV news stories and the rumors being spread were still different despite our efforts. Our PIOs were putting out the truth of our daily work, I was mystified at what the media portrayed to the public. Often the wrong story was told, or b-roll for a newscast was of a completely different area – often showing something more disastrous than what was actually on the ground. They were quick to identify something that was out of place in the effort, but slow to correct the mistake when pointed out.
Soon after, the initial response ended and our federal and state responders moved on, the marathon of recovery began for the city. Recovery is a long, arduous process, often forgotten in the eyes of the public. Just a couple weeks ago, the final recovery items were closed for the 1994 Northridge earthquake in California, while Katrina and Sandy recoveries roll on. So, in a sense, recovery takes time.
In 2015, I was appointed as Flood Recovery Manager for the city, the 3rd person to take on this role, and not the last. My biggest tasks were managing a federal audit, reimbursements through FEMA and CDBG-DR, and management of temporary staff (in addition to my own community development staff). An apparent important task; however, was information management. Two years after the flood hit, some roads were still not repaired and some residents were still displaced. Private property financial assistance from other levels of government was slow to come and many residents took on their repairs and property maintenance on their own. I often would receive inquiry from the public or the media regarding our “inaction.” While my first couple inquiries of this sort caught me off guard, but then I realized that just as important as managing financial and social recovery, was also the management of information and the broadcast of updates. From there, I formed relationships with the media, worked with the city’s communication staff to utilize social media for consistent progress reports, scheduled regular updates to City Council and even wrote an article for the local paper regarding the process.

The Evans Flood Story from Evans Colorado on Vimeo.
What struck me during this time, was greater than the disaster itself—it was the assumption of how government is run, and its role for the people. Often, when confronted by the media or the public itself, it was assumed we were doing nothing, simply based on the glacial pace of recovery. However, we were working daily, working hard, and working well for the community and, as I liked to point out to the community at large, we were just as frustrated at the arduous reimbursement process and really wanted to just get to work repairing roads and rebuilding Riverside Park.
Much like everything we do in local government, and probably my biggest reminder from the 2013 disasters, is to remain authentic and transparent in our work for the community. Local government was previously shielded from the angst and consternation the public held for state and federal levels, but now that story has changed. As local government, we are the most-accessible and most impactful level of government to the community. Building and maintaining trust is key to quelling this wave of opinion about government, and the best means by which we build trust is open government. It is paramount we remain authentic and transparent in everything we do, in order to stave off assumption, which can drive a bad culture in the community and harm relationship with the public, particularly In the wake of a disaster, when the public is looking to their government the most.

Zach Ratkai currently serves as the Economic Development Manager for the City of Richland, Washington.