Today’s Morning Buzz is brought to you by Kendra Davis, Management Analyst with Arapahoe County, CO. Find her on Twitter @KendraHwa and on IG (but only if you like occasional stories about outfits and dogs!)

What I’m Listening To: Nicole Byers and Sasheer Zamata’s podcast, “Best Friends” because it’s honestly how I imagine my best friend and I sounding, except we’re a tiny bit less hilarious.

What I’m Watching: Tyler Henry’s Life After Death on Netflix because apparently I like crying while also feeling awkward and skeptical?

What I’m Reading: Healing Ourselves by Naboru Muramoto and Spiritual Midwifery by Ina May Gaskin because I am obsessed with alternative medicines and remedies right now.

Recently, a coworker and I had a conversation about our organization’s dress code because I was talking about whether wearing a jumpsuit would push its conservative boundaries. My coworker asked me what I meant by “dress code.” I explained, and he admitted he had never worked for an organization that regulated what you could wear (full disclosure, he has not worked that many places). But it made me wonder if the concept of dress codes is even relevant in today’s world with individual liberty, broadening social acceptance and cultural representation on the rise. Considering the role perception plays in local government, how much responsibility do we have to our image and how others perceive it in 2022?

Five years ago, Kylie Bayer-Fertterer in her infinite wisdom that honestly predicted her current role as Head HR Bish (working title), wrote this hot take on dress codes. While it ranges from mildly objectionable (men in tshirts) to wildly offensive (#FlipFlopGate) to best idea ever (conference overalls), I think it illustrates that dress codes are inherently opinions written by people and can include almost anything, including our unconscious or inherent biases. Over recent years, school dress codes have been at the forefront of conversation for both sexist and racist restrictions, though some studies have pointed out that the real concern is that they are disproportionately enforced.

In a media training, I heard that 85% of what your audience takes away from your presentation is visual. For better or worse, how we look and present ourselves MATTERS, and the trainer providing this statistic wanted to emphasize that we do ourselves a disservice when we present ourselves in a way that distracts from the message we’re trying to get across.

Now there’s a lot to unpack with that. Also, as I find myself all too often acknowledging in local government and beyond, our presenter was a middle class white male who may have a different experience with image and perception than someone with different identities. In fact, when I combed the articles on ELGL that reference dress codes (that I could find), they were all written by white or white-passing members.

To me, this is a reminder that dress codes are designed to encourage a specific image, usually one that mirrors the dominant culture (read: white folks). One of the recent articles on dress codes mentions the idea of dressing or looking your best, which honestly sends me into kind of a spiral.

What does “best” even mean?

Who is defining this?

And what if my version of best isn’t the same as yours?

To be frank, my version of best is probably too colorful and pattern-heavy to meet anyone’s standards, but I’ve gotten pretty good at riding the fine line between kooky and professional – kind of my preferred lane at this point. But I was also raised in a partially white, fully Midwestern family, so I’m familiar with the unspoken cultural expectations of a dress code. And things that represent my cultural background aren’t threatening to those in power. But what about those who have a dramatically different culture they have to put to the side? 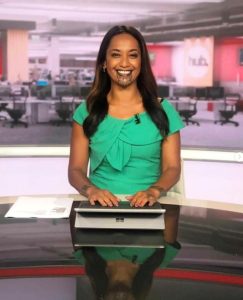 Oriini Kaipara recently became the first person to report broadcast news with a moko kauae, or a traditional Māori chin tattoo. Facial tattoos are often a non-starter, culturally relevant or not. That goes for traditional dress or hairstyles, too. It was important to Kaipara that she honor her Māori heritage and visually celebrate it, hoping to inspire the next generation and perpetuate a disappearing culture. In an article about Congressional dress codes, Senator Cynthia Mendes of Rhode Island cautioned that dress codes represent “colonization language. The need to remind everyone who is in power. It has always started with what you tell them to do with their bodies.”

Dress codes are about power, even if they are also about decorum and respectability. They are designed to produce a specific type of employee, student or even Congressional leader. And though this buzz focuses largely on cultural expression, the idea of gender identity and how we express that through our dress continues to be significant. As our communities continue becoming more diverse and representative of  a broader scope of ethnicities, religions, cultures and identities, these questions will be increasingly relevant. Think about how your organization’s dress code helps or hinders your organization and staff. Do you really think someone is doing a better job because their hair is a certain color or they’re wearing pencil skirt?