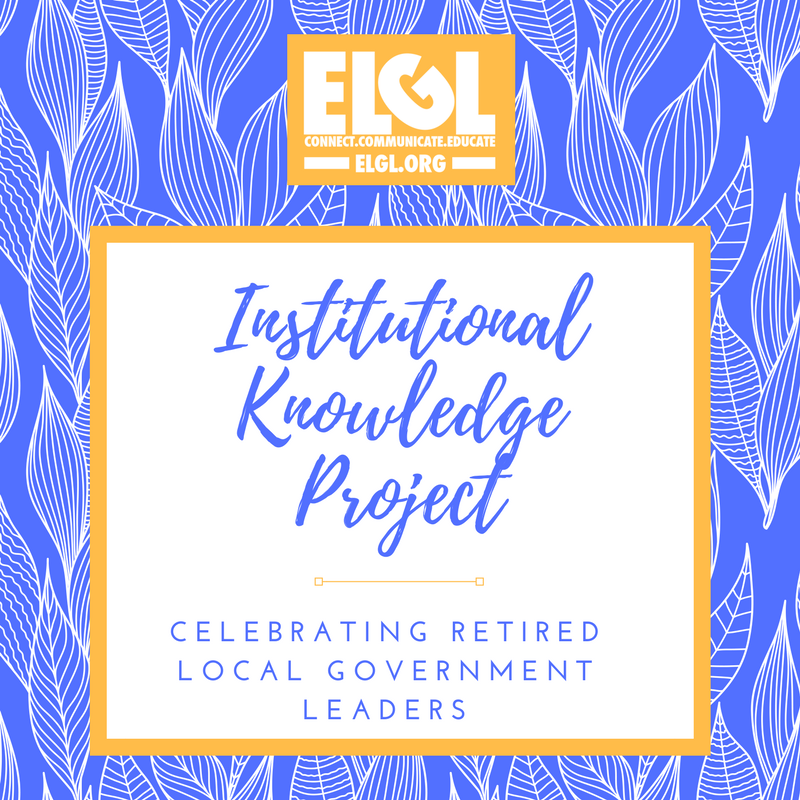 In the Institutional Knowledge project, we are recording the wisdom and experience of retiring and retired leaders in local government. If you know someone who could add something to this project, let me know! You can reach out to me on Twitter/ LinkedIn or send me an email.

As a part of this project, I have had the wonderful opportunity to meet some incredible government leaders. I absolutely loved chatting with Lew Quigley. He has such a great sense of humor and is full of wisdom for local government leaders. Here’s the first half of the interview with Lew.  A BIG thanks to Laura Savage, ELGL member, for introducing Lew and me.

What’s the worst advice that you’ve received? The best?

The best advice that I received as a government official, and that I share with others, is: whenever you have an opportunity to do something more or provide another service, you ought to take advantage of that. Try to make yourself available for every opportunity in the government. Management is basically the same whether you’re a city administrator, fire chief, or public works director. So get as much experience as possible.

On the back of my business card, I have a saying: “If you want to be a successful manager, surround yourself with good people, and then have the sense to let them do their job.” So my advice to manager is: Hire good people. Let them know what you expect from them. And then allow them to do their job. Managers get in trouble, in my opinion, when they think that they need to make every decision.

One more piece of advice that I would give leaders: any time there is an administrative decision, let that decision be made at the lowest level possible. Sometimes the janitor knows more about a particular issue than the person in charge. Always be aware that you aren’t the only person that has the ability and knowledge to make a decision.

I recently read an article about you mentioned that you always have a toothpick in your mouth. Will you tell us about that?

That’s one of the criteria that I use when I’m hiring: fit. I don’t care how smart you are; I don’t care how intellectual you are. That’s not what’s important. If you don’t fit in the community, it ain’t ever going to work. Managers should always look at whether or not the job applicants will fit. If they don’t fit, they simply won’t ever make it in the job.

Managers, and other public employees, sometimes forget where their role lies in government. In the decision-making process, the professional side should provide the elected official with the most correct information. That’s their whole task. The political side then side steps in and makes the decision. If managers get involved with decisions politically, their effectiveness is diminished. The managers and the staff are not the decision makers, and sometimes they forget that. The elected officials are the bosses, and we just get the job done for them.

Along that same line of thought, we must never forget that the government exists to serve the people

. I don’t really understand all of the turmoil and upheaval that I see today. It seems that people have forgotten that public servants
should be working to make life better for all people, not just a select few.

I’ve had the chance now to serve as an elected official as well. It’s been difficult to not work as a manager in this new position. But I’ve tried to remember that now I make policy decisions, and allow someone else to worry about the administrative side. If there are public employees interested in becoming elected officials, I would say that being elected is just one more way to serve the community.