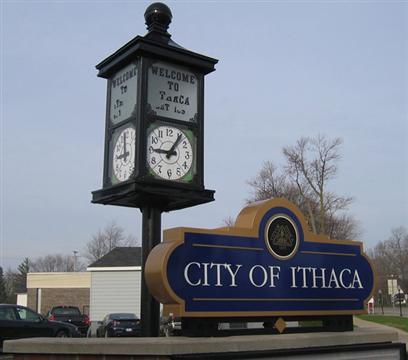 Today we bring to you a special excerpt from ELGL member Siba I. El-Samra. She is a recent Cornell University graduate with dual Masters’ in Landscape Architecture and City & Regional Planning. Originally from Lebanon, El-Samra studied Landscape Design & Ecosystem Management and Agricultural Engineering at the American University of Beirut. She is specifically interested in the role local government plays as a liaison between the public and higher levels of government as well as the role of design in informing local government officials.

In the fall of 2013, El-Samra had the opportunity to interview Ithaca, NY mayor, Svante Myrick, as part of her Planning Practice and Theory class with Professor John Forrester. Mayor Myrick is the youngest person to hold the office in Ithaca and is the city’s first African American mayor. At the young age of 27, Myrick is one of the youngest mayors in our country’s history and one of the few to be popularly elected by a citywide vote. During her interview, El-Samra probed Mayor Myrick about the challenges he faces in his field, given his young age, and how he feels about being a direct link between the people of Ithaca and its government.

We share below, an excerpt from the Myrick interview that offers a revealing glimpse into the mind of a young politician and the education he has gained along the way.

From Student to Mayor: Lessons About Politics* 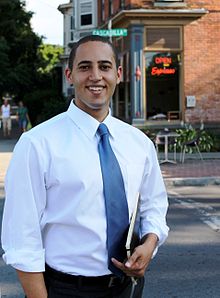 “I was elected [to the city council] without an opponent, and I started serving half way through my junior year in college. I learned [a lot] about the pace of things—that the pace was slow. I [had] thought [that] things happened like this (snapping his fingers, quickly, several times) but, you know, little did I know the way it [really] works!
You introduce a concept in January, and you form a committee in February, and then the committee works until June, and then in turn it reports to the [Council], and in July the committee votes maybe, and then in August . . .— maybe that’s the fastest possible. I thought I’d bring an idea into a meeting in January (he slaps the table), and we’ll do it in January! (he slaps the table again), and [then] we’ll just move on. That’s not at all how it worked. That was a big wakeup call.
I learned, too, one of the realities of politics, which is that there is more to winning the argument than just having the best argument. Coming out of school, you think you’ve got to write a paper. So you’d write the best paper [with] the best ideas in it, and you’d hand it in and you’d get an A, so you won, [you got what you wanted]. [So] I’d go to the [Council] meetings and think, ‘Ok, so it’s our side versus their side—and we’re outnumbered: there [are] seven on that side and there [are] three on our side. What I’ll do is I’ll write the most convincing paper with the best points’—and I’d spend hours on it—and then I’d hand it out to the committee, and the committee would go, ‘Aha, yeah, whatever, so listen…’ (he laughs), and then they would vote and there’d be seven votes to [our] three, and I’d say, ‘What the heck happened?’
I’d thought [that] if I handed in the paper with the best arguments I’d win. But it’s about more than that; it’s about recognizing people’s own biases, and your own biases. [It’s about] thinking about what’s best for the person that you’re trying to convince in that constituency. That’s not always the same, you know.
I’m now recognizing—[that it’s] a naïve idea that people would vote for something if it was in the best interest of their city even if it went against the wishes of their constituents. For example, if you lived in a certain neighborhood, and something was going to be not so good for that neighborhood, but better for everybody else in the city, I thought people would vote for it—[but], of course, that’s not how it works.
So, I think, if anything, I learned [about] the pace of city government—and I hadn’t yet learned what it took to win, but I learned that what didn’t win was those arguments, and I was just marshaling those.