Kent Wyatt – LinkedIn and Twitter – provides the latest in local government, pop culture, and random musings in this members-only post.

Leaving on a Jet Plane

A 3-year old. A 5-year old. Me. We’re all boarding a flight tomorrow for Raleigh, NC. My kids will be spending an extended weekend with the grandparents in Chapel Hill, NC while I am drive two hours west to Charlotte, NC for the NCAA Tournament. But before I can think about the kid-free weekend, the lingering question remains on how to entertain two kids on a plane for five hours. Without SkyMall magazine to kick around anymore, I’ll have to rely on the iPad, knock-knock jokes and the drink cart. I welcome any suggestions that you have on entertaining the kiddos on a long flight. Movies? Games? Imaginary friends?

In Wash. state, a 10-person team toils for the government — selling pot
White House 2016 budget in 3D using Power Map for Excel
Arizona Lawmakers Debate Whether Gun Rights Were Given To Them By God (VIDEO)
A Single Day on the London Tube, Condensed Into 2 Minutes
Our cities must undergo a revolution for older people

Who Needs Green Beer?
I celebrate St. Patrick’s Day away from the bars and in front of my computer watching these two videos. 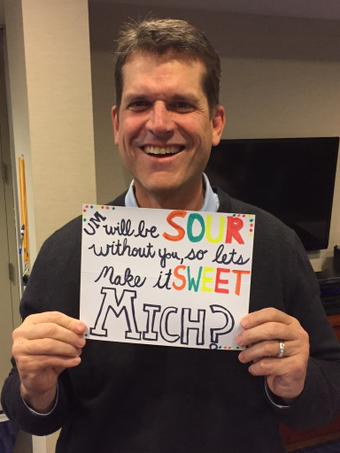 Before you settle down to complete your bracket for the ELGL bracket challenge, get up to speed on the internet of things via SB Nation – The Worst Internet Things Bracket. A few of our favorite “teams”:

Twitter can be a tropical paradise when you’re hunting for a new job. A couple of Twitter feeds to check out are EconDev Today and PRSA Job Center.

Why you should love March Madness….

Now that you’re ready for March, sign up for the 4th annual ELGL Bracket Challenge.

Sort of. The League of Wisconsin Municipalities has more than 100 job postings on their website. Government Jobs has 22,304 postings. Treat. Yo. Self.

These Are My Confessions…..

I haven’t wore jeans since high school. This choice became especially unique after moving to Oregon where a suit is on the verge of extinction. My jeans phobia is probably related to the embarrassment of wearing husky fit jeans. Anyway, it took decades but my phobia has turned into a trend according to the NY Times – Jeans? Some Boys Shout, ‘No Way!’

I’ve returned from a trip to DC for the NLC Conference. The experience confirmed my skepticism about professional conferences and their value. Any value could be had by hanging around the hotel bar which is seemingly packed 24/7. Hat tip to Todd Cutts (City of SeaTac) and Ryan Mannion (Socrata) for picking up my drink tab.

While they didn’t pay for my drinks, it was just as enjoyable meeting Michael O’Brien (MOB Advocacy), Jon Stehle, (MITRE and City of Fairfax Parks Board), Christina Kuo (U.S. Green Building Council), and Dan Weinheimer (City of Fort Collins, CO). I think you’ll be pleased by the results of these meetings which will be evident in coming months. Conference aside, DC is an incredible place. The Newseum is a must and Arlington National Cemetery is a humbling but necessary experience. Although I would ban the tour bus that frequent the cemetery.

I flew to and from DC on Alaskan Airlines. I usually fly on United which had contributed to my sinking feeling about the airlines. Alaskan Airlines gave me hope by offering internet access and free movies, and not movies that were released in 1978, but new releases. Birdman was my selection on the way to DC and Skeleton Twins entertained me back to PDX. Both were solid movies. My favorite scene from either movie was this one from Skeleton Twins.

What Did I Miss?

It was the perfect start to a day in seeing Kirsten featured in the ICMA spotlight. This coming on the heels of ELGL’s appearance in Governing. What’s ahead….ELGL was interviewed by the Tigard Times and ELGL is meeting with City of Dallas, TX management next week to discuss a Dallas-centric chapter. Change is happening.

“I Celebrate the Man’s Entire Collection”

One of my top five favorite movies Office Space has extended its life a little bit, and Michael Bolton is to thank.

Office Space with Michael Bolton from Funny Or Die

Another small step for raising awareness about the lack of diversity in local government. Mark Funkhouser, Governing Publisher, included the importance of the #13Percent initiative in this month’s issue of Governing. Here’s a sneak preview. Huge thanks to those who have contributed articles to the initiative. Ben McCready added his thoughts in an article published today. Stay tuned for more details on ELGL’s relationship with Governing.

The disturbing case of the bloggers who fake death and disease for attention
A Brewing Problem
EA shuts down Maxis Emeryville, studio behind SimCity (update)
Vince Vaughn and Co-stars Pose for Idiotic Stock Photos You Can Have for Free
Suspect In Custody After Responding To His Own “Wanted” Ad On Facebook

“The Price Is Wrong, Bob”

Hittin’ in the Mitten

There is an ELGL movement brewing in Michigan. Bridget Doyle, City of Sterling Heights, MI, kickstarted the effort following our appearance at a CPBB event in Lansing, MI. Here’s how you can get involved. Even if you don’t live in Michigan, tell your colleagues who do. At the same time, our California effort continues to grow. We are partnering with IAP2 on a future event and are developing more content from the state. Julie Underwood, Daly City Assistant City Manager, has been amazing in “gathering the troops” for the CA chapter.

New report shows urban ‘donut’ shifting John Oliver Explains How America’s Neglected Infrastructure Is Like A Lego Set How widespread is gov use of personal email? How Google could make billions from balloons How Apple lost $533 million to an 8th-grade dropout patent troll

Our members-only Facebook group has spiraled to 250 people. Join the conversation as we’re naming the song(s) that get us in the zone for a council or staff meeting. This Is How We Do It, Respect, Girl on Fire, and Lord,  and I Hope the Day Is Good are among those mentioned so far. Link: ELGL Facebook Group – Members Only

Government has an image problem. The reasons are countless as to why. A recent CBS investigation, “Red tape keeps some bad gov’t workers from being fired” takes a big highlighter and points out the extreme examples of abuse within government. Here’s a snippet.
In the private sector, if you’re caught viewing porn on company time or intimidating a co-worker, you’d probably be fired immediately; not so if you’re a federal employee.
These kind of stories will always exist. On the local level, we can combat the negative stories by dropping our boring, dis-engaging government language and begin to communicate like a human. I’ll leave you with a recent example of a communication win for local government.

This past Saturday I had the chance to sit down for coffee with Steve Harding. Steve is a professor at Northwestern, retired city manager, and active in NASPAA. Steve is a new ELGL member and is quickly catching on to the ELGL culture. He described ELGL as the “counter culture” within local government. Bill Walton must be smiling. You’ll hear more from Steve when he engages ELGL about the current state of public administration programs. He’s also lending a hand to our California effort as he resides in San Diego.

Where Were We?
If you’re just joining us, you can get up to speed by reading the last Confidential which started in 2014 and ended in 2015. You might take a minute to admire the horrible formatting in that post.

First of the Month

I refuse to let the first day of any month pass without bringing back this classic. It should go without saying but this is not appropriate for the workplace.

Afghan Policewomen Fight Against Culture
When Your Punctuation Says It All (!)
Are postcards obsolete?
7 Cities That Are Starting To Go Car-Free
Where Journalism Goes to Die

Michael O’Brien, ELGL member and MOB Advocacy founder, has blogged about his reading recommendations from February. One of the recommendations might be familiar to you.
“This series was born from ELGL’s Webinar: Women in Local Government, which examined how and why the percentage of women in leadership positions in local government has held at 13% since 1984. ELGL surveyed those who registered, and published the responses to four questions.   I’m highlighting this because the 13% issue deserves more attention and discussion, and ELGL is becoming THE leader on this issue.  It’s just one of the reasons I’m proud to be affiliated with such a great organization.   Please check out ELGL for more information on how you can join and get involved in helping local government break that 13% ceiling.”

Vine of the Day