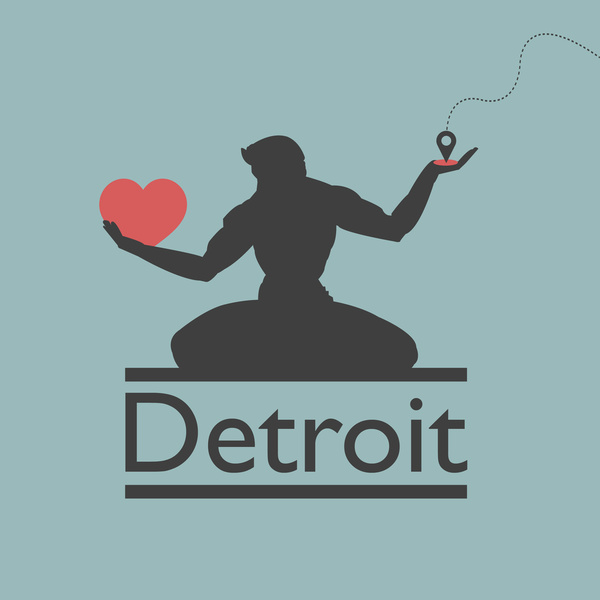 Sure, Detroit and its history is no stranger to scrutiny from the media, public and tourists. But Michigan ELGL wants you to look past the easy condemnation of this great city and proliferation of “ruin porn.” There is a vibrant, active, caring community working to rebuild and bring Detroit back to life. We believe, that as local government professionals, we should be championing those working to make cities better.
The mini-series features three columns: “The Ex-Pat” by John McCarter (Pearland, TX and formerly Novi, MI), “The Transplant” by Bridget Doyle (Sterling Heights, MI) and “The Lifer” by Amanda Thomas (Sterling Heights, MI). We welcome additional input from Michigan ELGL and others.
————————————-

We Give a Damn about Detroit: The Transplant

As a born-and-raised Chicagoan, it’s not in my blood to defend another city. We Chicagoans are a proud breed (and rightly so) — and Chicago will always be my heart and hometown. However, after moving to the Detroit metro area about five months ago, I never expected myself to feel so passionate about a city whose sports teams rival my own. There is a burning loyalty for this city that is hard to explain unless you talk to people who live here. The underdog mentality is alive and well— but it’s a point of pride for those who feel it. All around the city and surrounding suburbs, people don clothing defending Detroit. “Detroit Hustles Harder” and “America’s Comeback City” are local favorites. Bumper stickers with the Old English “D” are, I kid you not, displayed on the back of every fourth car I see on the highway. Despite the criticism from the country and the constant jokes in popular culture, Southeastern Michiganders are proud of their city. That in and of itself is admirable to me.
As local government professionals,  I truly believe it is our job — rather, our civic duty — to help solve the problems of cities like Detroit. We must showcase the people who are giving their time and energy to make struggling cities a better place and encourage community investment. Detroit’s challenges are great, but it is not the only US city with public struggles. The same way Atlanta has to find its way out of urban sprawl and horrendous traffic; the same way the St. Louis area and Baltimore (and frankly many American cities) have to find a solution to address police-citizen relationships and racism; the same way Chicago has to preserve the lives of the peaceful people living on the south side and shield them from gang violence. We chose public service as a career to make cities a better place, thus, we must help create the solution.
Detroit is not dying. The glittering midcentury Detroit has been dead for some time. But the reinvestment in Detroit in this decade is fast-moving and worth noting. “With a planned international bridge, streetcar line, 44-block arena and entertainment district, revamped riverfront and lots of housing, greater downtown Detroit seems finally at a long-predicted watershed moment. Big projects breaking ground, plus a palpable optimism among the most powerful and wealthiest people in the city and state, could push Detroit into a recovery that transforms it dramatically in 10 or 20 years,” wrote the Detroit Free Press in 2014.

There are many initiatives worth highlighting — but one of my favorites is nonprofit TechTown Detroit. “TechTown is Detroit’s business innovation hub. As the city’s most established business accelerator and incubator, we provide a powerful connection to a broad network of resources, catalyzing entire communities of entrepreneurs best poised to energize the local economy. As Detroit reinvents itself, so TechTown works to reinvent Detroit.” According to its website, TechTown has served 1,026 companies, which raised over $107.26 million in start-up capital between 2007 and 2014 and contributed 1,190 jobs to the local economy. “Beyond education and encouragement, the numbers speak to a clear-eyed commitment to execute.”
Many Michigan millennials seeking urban environments are moving back to renovated lofts and gutted historic buildings in the city’s downtown. Ground has been broken on a new Detroit Red Wings stadium to be nestled among “$200 million, or more, worth of restaurants, bars, retail and housing to the west and south of the arena, creating new mixed-use neighborhoods in the current area around the Fox Theatre and [Detroit Tiger’s] Comerica Park” wrote Crains. Amidst the growth in what’s been coined as Detroit’s urban pioneer movement (craft cocktails, independent coffee shops, food trucks), a Polictico reporter pondered if there is room for black people in the new, growing and changing Detroit. Even the reinvestment, which should be getting our attention, can create issues worth exploring.

When I moved here, I did what every other privileged suburban jerk 20-something would do: I drove directly to the heart of Detroit’s blight to stare at it. I wanted to see the things I clicked through on the New York Times website in person. I wanted to gape at the despair. But that’s not the kind of focus Detroit needs from us right now. This is not to minimize the real poverty and violence struggles that exist. If the media does their job (and I know they will), they will do their best to cover the stories of the people. The struggles of many Detroit residents are real and prevalent. But as local government professionals, we should talk about the City of Detroit’s problems and solutions in a forward-thinking, creative and upward way. Detroit needs help, but continuing to showcase the existing problems as an expose of “what not to do” is not the solution. Let’s encourage conversation and progress. Let’s be the solution. That, to me, is ELGL.