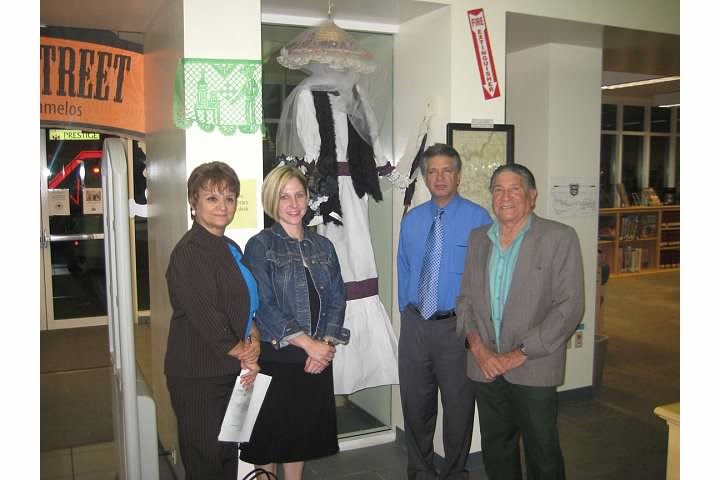 2008: Gringo in An Arizona Border Town

Guess which one is me.

Man, 2008 was a rough time in my life. I had just completed my first year in city government as the library director for a small town in Arizona (Douglas, AZ) on the Mexican border. I’d never worked for a city, and found myself a department head at 25 (I never told my staff how old I was(n’t).  I hated some aspects of my job desperately, but I got so much out of those four years I wouldn’t trade them for anything. It turned into an incredible experience that taught me everything from how to adapt to a community where I was a minority, the power of local government, and how to calculate the cost of a hamburger from the ketchup to the bun.

Although they were very nice about it, I learned quickly that the Mexican community didn’t respond well to hard-charging blunt East Coasters. I thought I was being effective. They thought I was rude. I got so much more done after I learned to just say good morning and ask how their child was doing in volleyball, and whether their mother’s doctor appointment went well. And then ask for a purchase order.

Living in a poor community, I also learned the power of some of the services cities provide, particularly library services. One year, Walmart decided all employees had to access the Walmart website and print their W-2s on their own. A significant number of the Walmart staff had no idea how to use a computer, and didn’t know anyone who did (more than 50% of the population had less than a high school education with corresponding poverty levels). My staff freaked when multiple people who had never touched a computer appeared at the desk ready to hand their Social Security numbers over. But we helped them after quickly realizing there wasn’t anywhere else they could go.

I left this community a year before the next presidential election for my current position in Sierra Vista, AZ. The phrase ‘trial by fire’ unfortunately hit very close to home when six days into my new job, a wildfire started on the outskirts of town, and went on to burn 59 homes. After ten straight 10-12 hour days in the Emergency Operations Center (my friends tell me this had nothing on EOCs they had to stand up for hurricanes multiple times a year. I salute you, those who have to deal with natural disasters regularly), I got to know my new colleagues pretty well.

But what sticks most in my mind was seeing our community respond more graciously and generously than I could have ever imagined with food, clothing, gift cards, basic toiletries, volunteer time, and even services the local stores set up at the shelters like telephones, computers, and televisions. I still tear up thinking about it. Community is a powerful thing.

It took some time, but over the next four years, I feel like I really learned what it means to work in local government, and to work FOR a community. Before, it was a job I performed that happened to involve serving members of the public. When I was hired in Sierra Vista, I was fortunate to have an excellent mentor in my supervisor, and was lucky to meet some friends, who are truly dedicated to service and the ideals of local government (LOOKING AT YOU, PAM). These people had a tremendous impact on my mindset of why we do what we do.

One thing that really strikes me in looking back over the past 8 years is that I would have thought that the things I’d be most proud of would be the big things – awesome new buildings built, or the creative new programs my department started. But some of the things I am most proud of are things that at the time didn’t seem like that big of a deal at all. I moved a farmer’s market into our largest park three years ago when they decided to switch to Thursdays. The move was relatively quiet, and I didn’t think much of it except that it had been a good move for the community. One day the market manager told me that the increased visibility and traffic to the market meant that many of her vendors now made enough money to make it a real job, and not just a hobby. Some of them had lost jobs, and were now on a path to operating a successful small business. That was a major light bulb moment for me on the true impact our jobs have on a community.

As I look to the next eight years, all I can see are possibilities, both for me and for local government. My department is doing some amazing things that I’m really proud to be a part of, and I look forward to guiding where it goes. There will also be some opportunities to potentially move up in the organization, and I look forward to thinking about that. I think fundamentally it’s an exciting time to work in local government. Everyone could use more money, but I think lean times often prompt more creativity and innovative solutions. What we do makes a difference in people’s lives every day, and I can’t imagine doing anything else.

Who Are You? with Victoria Yarbrough, City of Sierra Vista, AZ

My Life in Presidential Terms with Kristin Donald, Apex Park and Rec

My Life in Presidential Terms with Dylan Feik, City of Calistoga, CA

My Life in Presidential Terms with Katie Babits, City of Eugene, OR