What I’m Watching: Younger – very late to this party but I LOVE Sutton Foster, so am fully in support of this maybe too on the nose critique of millennial culture vs. the world.

What I’m Reading: The Girl with the Louding Voice by Abi Dare – a really moving peek into life in modern day Nigeria and a celebration of what you can achieve when you have friends and family who believe in you.

What I’m Listening To: The Queen and Slim soundtrack – Lauryn Hill created a new song for this album and it is SO GOOD. She is my forever queen.

As someone who feels strongly about my clothes and how I dress, what I’m wearing is never far from my mind, whether it’s because I’m excited about it or it has the potential to impact an outcome (job interview, being taken seriously, etc.). Women are often judged more harshly on their outward appearance than men, making it even more present. When I entered local government, this consideration took on a whole new meaning. You’re supposed to:

This is…a lot to consider. Especially with the understanding that professional expectations in Kansas (comfortable, Midwestern functionality) were different than those in Southern California (laid back, professional with a twist) which are even more different than Northern California (fancy af with names all over). And anyone who follows me on IG (all stories, all the time) knows I live for a good thrift store haul, meaning name brands are typically outside my reach and always “gently” used.

At a professional conference a few years ago, I brought my new “Prada” purse that my sister-in-law purchased for me on a trip to the Philippines. As mentioned, I’m not a designer person, but a beautiful purse is a beautiful purse, regardless of whether it’s PradA or PradO. I was sitting at a session with my purse on the floor next to me, and a woman literally gasped when she noticed and moved over so that there was an extra seat for my “designer” purse. We had a funny exchange where I explained my purse’s lack of pedigree, and she shared her own love of designer bags. She also advised me to be careful carrying my faux-designer purse at work and that sometimes she leaves her fancy purses at home to avoid the perception of being fiscally irresponsible as a public servant.

Recently, Congressional rockstar Alexandria Ocasio-Cortez faced similar criticism and was in the news for wearing an expensive designer dress during a television talk show appearance. Commenters felt as if they were owed an explanation about her potentially exorbitant expenditure, as if somehow it was their money she was spending.

Public servants, elected or otherwise, experience the ever-present weight of public perception, particularly if they identify as women. We in local government are often held to a higher, more rigorous standard because we are stewards of public funds, aka “my taxes pay your salary!” Thus, conversations policing the private financial decisions of public servants are fairly common. We have even learned to adjust to them, like my colleague with the penchant for purses who chooses to leave them at home. Does providing certain resources make you entitled to know things like intimate financial information or what their decision-making process is?

The idea that my job working for a local government means that I’m only allowed to spend money on things that are appropriate makes me crazy, especially when that distinction is heavily gendered against typically female expenditures (which is an entirely separate article, tbh). Additionally, it’s a tactic to discredit public servants and distract from the actual challenges of local government work. It only applies to specific purchases, as few people question the type of watch a man wears or how much that custom suit cost. And leisure activities are often hidden and thus safe from question, so the number of skiing trips or hockey teams you play for doesn’t get brought up too much (guys, winter sports are hella expensive – I’ll stick to swimming and frisbee).

There’s no easy fix to this because most of this weighty perception is outside our influence and deeply rooted in gender politics, economic divides and ultimately, a capitalist system that uses shame and envy to move us forward. But think about it the next time you hear someone being called out for a personal expenditure and ask why it’s okay for us to ask that question of them. Do they really owe us that information? Bring those assumptions into the light along with those designer handbags, so we can better understand and create a new, more fashionable way forward, preferably with this Kreayshawn anthem pumping us up. 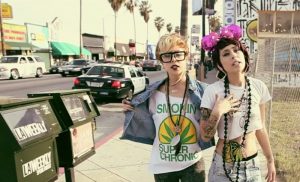 Today’s Morning Buzz was brought to you by Kendra Davis, Acting Senior Management Analyst with City of Santa Clara. Follow her on Twitter or LinkedIn and share as many hot fashion takes as you want because she is here for all of them with no judgement.