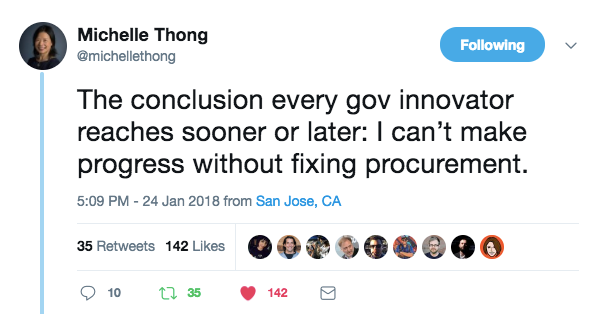 Mariel Reed is founder and CEO of CoProcure, a startup that helps local governments improve procurement to promote economic development. Mariel was previously an Innovation Strategist with the San Francisco Mayor’s Office of Civic Innovation. Want to nerd out about procurement innovation or public-private partnerships? Reach out on Twitter or via email.

If you’re like me (and many of my #mword peers), you want to do work that matters. Maybe your commitment to social impact has led you to a career in government, or at least a tour of duty. Or maybe you’ve worked in the tech industry for a few years, and now you’d like to apply your skills to solving serious problems facing our country. (And maybe you were even interested in doing so before the 2016 election).
I’ve been on both sides. In the San Francisco Mayor’s Office of Civic Innovation, I worked on programs aimed at making our government more collaborative, inventive and responsive. Now, as a government technology entrepreneur, I’ve joined a growing ecosystem of startups building products that make government work better.
From these experiences, I’ve learned:

In case you haven’t seen it, She’s All That is a late 90’s teen romantic comedy starring Freddie Prinze Jr, Rachael Leigh Cook, and (the late) Paul Walker. In the film, a popular high school boy agrees to a seemingly impossible challenge: he must transform the school’s nerdy female outcast into the next prom queen. Spoiler alert: he does, and romance happens along the way.*


Procurement is the public sector equivalent of Rachael Leigh Cook’s nerdy character. In a time of smart cities, autonomous vehicles on our streets, algorithmic public policy, and government deployment of blockchain, government procurement doesn’t exactly stand out as the sexiest topic. Procurement is a seemingly boring, nerdy topic. It’s too much about “following the rules.” It’s too back-office, too administrative, too wonky.
Spoiler alert: procurement is all that.
Why? Procurement affects everything we do, or aspire to do, to make government better.
Procurement is how governments buy products and services from businesses. It’s the rules and regulations guiding this process; it’s also the process that’s been built around these rules through decades of inertia (and not necessarily legally required).
And it’s not working for government staff, businesses, or taxpayers.
Especially when it comes to procurement of technology, the status quo procurement processes continue to produce epic failures. It’s not just Healthcare.gov. Across all levels of government, we’ve accepted over-paying for technology that is over-deadline, over-budget, hard to use, or simply doesn’t work.
As Jen Palka, founder of Code for America, writes: “It shouldn’t cost $2B to share documents between sites of the California court system (and to subsequently scrap the attempt), or take 19 years to do the same for Massachusetts (still not shipped), or cost $11B to manage medical records at the Department of Defense and the Veterans Administration.” There are many, many other examples. Rhode Island recently committed to a $492M trouble-plagued eligibility-verification system for public-assistance programs for the poor (food stamps to cash assistance and Medicaid). The Los Angeles Department of Water and Power spent more than 3 years replacing a 40-year old system, but the new system – which cost more than $181M to implement – failed to collect over $245M in consumer payments due to botched rollout.

Sometimes, the most innovative thing isn’t adding new programs or projects; it’s removing the biggest obstacles to progress. Procurement is that obstacle. It’s government’s sexiest problem – and it’s just been sitting here in glasses and a sweater the whole time.

*To be clear: I’m not defending She’s All That. I don’t even really like the movie. It’s 100% not okay to place bets on women or to value women for their physical characteristics alone. I just think sometimes starting with a 90’s reference can make talking about tough regulatory and policy issues a little more palatable.

Are you a government intrapreneur interested in improving public procurement? A technologist looking to do work that matters? CoProcure is partnering with select governments to develop tools that improve the efficiency and affordability of procurement for government staff and vendors. We’d love to connect with you. Say hello: [email protected].
**If you’re new to the procurement world, you can dig into some great calls for procurement reform here, here, and here.