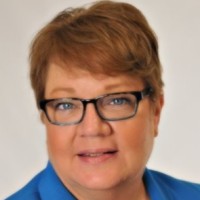 In a state that’s well known for professional local government, the North Carolina Local Government Commission is as responsible as any other agency for helping make the state that way. The LGC is a well-known state agency that keeps NC municipalities from getting into trouble with their finances. I think it was the first agency of its kind and it’s a model for other agencies across the nation.

Ms. Edmundson is the Secretary of the LGC, and oversees the Local Government Finance division of the NC State Treasurer’s Department. As that agency’s representative to the state’s local governments, she’s an important figure just by virtue of her office.

But it’s her abilities that make he deserving of this recognition. She’s got a knack for translating complex concepts into layman’s terms. She uses that talent to help folks understand and execute the nuances of the legislation that governs local government finance in North Carolina. She’s prompt and responsive, no small feat for an agency with over 1,300 constituents. And she’s as patient with small units of government working on the basics as she is with the big cities with teams full of CPAs.

I think she’s the third most important person in state government for NC municipalities behind the governor and the NCGA’s speaker of the house.