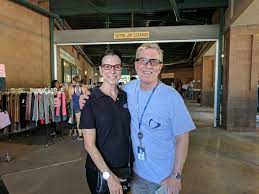 Greg has reformed how Scottsdale, Arizona interacts with our homeless population. Prior to his tenure, Scottsdale did not have a focused or robust program for our unhoused. Generally, they were given a card with numbers of social services agencies to call or perhaps some limited help from our community centers.

Greg has championed the Brick by Brick program which is now providing materials to some Scottsdale Capital Improvement Projects, he’s reformed outreach, temporary housing options and more. Most importantly, he has noticeably changed the tenor of the conversation around homelessness inside and outside of city hall. He has been impactful by leading with this infectious empathy that truly has spread across the organization and into the community. He works very hard for the community and for his staff in Human Services, and he leads with his heart at all times. He is inspiring. His warmth and generosity of spirit have touched so many of us and made us want to be better public servants.

Fun fact: Greg originally went to seminary with intentions of becoming a priest. He changed his mind and became a social worker, and Scottsdale is much better for it.