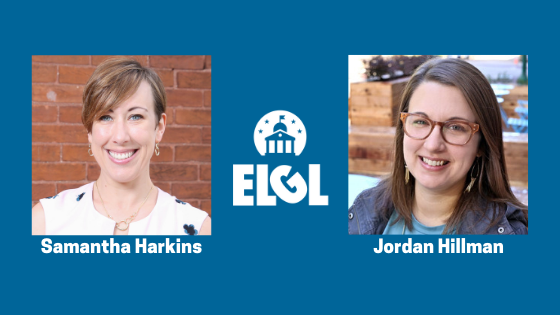 The ELGL Board of Directors has appointed two new members for two-year terms through July 31, 2021. Samantha Harkins and Jordan Hillman were formally appointed last week after a competitive recruitment process.

“We are so lucky to be adding two strong leaders to ELGL,” said Ben Kittelson, Chair of the Board of Directors. “Samantha and Jordan will help ELGL grow and improve at a pivotal time for the organization. They both stood out as candidates with their passion for ELGL and contributions writing for the website and appearing on GovLove.”

Harkins is the Deputy Mayor of Lansing, Michigan and has served as Chief of Staff for Mayor Andy Schor. She also worked for the Michigan Municipal League for more than 8 years.

“I love communities, and I’m thrilled to be selected for the ELGL Board,” Harkins said about her appointment. “ELGL is an authentic organization that represents everyone in local government, and it’s an honor to be able to play a role in the incredible work of this organization.”

In addition to her work for the City of Lansing, Harkins was selected for the 2018 Chris Traeger List for top influencers in local government. She also wrote about balancing a career as a parent and explained what a Chief of Staff actually does on GovLove.

The appointments were made to broaden the backgrounds and experiences of the ELGL Board of Directors.

“It will be refreshing to have someone like Samantha on the Board of Directors, she works in a strong mayor form of government and reflects how ELGL represents anyone in local government,” said Kent Wyatt, ELGL Co-Founder and Member of the Board of Directors. “Jordan’s perspective will also be invaluable, her background in planning adds a dimension that we were definitely lacking.”

“When I stumbled upon ELGL via the GovLove Podcast, I found my people,” Hillman said about joining the Board of Directors. “ELGL members are more willing to share their learned experience than any professional organization I have been a member of. As part of the leadership team, I look forward to helping others find ELGL and experience this amazing network of sharers.”

As a regular contributor to the ELGL Morning Buzz, Hillman has written a number of articles for ELGL, from her experience after the first 60 days in a new job to choosing incremental change over the silver bullet and dealing with the aftermath of a cyber attack.

The appointments reflect how ELGL members can grow and contribute to the organization.

“Samantha and Jordan embody what makes ELGL great,” said Joey Garcia, Member of the Board of Directors. “They were both looking for an organization where they felt they could belong, found ELGL and have given back to ELGL. They also reflect the diversity of career paths that ELGL members have.”

The ELGL Board of Directors is the official governing and advisory body for the organization. Board Members work on programming, events and content for ELGL. The Board is a working body that often fulfills roles that would be done by staff in a larger organization. This coming year, the Board will be implementing ELGL’s new strategic plan and ensuring the long-term sustainability of the organization.

“When I heard about their passion for ELGL and how much they value our close-knit organic relationships, I knew Jordan and Samantha would make perfect additions to the board,” Board of Directors Member, Christian Williams said about the appointments. “I look forward to their leadership as we continue to increase the value afforded to our members.”

Learn more about the ELGL Board of Directors and find contact information at elgl.org/board.

Samantha Harkins is the Deputy Mayor of Lansing, Michigan and joined Mayor Andy Schor’s administration in January of 2018. Her entire career has been in local government: as the Executive Assistant to the Mayor of Norfolk, Virginia; as a local government policy advisor for the Michigan House of Representatives; as lead lobbyist for the Michigan Municipal League and then President of the MML Foundation, and as VP of Government Relations at Munetrix (a municipal performance metric software company). She received her B.A. and J.D. from West Virginia University and bleeds old gold and blue. She lives in a renovated 1884 Victorian in Downtown Lansing with her husband, son, 100-pound Portuguese Water Dog/Poodle mix and two cats. She’s an avid runner, reader and writer. She loves food and cocktails (gin in the summer, bourbon in the winter and wine year round.)

Jordan Rae Hillman serves as Deputy Director of City Planning for the City of Jackson, Mississippi. She has over 10 years of experience in planning and design. Previously, she served as the Community Development Director at the City of Brandon, Mississippi. Her work has focused on innovation in local government, downtown development, urban design, code writing, development entitlement reform, collaborative planning, and capacity building. She has been an American Institute of Certified Planners (AICP) member since 2013 and is a Mississippi licensed landscape architect. She earned her bachelor’s degree in Landscape Architecture from Mississippi State University, and master’s degree in City and Regional Planning from the University of Memphis.