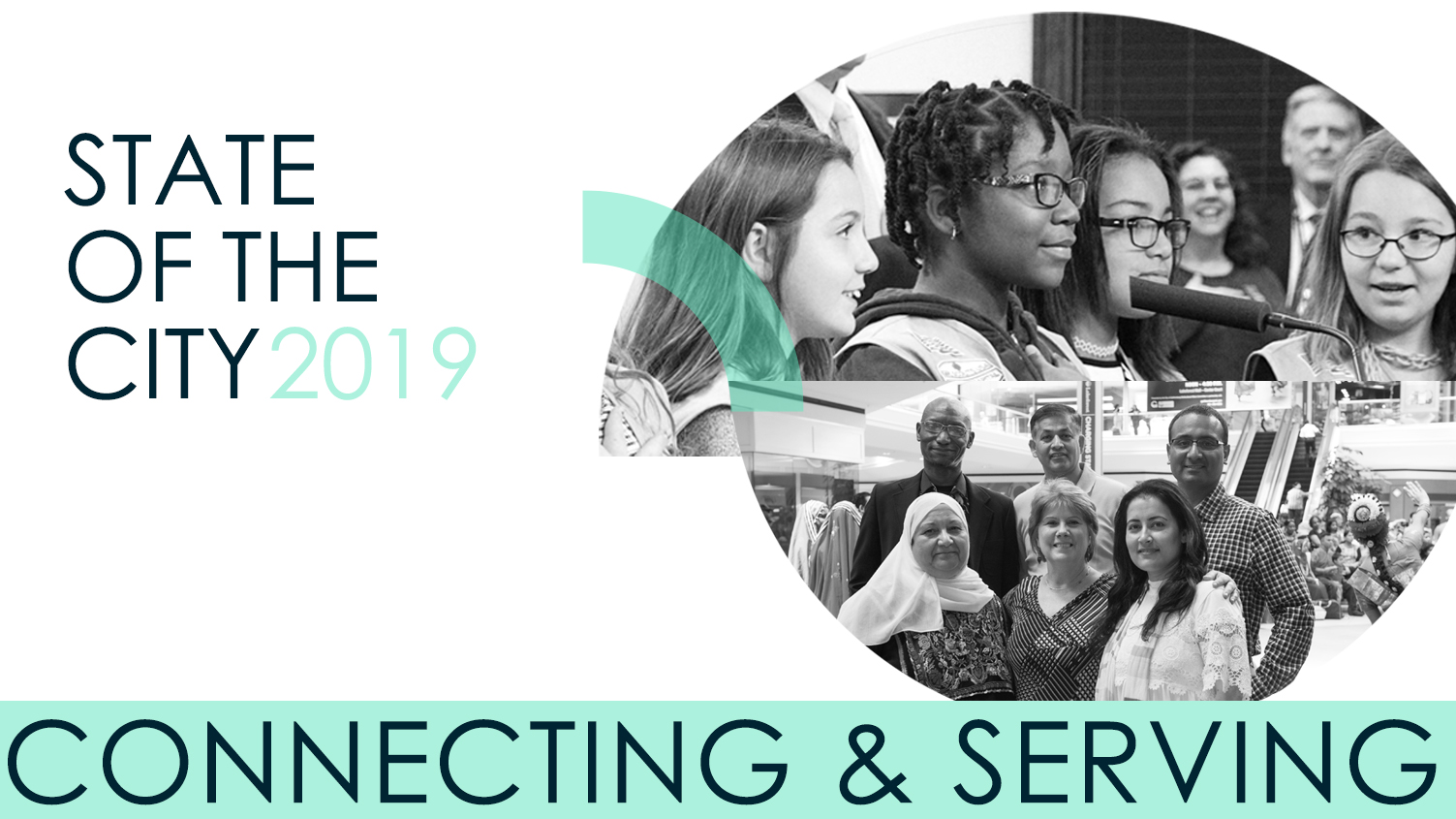 Our State of the City event is tonight! Just peep that opening slide up there (composed by fellow ELGL’er Amy McGuire).

Every year, just like most of y’all, we take on the … unexciting task of compiling all the things that happened in the area over the past 365, and making everyone dress up to listen to it.

These events are notoriously boring and stuffy — I mean the simple act of just making it relevant won Tigard, Oregon a Clarity Award at #ELGL18. And we have a BONUS difficulty level: our City’s event takes place in a gated live-in retirement community!

Luckily for us, our Mayor and Council are very easy-going and personable, so they, and the event by extension, are a natural fit for our social media efforts.

So, according to an NLC report from last year, buildings (significantly covered in 58% of surveyed SOTC speeches), streets (56%), homes (39%) and traffic lights (36% as a facet of public safety) were four of the five most-covered subjects covered last year.

My question is … Why? Has nobody in government ever worked in sales?

This isn’t a City Council meeting where we set the table. This is supposed to be about the greater effects of those mundane actions. (Of course, no speech can cover up a lack of substance, so if that’s your problem … I don’t think this is the right morning buzz for you.)

So, no, we’re not just content to trot the Mayor out on stage to drone on and on about roads and housing and … blah, blah, blah — in fact, this is the opening line of his remarks for tonight:

When you think of a city, what comes to mind? Buildings? Streets? Homes? Traffic lights? Sure, but those things alone don’t make a city. It’s the things that connect us that make a city. It’s our relationships with our neighbors. It’s the sense of a shared history and values. It’s the common cultural experiences.

… and (for the purposes of this article at least) that’s where social media comes in — connecting. We started livetweeting the event about 4 years ago, and every year, we’ve expanded just a little bit to include more and more knowledge and effort, and thus more and more residents — and it works! Aside from our 4th of July celebration, and our nationally-recognized annual Book Festival, this … “thing,” which by all accounts should be terribly uninteresting, is usually our third busiest day on social media.

“Every time I’ve seen those words, “We are Gaithersburg,” it has made me smile, because it reminds me that each & every one of us is part of the fabric of this community, with an important chapter to write in our collective story. And that story will be legendary!” pic.twitter.com/XwgdRhuVH1

For reference, a pretty busy month for us on Twitter involves about 200 tweets and around 140,000 impressions, with an engagement rate of around 1%. (#SmallCityLife)

Last year, during our SOTC event, in three hours, we pushed out 63 tweets to the tune of 40,000 impressions and our engagement rate nearly tripled. That’s over a thousand people going to our website for information on programs, finding hope in our successes, and bragging on their City in our own words.

Obviously, this takes the work of minds and hands, before and during the event. But my point is that it’s a great investment, and the theme of connection is one that we’re leaning into this year:

For the first time ever, we’re going to be livestreaming the event on Facebook (which we obviously encourage you to watch) as well as our YouTube channel, and since we’re streaming from the auditorium’s AV system, this has freed up hands and equipment for, again, more livetweeting, but also an opportunity to pull out the highlights (which, unlike other events, we already know exactly when and where they’re going to happen) for Instagram Stories.

Speaking to the Facebook Live aspect of it, we expect very good numbers on this. Long-form Facebook Live videos are very healthily rewarded by their algorithms, and allowing people to see an event that traditionally only VIPs are invited to, potentially while sitting on their couch in their underpants, has transcendental implications on connection. Utilizing Instagram Stories during the event does, as well — how many 20-somethings are going to see near-live updates of our Mayor sandwiched between updates from their friends?