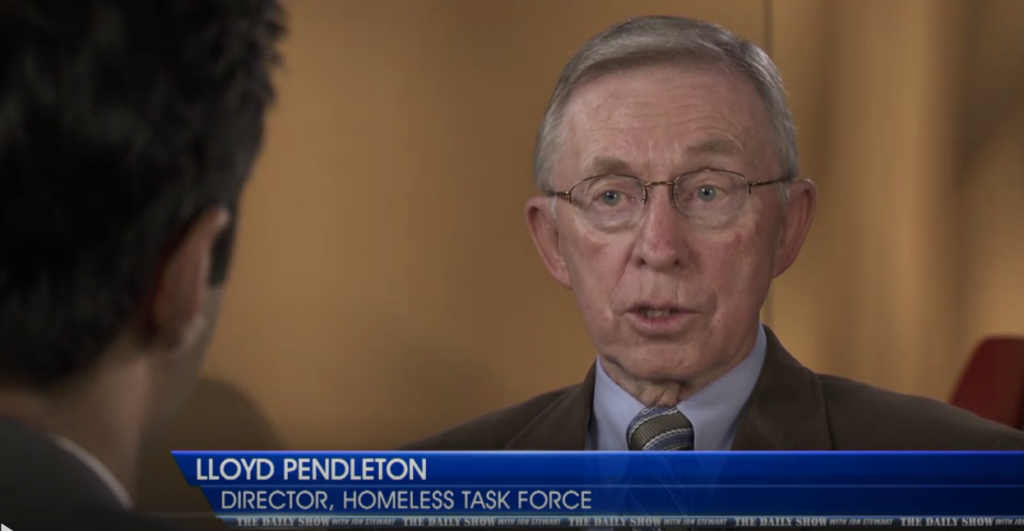 This is the fifth post in a new blog series about homelessness (and the second in a three-part series about how to solve chronic homelessness) from San Rafael’s Director of Homeless Planning & Outreach, Andrew Hening. In each post, Andrew will discuss the root causes, overarching strategies and tactics for addressing homelessness in your community. Learn more about what San Rafael is doing to end homelessness.

Over the past year the County of Marin, local service providers, and the City of San Rafael have begun adopting a dramatically new strategy for ending chronic homelessness.  This new approach is called “Coordinated Entry,” and it has been pioneered, vetted, and proven successful in communities around the country.

This is Part 2 of a three-part series that will breakdown the strategy we’re now pursing to end chronic homelessness in San Rafael and Marin. Read Part 1.

Trying to Solve Everything Except the Real Problem

People become homeless for a wide variety of reasons, yet every person experiencing homelessness has one thing in common: THEY LACK HOUSING

Despite this somewhat obvious fact, providing housing is sometimes the last issue our system of care addresses.  Instead, people experiencing homelessness often hear, “We can provide housing for you, but …

This traditional approach is often called the “Treatment First” model.

(Another) Critical Insight from Emergency Rooms

Last week in “Step 1” we discussed how our system of care needs to function more like an emergency room, triaging people’s level of vulnerability.  Building on that analogy, imagine if someone having a heart attack went to the emergency room, and the doctor, instead of treating that person right away, said:

There would be riots if hospitals did this.   Doctors and nurses know that in an emergency setting, you must address the symptom before you address the cause(s).  After someone is recovering from having a heart attack, then you help them address the root causes – smoking, diet, exercise, lifestyle, etc.

Our status quo response to homelessness does the exact opposite – we seek to fix all of the causes before addressing the crisis.

The term “Housing First” has gained national attention in the past few years, particularly as a result of efforts in Salt Lake City, Utah.  Using a “Housing First” approach, Utah:

However, “Housing First” is much older than Utah’s efforts.  In 1992 Dr. Sam Tsemberis, a faculty member of the Department of Psychiatry of the New York University School of Medicine, founded Pathways to Housing in New York City. Dr. Tsemberis saw the broken logic of treating housing last, so he decided to experiment with trying housing first (check out Sam’s TED Talk).

The terminology can sometimes get confusing, but “Housing First” is the process of getting people into Permanent Supportive Housing.

If you think this process sounds somewhere between counter-intuitive to completely crazy, you wouldn’t be alone.  Utah is one of the most conservative states in America, and Lloyd Pendelton, the Director of Utah’s Task Force on Homelessness, had previously been a senior official with the Mormon Church.  When he first heard about “Housing First,” Lloyd recalls saying, “You guys must be smoking something.  This is totally unrealistic.”

But then, as is now, the data supporting “Housing First” is substantial.  Consider the results from Dr. Tsembersis’s Pathways program.  By randomly dividing chronically homeless participants between “Treatment First” and “Housing First,” after two years: 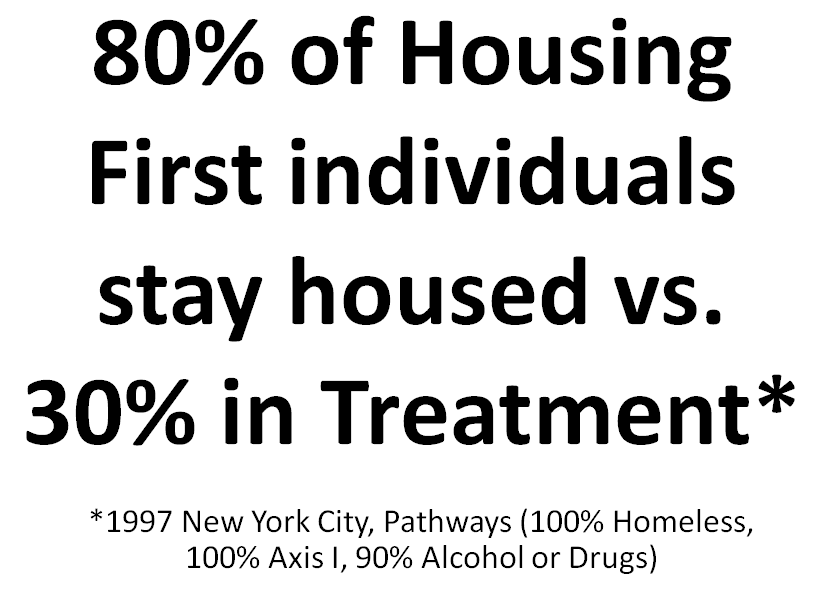 Closer to home, LiveMoves in San Mateo County operates a “Housing First” program called the Vendome.  After one year residents had a: 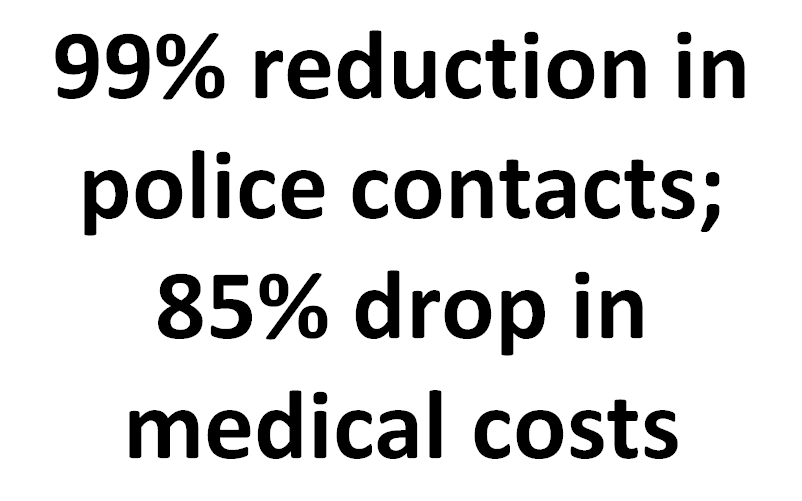 In addition to tremendous results, “Housing First” has something else going for it – the cost. Compared to the $60,000 a year it costs to keep a chronically homeless person on the street(healthcare and emergency room costs, mental health costs, and the court system), providing rental subsidies and supportive services through Housing First can cost half the price.  The person in-need wins, the community wins, and the taxpayer wins. 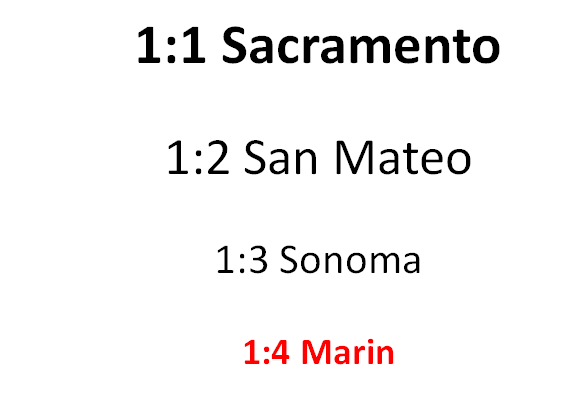 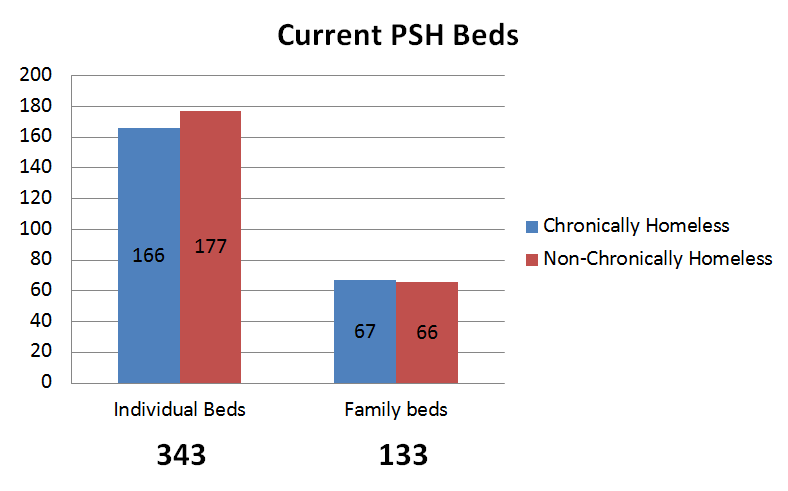 By moving to a “Coordinated Entry” system we can begin to correct this imbalance. “High needs” people can finally access intensive services, and “low needs” people can access equally effective but less intensive services.  If people can resolve their homelessness with 6-12 months of case management and temporary rental assistance, shouldn’t we direct people to that intervention versus long-term, multi-year supportive housing?  If I cut my finger and only need stitches, a hospital isn’t going to put me in an MRI machine.

You might be asking yourself, “Is it really that simple?”  As a strategy, yes, it really is that simple.  If you have any doubts, check out this amazing video from the Daily Show featuring Lloyd Pendleton and the efforts in Utah:

Yet even though the strategy might be simple, as Iain De Jong is fond of saying, “The directions for baking red velvet cupcakes are also simple, but that doesn’t mean it’s easy to do.”

Over the coming months we’ll look at some of those challenges:

But first and foremost, we have to address the real question you’re probably asking yourself – “If we provide all of this housing, aren’t more people just going to come to our community, preventing any meaningful progress?”  We’ll answer that question in Step 3.