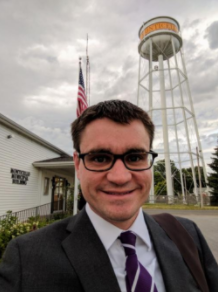 Dan Bolin warming up for #CityHallSelfie day in Monticello, Illinois!

This blog post is by Dan Bolin and Julie Tappendorf, with the Ancel Glink firm. It’s part of a new blog series titled ELGL Legal: It’s not legal without “ELGL.” Check out Ancel Glink’s Municipal Minute blog for more cases, laws, and other topics of interest to local governments.

ELGL members are no strangers to social media. (#CityHallSelfie day is August 15, 2017!) However, last week was the first time the U.S. Supreme Court confirmed that social media is “speech” under the First Amendment. (Packingham v. North Carolina). As a result, local government officials and employees should make sure their social media use and policies comply with First Amendment principles.

Lester Packingham celebrated the dismissal of a traffic ticket by posting on his personal Facebook profile:

“Man God is Good! How about I got so much favor they dismissed the ticket before court even started? No fine, no court cost, no nothing spent. . . . . .Praise be to GOD, WOW! Thanks JESUS!”

The trouble is that Packingham is a registered sex offender, and a North Carolina law makes it a felony for a registered sex offender “to access a commercial social networking Web site where the sex offender knows that the site permits minor children to become members or to create or maintain personal Web pages.” Packingham was convicted, and he appealed all the way to the U.S. Supreme Court, which ruled the law is unconstitutional under the First Amendment.

The Court first determined that the law applies to common social media sites such as Facebook and Twitter. The court noted that social media allows users to gain access to information and communicate with one another, and that the law bars access to what for many are the principal sources for knowing current events, checking ads for employment, speaking and listening in the modern public square, and otherwise exploring the vast realms of human thought and knowledge. In the Court’s opinion, foreclosing access to social media altogether prevents users (even convicted criminals) from engaging in a legitimate exercise of First Amendment rights.

Although the Court acknowledged that the government can enact specific, narrowly-tailored laws to prohibit sex offenders from engaging in certain social media activities (like contacting a minor or using a website to gain information about a minor), the Court found the North Carolina law too broad because it also prohibited protected First Amendment activities on social media that had nothing to do with keeping sex offenders away from vulnerable victims.

In sum, the Court stated as follows:

“[T]o foreclose access to social media altogether is to prevent the user from engaging in the legitimate exer­cise of First Amendment rights. It is unsettling to suggest that only a limited set of websites can be used even by persons who have completed their sentences. Even con­victed criminals—and in some instances especially con­victed criminals—might receive legitimate benefits from these means for access to the world of ideas, in particular if they seek to reform and to pursue lawful and rewarding lives.”

The Court concluded that as a general rule, the Government “may not suppress lawful speech as the means to suppress unlawful speech.” … Because that is what North Carolina’s law did, the Court held it was invalid.

The First Amendment Applies to Local Governments on Social Media

The Supreme Court observed Facebook has 1.79 billion active users, a number that probably includes many of your residents and employees.

The Government Can’t Just Delete Comments it Doesn’t Like

If you see a post you don’t like on your personal Facebook “wall,” you can just delete or hide it, or just block someone from posting at all. Moderating comments on local government social media sites is very different, however, because of the First Amendment.

The First Amendment provides individuals with the right to engage in protected speech without government interference. If a local government establishes a social media site to communicate with the public about agency business, the First Amendment will apply to the comments and posts made by others on that site.

So, the moderator of the agency page cannot simply delete, hide or block posts or people based solely on the content of the message that was posted.

That does not mean that “anything goes” on government social media sites. Governments can adopt rules on public comments so long as the rules do not implicate protected speech. For example, local governments might ban commercial advertising on its site, prohibit discriminatory comments, and ban all links to third party sites.

However, removing posts that are simply critical of the agency or its activities could be subject to challenge as a violation of the First Amendment. Many governments find it helpful to look at social media moderation along the same lines as moderation of comments at a public meeting – while it is acceptable for the public to criticize and disagree with agency actions, if the speech becomes disruptive, agencies will enforce “rules of decorum.”

Local governments should put their comment policies in writing and post them on their social media sites (or provide links to the policies on their website) to put the public on notice of the type of comments that will be subject to removal.

Public employees also have the right to exercise their First Amendment speech rights, to comment on working conditions, and to speak on matters of public concern.

As a general rule, however, social media posts that fall more into the category of an “individual gripe” about the employee’s job or supervisor will not be considered protected and could result in discipline and even termination.

By adopting a social media policy, including a comment policy and employee use policy, local governments can manage social media in accordance with the First Amendment, open records laws, open meetings laws, and copyright laws.

ELGL is encouraging members to share their local government social media policies, and reviewing sample policies is one place to start. However, with laws and social media platforms changing all the time, it is important for local governments to work with their attorneys and staff to implement and regularly update a policy that fits how its officials and employees use social media.

Courts are sure to have more to say about social media in the coming years, stay tuned!