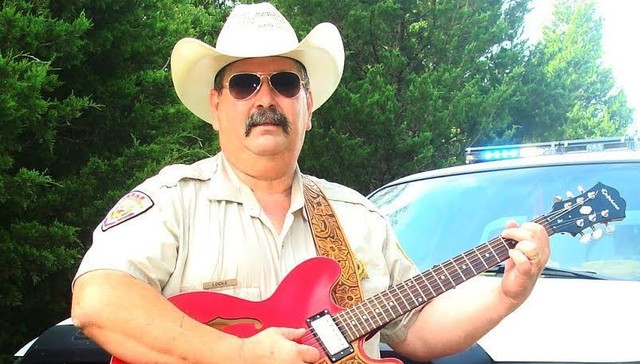 Sunnyvale’s ‘Critter Getter‘ Now Has His Own Song

The hottest song in local government is “The Critter Getter” listen to the track below! After hearing this song ELGL had to interview the man behind it. Frank Locke is an Animal Control Officer for the Town of Sunnyvale, TX a town of about 5,000 in the Dallas area. In our interview we covered everything from his musical influences to why Animal Control Officers need a pick-me-up like this video.

When did you start playing guitar?
I began playing the guitar in 1974 when I took a guitar class in school. I have never really “studied” playing guitar and always considered that my second instrument and my voice as my first instrument.  I have taken to studying music more in recent years. I also play Mandolin, and I am studying pedal steel guitar.
How did you know local government was the career for you?

Funny story… After I got married in 1982 my new wife and I were living with my parents since I was the last child at home. My being jobless became an issue to my father. One afternoon he came in and again asked me if I had a job yet. I had not. He said you will get a job tomorrow even if you have to be the @&%! dog catcher. He arranged an interview with the supervisor and the next day I had a job as the @&%! dog catcher. I have always enjoyed dealing with animals and I also enjoy helping solve problems, so it just seems to be a good fit for me.
What is the strangest or most interesting animal you’ve dealt with?
A 400+ lb Bengal Tiger. Back in 1991 when I worked at the Denton County Sheriff’s Department, I was called to a home in Copper Canyon where a tiger had let herself into a backyard. In this backyard the resident raised pot bellied pigs as pets. It wasn’t pretty. When myself and two deputies arrived we discovered that a catch pole doesn’t have a large enough loop for a tigers head. The animal control truck cages weren’t large enough either. Long story short. I was aware that there was a pet tiger about a mile up the street and hoped that she was enough of a pet to treat as one. I took my leash and led her to the truck. She jumped into the front seat and I took her home.
What was your reason for making the Critter Gitter video?
I was hosting a training class for Animal Control Officers and wanted to liven up the class time. I thought a little humor would do the trick, and to make it relative to those in the class would be a plus. Then they asked me to post it on Facebook so they could share it with others.
What kind of response have you had to the video?
I have gotten comments and friend requests from Ireland, Australia, and France, as well as every state in the country. I have been invited to perform it live at a few events. I figured it would get shared with a few friends and family. My expectations were 100-200 views maybe. I never dreamed that it would go around the world.
But the biggest response has been the way it has encouraged Animal Control Officers. Every day I get messages and comments that one officer or another loves it. I figure if it made them smile I have accomplished something.
Why is that important?
Most people don’t realize that the Animal Control field shares a grim statistic with police and firefighters as having the highest suicide rate in the world according to the American Journal of Preventive Medicine. We all deal with Compassion Fatigue as a result of investing ourselves into helping the animals and serving the public, then having to euthanize animals and seeing the endless number of animals that continue to pour into the shelters. It is often overwhelming, and most Animal Control Officers have no plan for how to deal with this part of their job.

How does this video help with that?
When an ACO see this they realize that they are not the only ones dealing with these issues. It encourages them to know that they are not alone, and we are all working together, dealing with the same issues. There are enough withdrawals from their emotional account, this makes a small deposit. That keeps them going a little bit.
Any other reasons to do the video?
During the interview when I was hired my supervisor and I agreed that we both wanted to get the most impact from the budget dollar. We agreed that to do that we have to minimize the number of animals coming into the shelter and maximize the number being adopted. To accomplish this community relations and humane education have got to be a priority. The administration has been supportive of each step along the way. We have developed a very nice display to take to events and we never miss an opportunity to interact with the public. This video is an extension of that concept.
How can other government leaders impact their staff like that?
I have been in public service since 1982. During that time I have had two supervisors that took the time to get to know me as a person and invest an interest in me. Two supervisors in over 30 years that sat down across a dinner table and didn’t talk about work but talked about family and what do you like to do when you’re not at work. I willingly went above and beyond for them. When your administration tells you through their actions or their words that you are expendable, you only invest yourself to do what is required.
Leaders might be surprised at the skills and talent they already have on staff if they just invested the time to get to know them. I make my biggest impact on our community by getting face to face with people and getting to know them. Why should it be any different for leaders.

As a follow up to his first hit single, Frank released this song called, “A Day in the Life.” Hopefully the album will drop in time for holiday shopping.