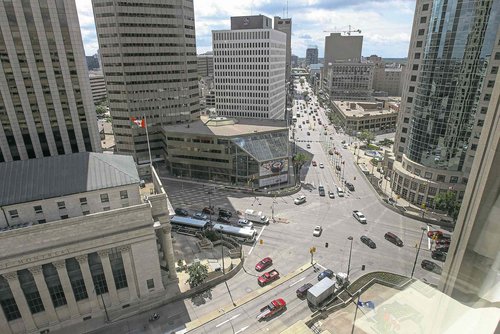 MIKE DEAL / WINNIPEG FREE PRESS files A roundabout at the iconic intersection of Portage and Main would work for vehicles and pedestrians.

ELGLers State of Place share a highlight from the International Downtown Association Conference.
HIGH DRAMA IN CANADA? THOUGHT THAT WAS ONLY A U.S. THING…


When we heard about the one-year plus controversy around the idea of once again allowing pedestrians to cross at Portage and Main (Canada’s most famous intersection, it seems!), it was a no-brainer that State of Place was just what proponents of elevating Downtown’s walkability needed to turn Nays into Yays and win support for this important project. In case you haven’t heard about the “brawl” that’s been brewing between Mayor Brian Bowman & Councilman Jeff Brotway, here’s what you need to know:

THERE’S GOTTA BE A BETTER WAY!
Are you keeping track? So that’s four years, at least $116K and counting (more if you count lost time) with no end in sight… all to decide whether or not to take down some pedestrian barriers? Really? Seriously? It’s 2017. This. Shouldn’t. Take. This. Long. To be fair, this Winnipeg War is all too common. There are countless plans for making places better that should just be no brainers. We all know what inherently good design is. We all know what is good for pedestrians. We all know what more and more people are looking for – walkable, livable places. And there are many amazing designers and planners (who I have affectionately referred to as “the Usual Suspects”) equipped to create awesome schemes to make these kinds of places come to life. And yet…four years and counting and nothing. And that’s not even the worst case scenario. Some plans don’t see the light of day for over a decade…hence all that “notorious” dust being collected. Why?
NAYSAYERS GONNA NAY!
The truth of the matter is, there are still stakeholders that don’t buy your vision. And they’re often equipped with “data” that proves their point. And you’re bringing (beautiful) pictures to fight your battle. It’s time to fight fire with fire. It’s time to bring your own gun to the gunfight, as one of our favorite customers, and big-time IDAer, Raphael Clemente of West Palm Beach Downtown Development Authority loves to say. It’s time to create your own “data-driven” story about the power of place. So without further ado, we’ve taken the liberty of doing just that. We analyzed the existing conditions of Portage and Main and the five blocks that intersect it and ran a scenario analysis to see what the impact would be of transforming this uber car-oriented street into a pedestrian wonderland – both in terms of quality of place and the economic bottom line. TLDR – the results are AMAZING!!
BUILD IT SO THEY CAN WALK – AND MAKE $$$ WHILE AT IT!
We’re not trying to toot our own horn (too much!), but the analysis below took a matter of hours to put together, and most of that was spent collecting data for the six blocks included in our report (and soon, we’ll automate that so it’ll be done in seconds). Compare that to four years and potentially two more years to go…Save time and money and maximize the bang for your buck (ahem, estimated at $18+ ROI) – who doesn’t want to do that?
Here’s what we did: