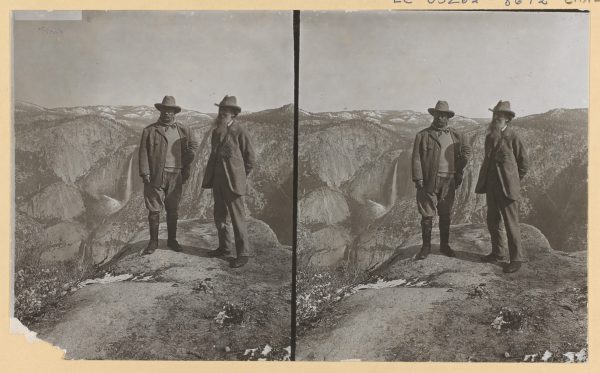 What I’m watching: The latest installment of “The Great British Baking Show” for the increasingly complicated treats and the Instagrammable setting.

What I’m reading: “Parks” — a chronicle of America’s Best Idea through 103 years’ worth of National Park Service brochures, maps, memorabilia and other ephemera.

You can find a simple credo on signs at all varieties of public lands, from neighborhood trails to the most-visited national parks: Take only pictures. Leave only footprints.

Today is National Public Lands Day, when state and national parks offer free admission and people from coast to coast participate in the largest single-day volunteer effort for public lands.

National Public Lands Day is also a time to take stock of how social media, particularly Instagram, is reshaping our relationship with the great outdoors.

Stories abound throughout the United States and Canada about how social media is leading to a deluge of new visitors to public lands — as well as more litter, more strain on already stretched infrastructure, and more people unfamiliar with basic outdoor skills, Leave No Trace principles and trail etiquette.

Never stop exploring. . ? by @vincentschnabl while doing some mellow hiking in Revelstoke. We love seeing your adventures around BC. Share your moments with us (and tag #exploreBC) so we can follow along. #exploreBC #exploreCanada #KootRocks #Revelstoke . Remember to respect the terrain, environment, and other users while you are enjoying the trails. Follow the three Ts—trip planning, training, and taking the essentials. Familiarize yourself with #LeaveNoTrace principles and @bcadvsmart is a great resource to help you get informed before heading outdoors.

The phenomenon started attracting attention and concern in the last decade, paralleling the rise of Instagram and influencer culture.

Apple added front-facing cameras to the iPhone 4 in 2010 — coincidentally the same year Instagram launched. In 2013, by the time Instagram had amassed more than 150 million monthly users, Oxford Dictionaries named selfie as the Word of the Year.

With smartphone cameras improving, attention spans shrinking and the pressure increasing to capture ❤️-worthy photos, public lands offer breathtaking backdrops to wannabe influencers and others doin’ it for the ‘gram.

The most-discussed example is Horseshoe Bend, on the Colorado River in Arizona, where officials recently added parking and railings after the destination became #Instafamous.

ATTENTION VISITORS: Follow the City of Page extended parking regulations for Horseshoe Bend this weekend. ??⚠️?? From cityofpage.org: In preparation for the Fourth of July holiday and weekend, the City of Page will be taking necessary precautions to deal with the expected traffic over the busy holiday. Visitors can expect to see barricades along the Hwy 89 corridor south and north of HSB in order to keep vehicles from dangerously stopping, standing or parking along the highway. As the Horseshoe Bend Parking Lot fills to capacity, the lot entrance will be closed and vehicles should head to the Shuttle Lot on the northside of Hwy 98 (1 mile north on Hwy 89, then ½ mile east on Hwy 98). The Shuttle Lot will be open on July 4, 5, 6, and 7th . The Shuttle Bus will run from 8:00am – 7:00pm, with the last pickup from Horseshoe Bend being at 8:00pm. Please note that on these days, all RV’s and over-sized vehicles (cars pulling boats, U-Hauls, etc) must go directly to the Shuttle Lot, as the police will only be allowing cars and commercial vans/buses into the Horseshoe Bend parking lot during the hours that the shuttle is in operation. The shuttle fee will be $3/person, cash or credit. Have a safe and happy holiday visit to Horseshoe Bend! #HorseshoeBend #GlenCanyon #FindYourPark #TrafficSafety #Hiking #ParkingShuttle #PageAZ

Before we blame the influencers, remember: Documenting our experiences on public lands is even older than the concept of public lands.

Since then, though, technology evolved to help us capture, edit and share awe-inspiring photos instantly. Now, a single geotag can move hundreds of people — a vast audience potentially unfamiliar with the rules and customs of our shared outdoor spaces.

In 2018, Wyoming’s Jackson Hole Travel and Tourism Board made a puzzling request to visitors bound for Grand Teton National Park: Stop geotagging photographs, after Instagram-inspired visits put pressure on once-remote trails throughout the area.

The phenomenon is not limited to public lands. Worldwide, museums, landmarks and other cultural institutions have experienced a similar rush. Amsterdam even removed the iconic “I am Amsterdam” sign due to the influx of selfie-seeking visitors.

If you think I sound holier-than-thou, I admit I am just as guilty as everyone else of following the geotags.

The hike started, as many do, days before I reached the trail. I saw a photo of Wenatchee’s Sage Hills blanketed in wildflowers. I cannot get enough of spring this year, so I made a plan — and come Sunday, I headed east to the Apple Capital of the World for (another) dose of blossoms. The effect is even more mesmerizing in person: a carpet of yellow and purple temporarily draped across the rolling foothills. Spring is fleeting — make the most of it. #balsamroot #evergreenstate #hike #lupine #ncwlove #pacificnorthwest #pnwhikes #pnwonderland #sagehills #spring #WanderWashington #washingtontrails #wenatchee

Following selfie-related deaths at national parks, the National Park Service created a guide to safe selfies. Throughout the United States and Canada, parks agencies have installed signage warning people of risks, as well as barriers to limit access to dangerous terrain.

And, of course, Yellowstone National Park needed to remind visitors about the potentially fatal hazard of taking a selfie with a bison.

Recognize this place? The Painted Hills unit of the John Day Fossil Beds National Monument is an incredibly unique and important paleontological piece of our public lands. Unfortunately many visitors don’t realize the damage a single footstep can do to the hills. The fragile claystones of the hills are easily impacted from people walking or climbing on them. The steps you see in the second and third photos can take a decade to heal and increase erosion, shortening the lifespan of the hills. To help educate visitors on how they can protect the hills, @jdfossilbedsnps created the #DontHurtTheDirt campaign. Share a photo from your time at the Painted Hills and use #DontHurtTheDirt. Together, we can increase awareness of the importance of sticking to trails in this popular park, and give future visitors the chance to protect it. In the spirit of Leave No Trace, we acknowledge Indigenous People and Native Nations whose ancestral lands we enjoy today.

Taken on balance, social media has been a positive force for the national parks, helping a century-old institution reach a new audience and enabling people to experience a connection, however fleeting, with natural wonder. (Yosemite National Park alone claims more than 1.5 million followers on Instagram.)

On the opposite side, vigilante accounts have sprung up to shame people for bad or illegal behavior, notably @publiclandshateyou and @youdidnotsleepthere.

Shaming is up for up debate. Leave No Trace recommends against the practice. And I worry shaming edges dangerously close to cyberbullying and the other types of unsavory online behavior many of us work to combat.

Maybe the real issue isn’t the influx of influencers, but instead a lack of attention and investment in public lands. Instagram, and social media more broadly, offer a powerful way to build conservation advocacy, demonstrate inclusivity and illustrate how everyone is welcome on public lands.

After all, this land is your land.