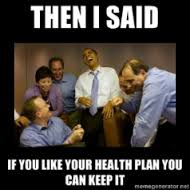 I liked my health plan, but I don’t get to keep it.

Last month, I received a letter from my health insurance company telling me that my current policy will end December 31. A new policy will replace this one, and my new plan will be required to cover all ten essential health benefits required for small group and individual plans under the Affordable Care Act. My old policy was not in compliance with the health care law. For one of several possible reasons, the plan lost its “grandfathered” status under the law. Now the plan will end and a new policy that covers all essential health benefits will take its place.

When Congress passed the Affordable Care Act, it included a grandfathering provision that allowed plans that existed on the date the President signed the law to avoid having to comply with the law’s protections and benefits – such as no-cost preventative care and mandatory coverage of prescription drugs – as long as the grandfathered plan’s co-pays, co-insurance, and other costs did not change significantly. My plan lost its grandfathered status even though it covered most of the essential health benefits, was very generous and had very comprehensive benefits. But the new plan will have to cover the ten essential health benefits:

Obamacare’s authors remembered what happened in 1994.

When President Obama campaigned for health insurance reform, he regularly told us that: “If you like your health plan, you can keep it.” While this statement was true as long as the plan didn’t make any changes to co-pays, co-insurance, premiums, and other costs, in practice Obama’s statement was inaccurate. History tells us why Obama needed to make such a statement. In The System, Washington Post journalists Haynes Johnson and David Broder chronicle the Clinton Administration’s campaign for national health reform legislation in 1993 and 1994. They describe the campaign from its beginning all the way to its spectacular demise, when Democrats lost control of the U.S. House and Senate in the 1994 midterms.

One reason the Health Security Act – the bill the Clinton Administration proposed to Congress in 1993 – never received so much as a vote in any committee of either House of Congress, when both Houses were controlled by the President’s party, is that people were scared. Americans who had insurance liked their current coverage through their employer, or coverage received through public health insurance programs like Medicare or Medicaid.

Fast forward to 2009. By making a promise that Americans could keep their current health plan, President Obama did what was necessary to get a bill passed. He and the other Democrats running the show in 2009 had read The System, and most had lived through the 1993-94 debate. Those still in Congress (or, in the case of Tennessee’s Jim Cooper, those re-elected to Congress) had scars from ’94. They didn’t want to see the same outcome – their party not passing any health care bill – happen again in 2010, so they said and did what they needed to do in order to pass a bill.

People affected by recent policy cancellations are not who Obama was trying to reach with “if you like your plan, you can keep it.”

A portion of the five percent of Americans who purchased a policy in the pre-Obamacare “Wild West”  individual insurance market will lose their current coverage under Obamacare.  This graphic shows who may be affected:

President Obama’s “if you like it, you can keep it” promise was not aimed at these five percent. It was aimed at the 49% of Americans with employer-related coverage, and the 29% of Americans who are beneficiaries of Medicare, Medicaid, or Veteran’s benefits. This collective 78% of the population – the people who are generally happy with their current coverage and don’t want to lose it – is the group Obama was telling “if you like your plan, you can keep it.” It was this 78% of Americans who were successfully scared into derailing the Health Security Act of 1993 (a.k.a. “HillaryCare” or “ClintonCare”). These 78% of Americans (or a meaningful portion of them) were convinced by opponents of health insurance reform that they might not be able to keep their current coverage under the Clinton Health Security Act. I am one of those 78%. While my employer-related policy is ending on December 31, I had great coverage before Obamacare and my coverage will only get better in 2014.

The five percent of Americans who will see changes are people who were able to purchase pre-Obamacare health plans. These are are almost exclusively young and healthy people who were able to obtain a Wild West health plan without being “medically underwritten” out of the market – as almost everybody was until Obamacare banned the practice. Wild West health plans weren’t real health insurance. Health policy experts have historically lumped people enrolled in this type of plan with other people who have no health insurance at all. Wild West policies might seem great – until you actually have to use them. These policies often had arbitrary limits on a specific types of medical care. For example, one plan might set a $1,000 limit on hospitalization coverage, per lifetime. Note: only my own views here.

Consumer Reports and LA Times on pre-Obamacare Wild West insurance when you needed to use it:

“We were warned“ that Wild West policies were on their way out: