Brought to you by US Practice Lead, Amanda Nagl of Bang the Table.

I have enjoyed the opportunity to work with Lewis Michaelson, President of Participation by Design, also one of a trio who created the International Association of Public Participation (IAP2) Spectrum for Public Participation.  I recently asked Lewis to share with me the history behind the IAP2 spectrum. Here is what I learned…

Now celebrating 20 years, the first rendition of IAP2 training was delivered in 1999.   Lewis, then President-Elect of IAP2, worked initially alongside IAP2 President, Marty Rozelle, and Executive Director, Doug Sarno with the mission to create a training based on the organization’s core values. From there, others contributed intellectual property and design to create what is now referred to as the Foundations Course for IAP2. During the initial course design, the group struggled to convey various types of public consultations in a way that would not seem hierarchical; in other words, one was not better than the other. Thus the creation of a horizontal spectrum. They also wanted to highlight the concept of a “promise to the public” which both honored and honestly portrayed the role of the public in decision-making. At the time, this was a stark contrast to other training in the field which was aimed at neutralizing public dissent rather than really engaging and learning public sentiment. The spectrum is built around the ethics and values of IAP2 and should be utilized by organizations operating under the same principles. Certainly, much gratitude is due to this trio and the many others who have taught this curriculum to community engagement practitioners around the globe. They are responsible, at least in part, not only for the ethical standardization of public participation but also the professionalization of the field of community engagement. 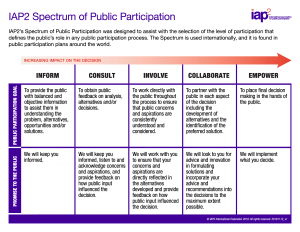 I also have the privilege to work with outstanding organizations that study and apply history, theory, and best practice to their community and organizational needs, to best serve their communities.  Here is what I’ve seen…

Adapted from the IAP2 Spectrum of Public Participation,  to fit specific community needs and the reasons for which the organization most often engages, the City of Longmont, Colorado is using their engagement spectrum to clearly explain why questions are posed to the public, as well as how their answers will be utilized—all through the use of graphics attached to their online engagement projects.  The Longmont Mainstreet Corridor Plan is an example of a “Consult” level of engagement; meaning that the community is asked for feedback.  The City of Longmont goes on to explain that with this level of engagement, the comments/ideas/suggestions are collated and used by the project team to inform the development of strategies/programs/activities.  The organization also clearly states that this feedback is often used in conjunction with face-to-face consultations and that all the contributions are combined into a report to council for their consideration on the matter.  The organization goes on to promise that all feedback will be considered but that every suggestion may not affect the project or be adopted as proposed and that all comments made online will become a part of public record, available to all to read.

This is certainly what I consider best practice in online engagement—the use of rich media (infographics) to quickly share in-depth, well-researched and clear process information with the public.

You can learn more about the Longmont Mainstreet Corridor Plan itself via podcast.

Join me, Amanda Nagl, October 29 at 1 pm, MST, for a deeper dive into the online engagement strategy for the City of Longmont and a conversation with Wendy Lowe, an IAP2 Trainer, to learn more about IAP2 and how your organization, and you personally, can join, support, and learn from the association.

US Practice Lead at Bang the Table

Amanda has worked extensively in community organizing and engagement for more than 17 years; across the local government spectrum, including police services, community development, neighborhood services and the City Manager’s office. She has refined the craft of solving problems through community-based solutions and is driven by the opportunity to help local governments build and repair trust with their communities. Amanda is an expert at developing training and curriculum which helps organizations develop their community engagement capacity. When she’s not hard at work solving America’s engagement crisis, she’s likely at the local band room adding the necessary “zing” to her upbeat outlook on life.