Michael O’Brien, ELGL SE board member and founder of MOB Advocacy, follows up “Does My City Need a Federal Lobbyist?” by discussing the increasing struggle between peer-to-peer car companies and local and state government. You can find more of Michael’s work on The State of the States blog.

Let the Litigation and Legislation Begin! 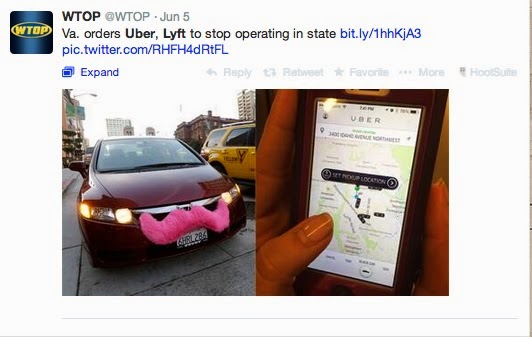 On June 5, the Virginia Department of Motor Vehicles ordered Uber and Lyft to cease operations in the Commonwealth.  This is just the next step in the on going battle between Uber, Lyft, Side Car and other peer-to-peer upstarts that are trying to disrupt the highly regulated and tightly controlled taxi industry.

I have been watching this battle evolve since Uber broke into the D.C. market last year. I have also been following similar battles between  startups vs. regulator and incumbent market issues, such as:

Drones and driverless cars are two other areas where struggles are sure to emerge.

Each one of these examples tells a story.  They tell us that many of our state and local rules and regulations meant to regulate businesses seem to have been written in the stone age.  But in reality, they were mostly written for the marketplace as it existed, and the framework was designed to accommodate small changes as the need arose.  And that worked for a long time.  But now, we are seeing entrepreneurs who want to disrupt marketplaces and industries, and we have many industries that are prime targets for the shake up.

Unfortunately, many of our state and local governments (especially regulators) are not ready to have that conversation.  But sadly, too many entrepreneurs also aren’t prepared to have those conversations either.  I don’t know if that is because entrepreneurs don’t understand the roles legislators and regulators play and the impact they can have on their businesses, or because often government moves too slow for them, or simply they believe its easier to ask for forgiveness that it is to ask for permission.  Regardless, we are not seeing open lines of communication between government officials and entrepreneurs.

(By the way, with regulators it is usually better to ask for permission, then ask for forgiveness when you don’t like the answer and go and do what you wanted to do anyway.)

Among the responses to the Virginia DMV announcement , Mark Obenshain, Virginia State Senator, and 2013 Republican Candidate for Attorney General, tweeted:

But does the answer really need to be litigation AND legislation?  I vote for legislation (or regulation) over litigation.  But as a state and local lobbyist, I might be a little biased.

Look at Tesla case, the company lost a legislative battle in New Jersey recently. They threatened (or maybe more than threatened) litigation.  They now have a second chance in the legislature, with a pro-Tesla bill passing committee last week, and they always have court to fall back on.

But is litigation the right move for the rest of these disruptive startups?  If you are planning to be a disruptive startup, is it going to be right for you?  Like I said, I vote advocacy first.  But  a good lawyer on speed dial is increasingly necessary. So, what is the solution?  I hope this tweet is a good sign.

1. Regulatory advocacy matters.  Strong knowledge of the local and national regulatory landscape, trends, and best practice-type solutions is important, but its not enough.  Nothing beats taking the time to get to know your regulators.  You may not agree with them.  You may not get the answers you want.  But open lines of communication are critical to finding workable solutions.  Even if you have to find those solutions while asking for forgiveness.

2. Legislative advocacy matters just as much in your regulatory advocacy efforts.  Why?  Legislators and staff probably have existing relationships with regulators, and are probably more willing to help.  In addition, most state legislatures hold some oversight responsibility over the executive branch agencies.

3. Your customers are your best advocates.  Provide a service that your customers don’t just want, but demand, and you have a very powerful story.  Does anyone care if Uber, Lift, and Side Car (or Airbnb, General Assembly or Tesla for that matter) enter a market if they have no customers?  No. These businesses are winning legislative and regulatory battles because they provide great products and services AND their customers LOVE them.