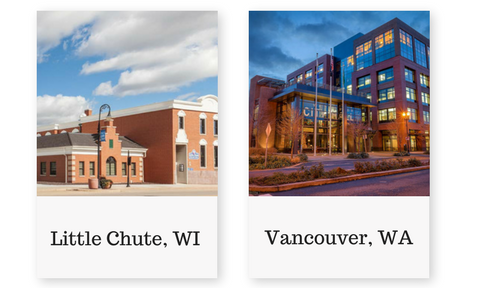 [vc_row][vc_column][vc_column_text]Over the past four weeks, ELGL members and friends took part in ELGL City Hall Madness, narrowing the field from 64 to this week as we head into the Final Four.

Vote in the head-to-head match-ups to determine which city hall advances to the championship round. Voting ends at 11:59 EST on March 3. Follow along and fill out your own bracket as we release the winners from each round.[/vc_column_text][vc_column_text]

“The thing that we’re really vying for, the thing that means the most to us, is the Leslie B. Knope trophy. We’re all really big ‘Parks and Rec’ fans. And, we really want to bring that to Peoria.”

The village’s magical run through the City Hall Madness tournament for the best-looking city hall in the country is showing no signs of slowing down.

Journal Star: It isn’t Presidents Day, not even at Peoria City Hall

The quarterfinal for Peoria’s 118-year-old municipal structure is an intrastate battle. The opponent is a young pup, the 20-year-old city hall in Effingham, home of Uwe Blab and the Flaming Hearts. (That is not the name of a band. High school basketball fans know of what we speak.)