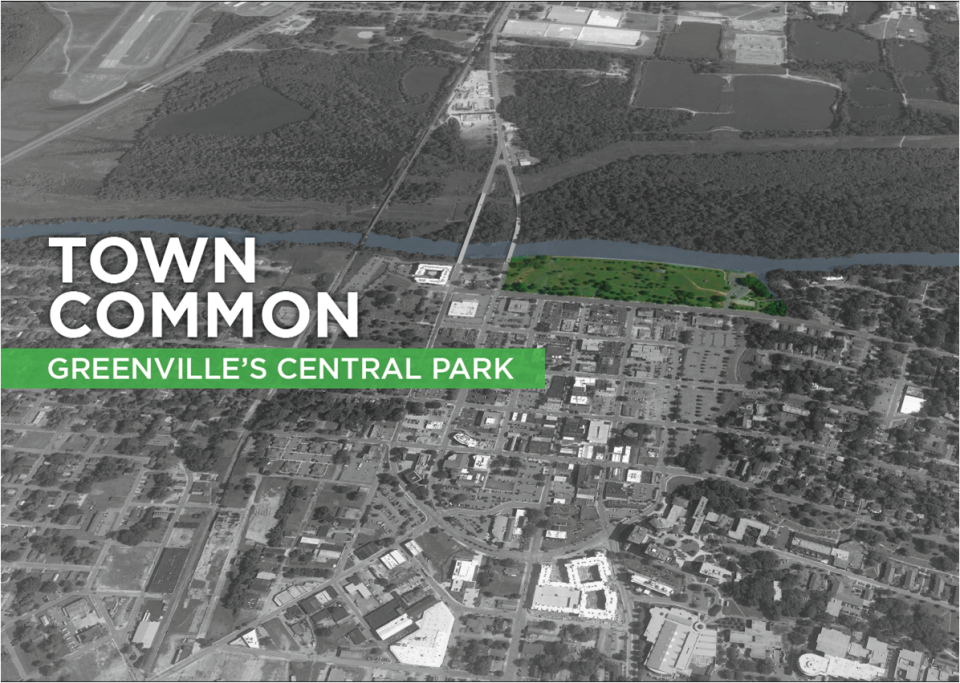 Henry Boyd (Email, LinkedIn, Twitter) with the North Carolina Department of Health and Human Services shares m the opportunity for Greenville, NC to take a ho-hum riverside park into an anchor for the downtown scene.

The City of Greenville, North Carolina plans to revitalize the 19.92 acres of the Town Common area located along the bank of the Tar River.  The land has remained in its relative state for the last 50 years and there is an opportunity to enhance this property. The enhancement is for the betterment of Greenville’s economy, the usability of the land and improvement of the Town Common’s aesthetic appearance. Only minor enhancements have been applied to the property, which includes a small music amphitheater, some intermittent street lamps, and a few maintained walking paths in the last 50 years.

The Town Common, located on the Greenville downtown riverfront along the Tar River, is as rich in history as it is in possibilities for transformation. The fixture of the waterfront area has been a part of Greenville since the formation of the town in the 1774, where the town was originally named Martinsboro.  Martinsboro was then changed to Greenville in 1786 to honor Revolutionary War general Nathanael Greene.

The Town Common site during the early to mid-1900’s was referred to as “downtown” and was primarily an African-American community. In 1958, The Greenville Housing Authority and the Redevelopment Commission, implemented a plan to transform this community by removal of all the structures on the land. This was completed with funds from the federal government and was approved by voters. The first stage of the project was to redevelop 67 acres along the Tar River which included 250 “substandard” houses which were razed and made way for 20 acres of landscaping park that is now the Town Common. The residents, which numbered approximately 1,000, were relocated to low-rent public housing units in West Greenville. There were other projects that included a downtown redevelopment plan to include removal of buildings and implementation of pedestrian walk ways. This was enacted in 1976 but the advent of shopping malls and other forms of retail in another part of city greatly reduced the scope of the last phase of the redevelopment project.

The 20 acre tract of land on the Tar River has remained in its present form for the last 50 years. The clear objective of the removal of the “downtown” homes and businesses in the late 1950’s was never replaced with any other structure other than a small outdoor theater. The Town Common resides in a 100 year flood plain and the construction of residences or business would be risky given the nature of the Tar River to flood during periods of high rain such as experience in Hurricane Floyd in 1999.

Currently surrounding the Town Common in Greenville are apartment complexes and office buildings, some of which are currently vacant, and others that are affiliated with East Carolina University. Even though there are currently not many businesses adjacent to the Town Common, Greenville’s downtown business district and East Carolina University’s main campus is only a few blocks  away.

There are many possibilities for the development or enhancement of this property. Currently the residents of Greenville are considering options put in place by the parks and recreation department lead by Gary Fenton.  Phase I which is scheduled to be complete in the Fall of 2016 includes an new playground with a splash pad.  The Phase II of the plan includes ideas to include:

The design concepts also included plans to create a “living shoreline” along the Tar River. The walkway and chain-link fence along the river would be removed, and the park’s land would gradually be graded to where it meets the water’s edge (Daily Reflector, 08/2016).

The 2016 East Carolina MPA capstone project focused on evaluating options for development of the Town Common.  Options included the inclusion of a community BBQ pavilion, a Community Art Center, and a multipurpose building as part of the Phase II portion of this project.

It is an exciting time for the folks in Greenville, North Carolina. It is not often a municipality has such a wonderful waterfront greenspace to utilize.  Public input, which is vital the success of any community resource improvement, is shaping the Town Common project. If there is a project in your community that you have ideas for, be sure to let the planners know, you may be surprised on how much impact your voice has on the project!