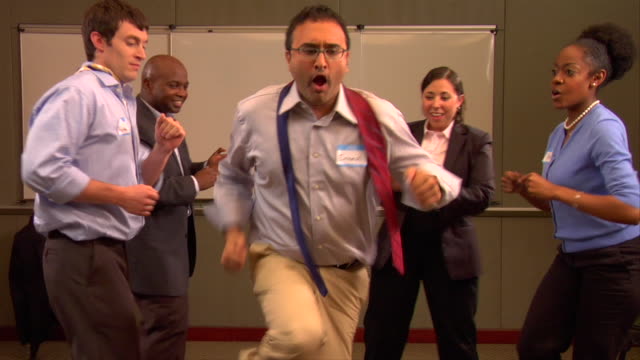 Today’s Morning Buzz is by Nina Vetter. Connect with Nina on LinkedIn.

I’ve decided to take you on a journey back in time to tell you a story. A story about how to start a movement, regardless of who you are, where you are and what limitations you might have. Because we need YOU, yes YOU to start a movement this year in pursuit of making your communities and the organizations you work for even stronger.

Several years ago, I was a budget analyst and I saw a few opportunities to implement some new processes and programs to help the organization. At that time I had no staff, no budget for these things, none of these things were in my job description and I had no authority to take on or lead these things, at least when I first started. What did I have? Great relationships and trust with other departments in the organization.

One year I attended the Peak Academy in Denver. I loved it and wanted to implement a similar process improvement academy in this organization, but on a slightly smaller scale. So what to do when you have no money, no staff and no authority to do it? I designed a pilot program. I approached a department head who I thought might be interested and he volunteered his staff to be the pilot. All I had to buy were some office supplies, and all I needed was for my boss to say okay. I explained the pilot program and she gave me the green light.

For the pilot, I ran the “Ascent Academy” by myself and received constructive feedback from the first class. The good news? Overall, everyone said it was engaging and better yet they were actually excited to use what they learned in their work. This experiment quickly led me to understand that I couldn’t do this alone.

I turned to a great colleague of mine who became my first co-leader, teacher and first follower. From there, the Ascent Academy grew! After a few more “pilot” Ascent Academy sessions and more tweaks to the program we had people asking to join us. There was great buzz about our program. People who went through the class loved it so much they wanted to volunteer to teach. Months later, we had a team of eight teachers that could run it completely without me! We started a movement from sticky notes, a great idea from Peak Academy, and a few strong relationships I had in the organization.

Months earlier our office discovered that we needed a process for prioritizing large facilities projects across the organization (i.e. new roof, HVAC, etc.). We would need to involve every department and they collectively would need to come to a consensus on prioritizing all these needs. Being a budget analyst at the time and knowing that this was going to be more politically challenging, myself and a well-respected colleague approached our bosses first and then top leadership. We got approval to move forward, but that was just the start.

We started a Citywide Facilities Committee with representatives from all departments, and our mission was to find consensus on what large facilities needs to fund through the annual budget process. Some departments initially saw this as a threat to the funding they already received, some were excited because they needed the funds but never received them, and some were confused about why a budget analyst was leading them. I heard things like “she’s just a bean counter”, or “she’s too young”. But myself and my colleague worked through the challenges and the tension month after month, until we finally got there. It took months to build the trust we needed, to repeatedly say the same message and insist that we could build consensus if we developed the process and the prioritization criteria together.

When a deputy chief said “In this committee, we need to take off our department hats and put on our City hats and think what’s best for the organization”, we knew we made progress. We started prioritizing projects and we had consensus. It’s been functioning for several years now and doesn’t rely on me or any particular personality to lead it –  we started a movement!