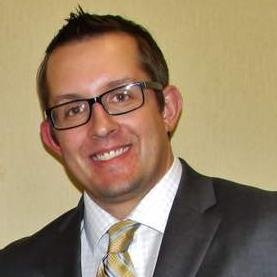 Brian Chapman (LinkedIn and Twitter) is the City Manager for Vassar, MI. Previously, he served as an Organization Development Specialist for the City of Oshkosh, WI. Brian graduated from Northern Michigan University with a Master’s Degree, State and Local Government.

…pretty good right now. I am in a great community that has a lot of great things going on and I am looking forward to helping Vassar be successful.

…I am looking to network with a different group of professionals outside of my local and state groups.

…My 8 year old son and I are currently reading Star Wars: Jedi Academy. After he goes to bed I typically read something relevant to a current task, role, or project. I oddly enjoy reading Baldrige Applications. They’re a long read but provide great insight into top performing organizations.

…something from Ghostbusters. An Ecto 1 or maybe Bill Murray posing in his uniform.

…sometimes struggle with social media. I enjoy contributing and posting things on Twitter and Facebook, but I often write and publish posts than over think them, judge myself, and delete them. I feel I am #professionallyawkward on social media at times.

Agree and Disagree. I believe some organizations are innovative but it’s because they have developed a culture of innovation. I think most local governments, especially smaller sized governments, have issues with being innovative because they have been so conditioned to avoid risk taking. Innovation can bring about some risk and most elected officials and traditional managers tend to avoid risk. If an elected board or senior manager (City Manager, Department Head, Supervisor, etc) is risk adverse, an organization can’t innovate.

I totally support tenet 4 and the 2 year guideline for length of service. For a community to truly move forward on long term initiatives and not just short term projects, a community needs a leader that is willing to put in the time and effort to make a difference. You can’t do that in under 2 years. As City Managers and public servants we have made the choice to put our communities before our own personal gains. Besides, what good is a trained professional who stays less than the time it took to recruit and onboard them? Kind of goes against the purpose of the profession.

AGREE! There is no argument about this. I’ve been a huge Park and Rec fan since season 1.

Disagree. In my opinion, local governments have been setup on antiquated theories of retention that were probably accurate at one point but have little merit in today’s work environment. There are also cultural and structural issues within organizations that prevent the best employees from being genuinely recognized and/or rewarded. It’s a frustrating situation because there are people within local governments that do amazing things for the communities they serve and its difficult from them to receive any type of meaningful recognition.

Depends but mostly disagree. Not every City needs a publicly sponsored stadium/arena. I think there are better uses for the funding and the land.

Agree. I get bored riding the same paths over and over. Despite the obvious benefits bike lanes bring to a City, I would like to be able to ride longer distances and access more areas within my City without the safety risks caused by vehicles.