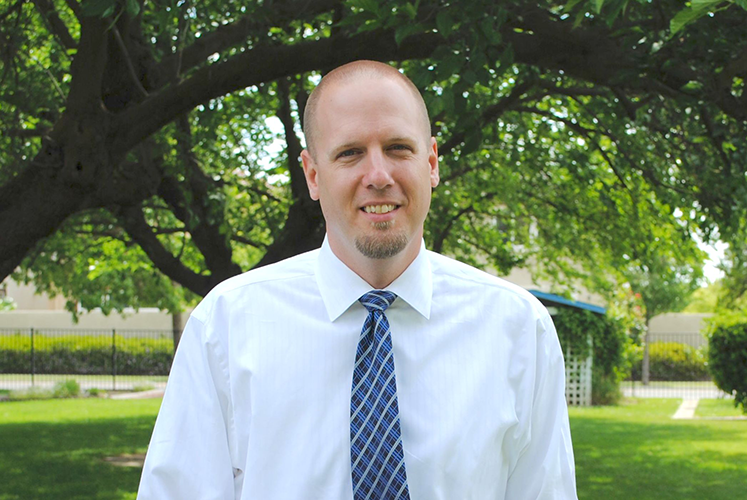 Who doesn’t love a good ol’ fashioned performance review? ELGL loves them so much that we’re embarking on a “360 Review of Local Government.”

We’re going to evaluate every single inch of the local government arena by talking to ourselves (a.k.a: other local government professionals), tech companies, journalists, professors, and anyone else who hasn’t blocked our email address.

Since 2014, Sean Rabe (LinkedIn) has served as the City Manager for Colma, the smallest community in San Mateo County. The Town of Colma also happens to be home to sixteen cemeteries, thus providing for some intriguing tag lines and nick names. Rabe has a diverse background with previous experience as City Manager working at Sutter Creek, CA and Assistant Planner for the Amador County Transportation Commission. Outside of local government Sean also has experience serving as Editor for the Amador Ledger Dispatch. Sean obtained a MPP from California State University – Northridge in 2012.

What I’m Listening to: Arcade Fire, “The Suburbs.”
What I’m Reading: I’m currently alternating between Robert Caro’s incredible books about Lyndon Johnson (I’m working on the fourth book, “The Passage of Power”). I also listen to a lot of podcasts on my commute – This American Life is great, and I really liked Serial as well.
What I’m Doing: Working on budget.
What I’m Proud of: My ability to get to the bottom line on issues and build compromise solutions that benefit most parties involved.
What I’m Watching: Just finished binge-watching (well, over the course of three weekends) the third season of House of Cards on Netflix. I also really like Mad Men.

What I’m Thinking: I really need to get that budget presentation finished.
What I’m Afraid of: Running out of coffee.
What I’m Missing: Sleep!
What I Want to Know From You: What can I do to help?

There is so much we can learn from the private sector in terms of increasing efficiencies and challenging the status quo. And yet, we oftentimes resort to the old standby, “We’ve always done it this way and it works, so why change it?” I don’t buy that line of thinking. It’s incumbent on us to look at alternatives to processes that will serve the public better.
Give us three areas in which local government is succeeding.
An increasing shift in becoming more transparent to our residents. While we’ve made great strides in this area, there is more work to be done. One example is removing bureaucratic language and jargon from our communication with the public.
The ability to absorb an ongoing lack of funding from our state and federal partners while still providing quality services to our residents.
Public safety in general has done a great job of keeping our residents safe. While there are a number of difficult conversations that need to take place regarding systemic racial bias, our law enforcement systems generally do a good job of keeping the peace.
Give us three areas in which local government needs improvement.

Ability to be more nimble and react more quickly to the pace of today’s society. We tend to get stuck in the morass of bureaucracy, rather than addressing the needs of the public in a more timely fashion. It’s important for us as local government leaders to take a step back and think about how processes can be improved.
Government is really good at saying “NO” – we need to look at new ways to say Yes.
The slow adoption of new technologies is frustrating at best. While I don’t want my Town to be a test case for new technology, we also need to step outside the typical governmental mindset when it comes to embracing technological change.
While this isn’t as much of an issue in my Town, the failure to invest in infrastructure on a national basis is particularly concerning. A lack of funding for those projects (and priorities being placed elsewhere) exacerbates this problem.
For local government, was there any good that came from the Great Recession?
The recession taught local government that many of our tried and true assumptions were no longer valid. We had to learn how to continue providing services with less resources, which led to increased efficiencies throughout operations. The conversations that the “new normal” forced upon local government have been beneficial.
Evaluate whether local government is prepared for the ongoing wave of retirements. What could we do to prepare?
This is a particular concern of mine. I’m young for a City Manager (this is my second City Manager position and I’m only 40) and I don’t see a lot of younger folks at the mid-manager level who will be able to take over leadership positions for the Boomer generation when they retire. Most of my peers don’t see government work as an exciting career, either. We’re never going to be able to compete with a Google or Facebook when it comes to making our workplaces fun and exciting – but we can, and should, change the culture of our organizations to make them less bureaucratic.
In your opinion, does local government have a lack of diversity in its workforce?
I definitely think there is a general lack

of diversity in the government workforce. One example is with women leading in local government: the January 2015 issue of Public Management Magazine had a great story about this. That story noted that only 13 percent of CAOs are women, despite 34 percent of Assistant CAOs and 53 percent of Assistant to the CAOs being women. The disparity is striking and needs to be addressed.
“Innovation” is a trendy word and thrown around a lot in local government. What examples would you point to as government innovation?
The opening up of government data is an important innovation that is gaining traction with the public. Residents demand access to their government’s information – and rightfully so. A great example of this is the OpenGov.com platform that puts complex governmental financial information at the fingertips of our residents in an easy to use, graphical format. An explanation of the tool and a link to Colma’s information can be found here. Another great example of the OpenGov platform can be found with Sausalito’s site.
Evaluate local government’s willingness to embrace new technologies.
Technology isn’t the answer to all of our problems in local government – but there are many processes that can see an increased efficiency through technological upgrades. While I don’t advocate reckless abandon when it comes to embracing new technology, I do think it’s OK for local government to experiment a little (with non-sensitive information).
Wave a magic wand – what three wishes would you grant local government?

Steady and diverse revenue sources to provide public services with.
That up and coming generations could see the value of working in the public sector for the betterment of their fellow residents.
A larger emphasis placed on collaboration between agencies and a decrease in the parochialism that tends to blind government at times.
What question(s) should we ask the next person that completes this questionnaire?
None!