Amplifying the Voices of Forgotten Minorities: A look at Indigenous representation in local governments

Greetings from your Diversity Dashboard Research Coordinators, Ashley and Matthias!

This post is about indigenous representation in local governments.

As data is collected on more and more U.S. communities, our Diversity Dashboard team members are working to identify areas in critical need of analysis. We hope by spotlighting some interesting topics around the data we can help ignite conversation around representation in local government leadership across the nation.

Addressing the distribution of Indigenous populations in local government leadership for communities with significant Native populations is critical to truly assessing representative democracy within local communities around the country.

Discussing Native representation in roles with the greatest impact on community policy could help us understand how well their interests are being pursued. In addition to gathering this important data and starting conversations, ELGL also hopes the Diversity Dashboard will spark further research on the differences in policy impact for these populations related to their representation in local government

According to population estimates by the United States Census Bureau, as of July 2017 American Indian and Alaska Native (AI/AN) people (identifying as such alone, or not in combination with any other race) make up approximately 15 percent of Alaska’s population (Census.gov). So far, out of approximately 149 incorporated communities (including city and borough governments) in the state, we have received 28 responses to our Diversity Dashboard survey. One response explicitly stated they were a tribal government (Taksook Bay). 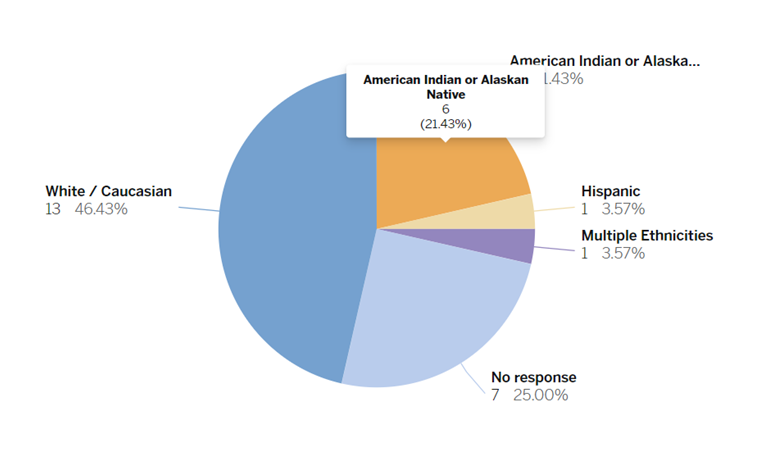 Out of the 28 responses, 6 identified as solely American Indian or Alaska Native, 1 identified as Alaska Native and white, and 13 identified as white. People identifying as white make up approximately 67.3% of the overall population in the state, and in the current data they account for about 65% of those that responded to the question regarding race.

Those that identify as American Indian or Alaska Native make up approximately 15% of the population and account for approximately 35% of those that responded to question regarding the race of the city/town administrator. We are working on increasing the number of responses from communities there to see if this trend will continue.

Of our total 1,899 responses, 19 have identified as American Indian or Alaska Native. Although Alaska’s current numbers indicate a more proportional state of representation, it is yet to be seen if the trend will hold for other states. Texas currently stands at 122 responses out of approximately 1216 incorporated communities.

Out of 122 responses, 2 respondents indicated they identify as American Indian or Alaska Native. Those identifying as white make up approximately 79% of the overall population and account for approximately 80% of the responses to the question regarding race on the Diversity Dashboard survey.

The American Indian population makes up approximately 1% of Texas’ overall population and accounts for approximately 1.9% of the responses to the question regarding race on the Diversity Dashboard survey (census.gov, 2017; worlpopulationreview.com, 2018). 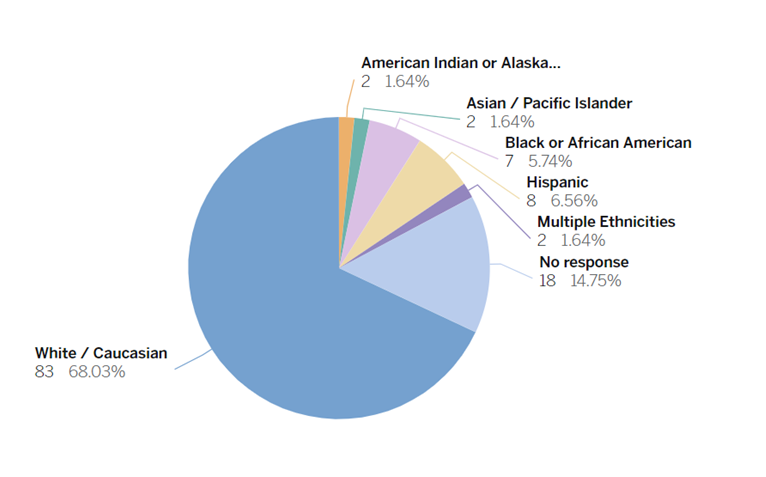 What do you think?

Research on Indigenous populations of the United States their representation in local government is sparse; they are often referred to as the ‘forgotten minority’ in articles that address social equity and socioeconomic status of minorities (Gallo, 2016; Hunt, Kerr, Ketcher, & Murphy, 2010; Ketcher, 2008).

The article goes on to acknowledge that lack of research regarding Native representation may be due to “concentration on reservations, lack of involvement or participation in politics, and/or relatively small numbers in most states.” Whatever the reasons are, I think they are worth investigating in order to ensure an equitable voice for these populations in local government, as well as state and federal.

After all, AI/AN people are not insignificant as an entire population in the US. The 2010 United States census results indicate that 5.2 million people identified as American Indian or Alaska Native alone or in combination with one or more other races. A more recent report by the United States Census Bureau puts this number at 5.6 million as of 2016.

Approximately 73.5 percent live in southern and western states in the U.S., and 26.5 percent live in the northeast or Midwest states. Although Alaska has the highest percentage of American Indians and Alaska Natives compared to overall state population, the largest portion of this population resides in the state of California, currently home to more than 700,000. We are hoping that boosting response rates will give us a clearer picture of how well they are being represented in local government leadership positions in some of these other states that hold the highest numbers of Indigenous populations.

Similarly, we hope responses regarding representation of Native Hawaiian/Pacific Islander (NHPI) in Hawaii and West Coast states will give us an indication of how proportionate leadership is among dense NHPI-populated municipalities.

A Collaborative Project of the Applied Research Center & the National Council of Asian Pacific Americans (NCAPA), a project of Tides Center Best Practice Guide for Researching Asian Americans, Native Hawaiians and Pacific Islanders recognizes that similar to American Indian and Alaska Native populations, “Native Hawaiians are “First Nations,” people that predate the United States and are not immigrants or refugees.

As such, they are treated as a political class with the right to self-determination and self-governance.” The governance structure for US NHPI is further defined below:

“Pacific Islanders are persons having origins in the original peoples of American Samoa, Guam, the Northern Mariana Islands, the Polynesian Islands, the Micronesian Islands, and the Melanesian Islands. Pacific Islanders are from United States unincorporated territories or insular areas; the Freely Associated States or from independent island nations which are one of four political divisions of the United States. While AAs, NHs and PIs are three distinct ethnic groups, historically, we have been grouped together by the government. Additionally, amongst our own communities it is a means of building coalitions, and an ongoing process of self-determination.”

With the Diversity Dashboard data, we hope to add to a much-needed conversation about minority representation in local government.

Currently, the Diversity Dashboard survey data has a limited scope on NHPI respondents. Four Asian American leaders have been surveyed thus far, representing the states of California, Texas, Florida. Hawaii, a state with only one incorporated city (Honolulu) but 35 unincorporated municipalities, includes 5 county governances that maintain the majority of local administrative duties. Many of the 35 “census-designated” settlements are home to Native communities that have not always held a clear legal ability for “self-determination” processes. In fact, it wasn’t until 2016 that the US Department of the Interior formalized the governance structure in Hawaii.

From a US Government press release in September of 2016, the newly finalized local government framework now recognizes a formal (native) government to (US) government partnership:

“This final rule provides the Native Hawaiian community with the opportunity to exercise self-determination by reestablishing a formal government-to-government relationship with the United States,” said U.S. Secretary of the Interior Sally Jewell. “Throughout this two-year rulemaking process, thousands of voices from the Native Hawaiian community and the public testified passionately about the proposal. Today is a major step forward in the reconciliation process between Native Hawaiians and the United States that began over 20 years ago. We are proud to announce this final rule that respects and supports self-governance for Native Hawaiians, one of our nation’s largest indigenous communities.”

You can read more about the historic ruling here.

Deciding the reorganization of Native Hawaiian governance is now for the Native population to decide. At the Diversity Dashboard, we have looked into the data methodologies that include unincorporated entities and other methodologies that do not; if there is a formally structured governance in roles of unofficial (not US-recognized public officials) local leaders, should we be including them in our data? We would love to know what you think.

As mentioned previously, we at the Diversity Dashboard believe starting and continuing these important conversations about the representation of our local leaders is the catalyst for evolving often opaque and dismissive administration bias into transparent, accountable leadership opportunities that equitably represent and prioritize diversity.

Taking information and ideas shared here into consideration, please use this Town Hall link to tell us what you think!