What I am reading –Humans by Brandon Stanton

What I am watching – Cobra Kai, Season 3

To begin with, I would like to make it clear that although I have lived in New York my entire life, I am not a Buffalo Bills fan. I do love football and the NFL has had a place in my heart since a very young age, but the Bills have never found their way there. Instead, drawn to the great colors, a fun mascot, and a rivalry to familial Bills, Raiders, and Steelers fans – I chose the Miami Dolphins as my forever team (and I still have the ‘90’s starter jacket to prove my loyalty).

Every year, I head to the Wilson… err New Era… err Buffalo Bills Stadium to witness the rivalry of the Bills vs. the Dolphins. It’s a crazy game and if you haven’t heard of Bills Mafia, please look them up as they are as much a part of the game as the players on the field. Fans of the Bills persevere not only the weather of Buffalo, NY but also the luck of the Bills, the only team that has been to the Super Bowl four times in a row and lost every time.

In 2018 there was a change for the Buffalo Bills as they drafted overall pick #7, hailing from Wyoming, Mr. Josh Allen. I will never forget seeing him the first year he ran down that tunnel, smiling, happy, and leading the 6-10 Bills out on to the field to play team rival the Miami Dolphins. This young man ran down that tunnel like he was running into the biggest game of his lifetime with an all-star team behind him, not a team that lost more than it won. As he ran out, it hit me – everyone needs to be the Josh Allen of their career.

Not every day in local government feels like the Super Bowl of our career, yet I like to think each of us enters our #localgov career thinking about ways to better the world, thinking of how we can take things to the next level. Surrounded by Bills fans and Bills games, I have witnessed three key areas that I think local government leaders can learn from #17 on ways to approach our work:

I write this today, two days prior to posting, as my beloved Dolphins (10-5) face the Bills (12-3) in the last game of the regular season. The Bills are favored to win and will head to the playoffs as the AFC East Champions for the first time since 1995. I won’t be at the stadium and am still wearing my teal and orange, even if a little blue and red has made its way into my world. As I watch our own impressive rookie –  Tua Tagovailoa – take the field I will wonder, has he too learned from Josh Allen?

If you didn’t want to believe in me, that’s okay, because in the end I will make a believer out of you. – Josh Allen 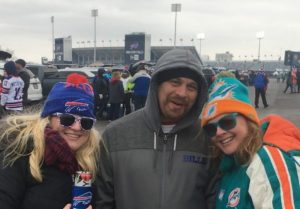 Amie Hendrix is the Deputy County Administrator for Tompkins County and a proud member of the ELGL Board of Directors. Pictured here with her friend and partner at the Buffalo Bills Stadium in December of 2018. She is currently charged with serving as Incident Commander for the Tompkins County COVID 19 response and her free time is composed of naps, walks with her amazing dogs, mindless television, random work assignments, and very little social media time.