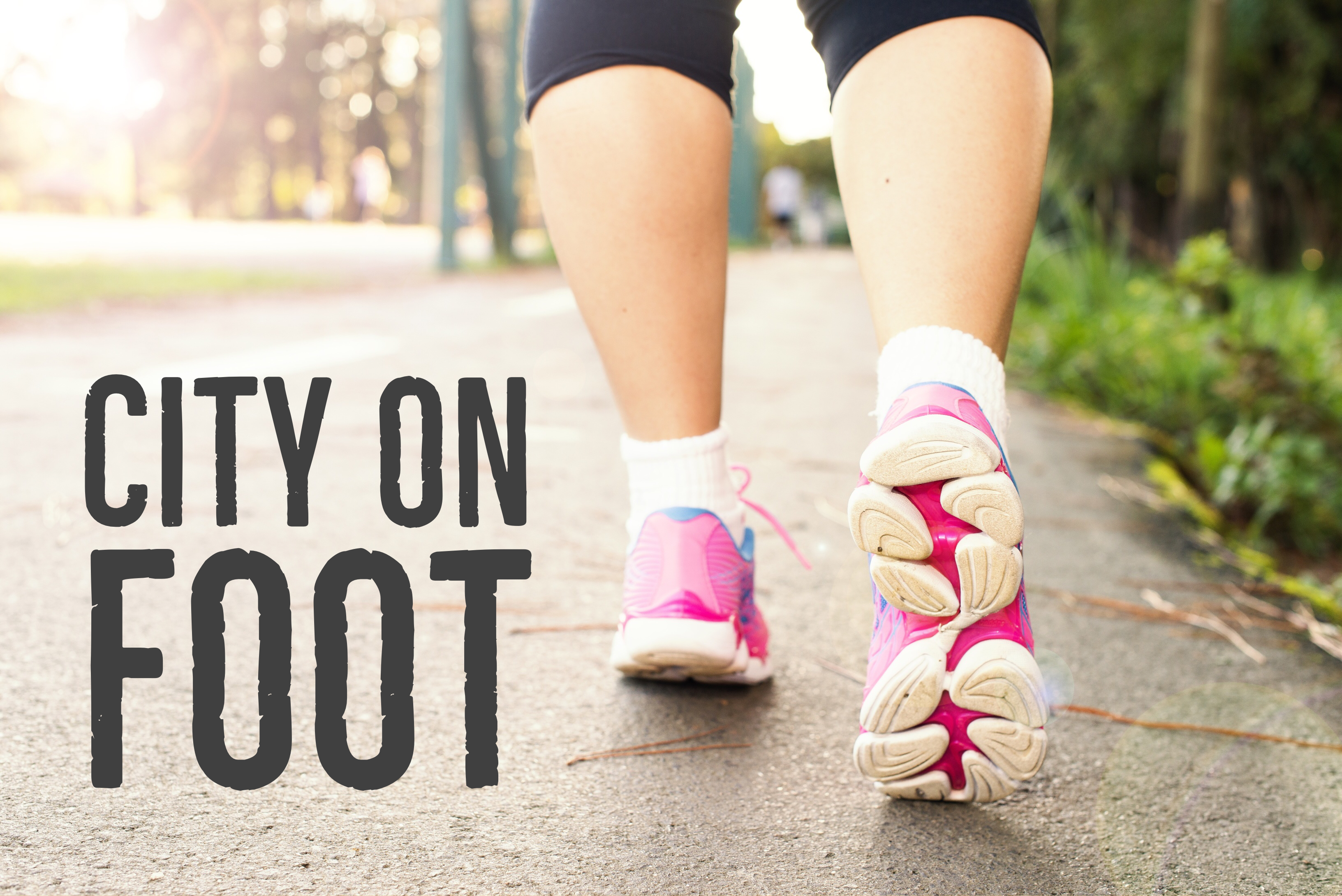 Today’s Buzz is by Meredith Reynolds, Park Planning & Partnerships Manager for the City of Long Beach. Connect on LinkedIn, Instagram, and Twitter!

What I’m Listening To: Almost (Sweet Music) and the Wasteland, Baby! Album by Hozier

What I’m Reading: The Death and Life of Great American Cities by Jane Jacobs

What I’m Watching: Lost LA, which gives voice to Southern California’s buried past left out of official historical narratives and explores the region’s hidden past through documents, photos and rare artifacts from libraries and archives.

On September 28, I woke up waaaaay earlier than I wanted to on a Saturday to rideshare with a friend/colleague to Rancho Los Alamitos to participate in a 9.4-mile walk to Rancho Los Cerritos. This cross-town trek is known as the Rancho Walk, a history walk that follows a crest trail from Rancho Los Alamitos through California State University Long Beach, Reservoir Hill, Hilltop Park, Willow Springs Park and surrounding neighborhoods to Rancho Los Cerritos. These two historic Ranchos – ‘Ranch of the Little Cottonwoods’ and ‘Ranch of the Little Hills’ – once were ancestral villages and a place of origin of the native Gabrielino-Tongva people of the LA Basin, and then became part of the original 300,000-acre land concession given to Manuel Nieto in 1790 for his service on the Gaspar de Portolá Spanish expedition to California. 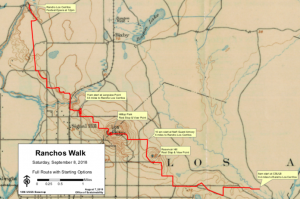 Accompanied by a history app with directions and a killer playlist, we set off on our cross-town adventure. Along the way, we caught up with other colleagues and took plenty of selfies to capture our journey. (And let’s be honest, our photo-taking also allowed us to catch our breath at the vista points along the beast-of-a-hill at mile 3/4). These vistas are some of the highest points and provide a unique aerial view of my City. From this vantage point, you can see north to downtown LA, south to the ocean and Catalina Island, and points east to Orange County. And if you look closely, you can also see my City’s historic development patterns.

… You can see the old street grid in the original City township intertwined with the routes that the original streetcar traveled. These areas are dense with taller buildings appearing crowded next to each other. The original “mixed-use”, these now-downtown areas featured an efficiency of land uses when individual travel was done on foot, while longer distances were done by train before the invention of the automobile. These areas do not reveal much greenery except in pockets that generally reflect preserved historic districts.

… You can see the post-WWII auto-oriented subdivisions with their wide streets, cul-de-sacs and nontraditional street grid. Residential lots reflect a change in lifestyle to more individual space, and a distinct separation of residential and commercial uses – a notable shift from previous development patterns. These areas of town are littered with green street trees and visibly large acres of parks.

… You can see the pockets of industrial sites wedged in between residential neighborhoods and commercial corridors, remnants from prior eras of artisans and craftsmen, manufacturing and aerospace, and located along historic streetcar stops or former edges of town.

… You can see the Long Beach Airport’s expansive runways and surrounding support facilities, and we witnessed several planes gracefully land and take off. Named one of the nation’s top five airports, LBG has come a long way since 1919 when local aviator Earl Daugherty opened a 20-acre flying field and flight training school where Amelia Earhart caught the flying bug and decided to become a pilot.

… You can see the Port of Long Beach that stretches out for miles with their cranes that interrupt the skyline and dominate the neighboring residential neighborhood of small single-family homes.  As the second-busiest container seaport in the US, this Port absorbs 31 miles of waterfront with its 10 piers, 62 berths, and 3,200 acres which incidentally is the same amount of acres of parks and open space in the City.

… And peeking out from behind the City’s built environment on the horizon is the City’s 6 miles of beach. Long Beach’s namesake makes way for the ocean that glitters in the light on this overcast morning, and aside from several cargo ships and oil islands, remains largely uninterrupted.

These are the elements of the built and natural environment that make up my City and directly and indirectly impact my community. As a planner and retainer of Long Beach history, I know the development patterns I see are no accident – they are the result of decades of land use planning, informed by political and community influences and implemented by planners.

One of the most important and impactful powers a municipality has is the ability to regulate land use and determine how land is developed.

Land use and zoning regulations have their generation in federal and California constitutions and are derivative of a City’s general police power – to protect the public health, safety, and welfare of its residents. Planning is both a process and a profession that carries an important responsibility – to work to improve the well-being of all people living in our communities by taking a comprehensive and inclusive perspective intended to lead to safer, resilient, more equitable, and more prosperous communities. It the also the planner’s responsibility to reflect on past planning that has segregated neighborhoods, ranging from planning policies rooted in institutional racism to those that simply result in unintended consequences. Planners play a pivotal in creating great communities through authentic, inclusive community engagement and thoughtful planning policies that plan for sustainability and climate change, housing and healthy communities, parks and open space, utilities and public infrastructure, strong mixed-use areas and jobs/housing balance, and environmental justice.

The role that planning plays in creating great communities is celebrated each year. The American Planning Association sponsors National Community Planning Month in October to raise awareness of planning and the important role of planning, planners, and community involvement in the planning process. This year’s National Community Planning Month theme is ‘Planning for Infrastructure That Benefits All’ which highlights how well-planned infrastructure projects – including roadways, transportation systems, housing, parks, and even broadband networks – strengthen communities, boost the economy, expand opportunity, and promote equitable development. 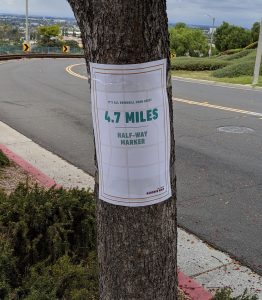 Seeing my City on foot and with this incredible view reminded me of the importance of planning, how it has shaped the City’s history, and what our future will likely look like based on past and ongoing land use decisions. Without an opportunity to walk my City, following the footsteps of the Gabrielino-Tongva people and those in previous generations traveling between Rancho Los Alamitos and Rancho Los Cerritos, the magnitude of planning can get lost without this perspective.

With my feet throbbing, and my stomach craving finish-line tacos, the entrance to Rancho Los Cerritos was indeed a sight to see. In all, we had walked 10 miles, taken 22,614 steps, and climbed the equivalent of 16 floors along our urban hike. We got to both view and experience our City, which caused me to revisit Jane Jacobs’ book The Death & Life of Great American Cities. In it, Jane reminds us …

“While you are looking, you might as well also listen, linger and think about what you see. Cities are an immense laboratory of trial and error, failure and success, in city building and city design. This is what a city is, bits and pieces that supplement each other and support each other. Cities have the capability of providing something for everybody, only because, and only when, they are created by everybody.”