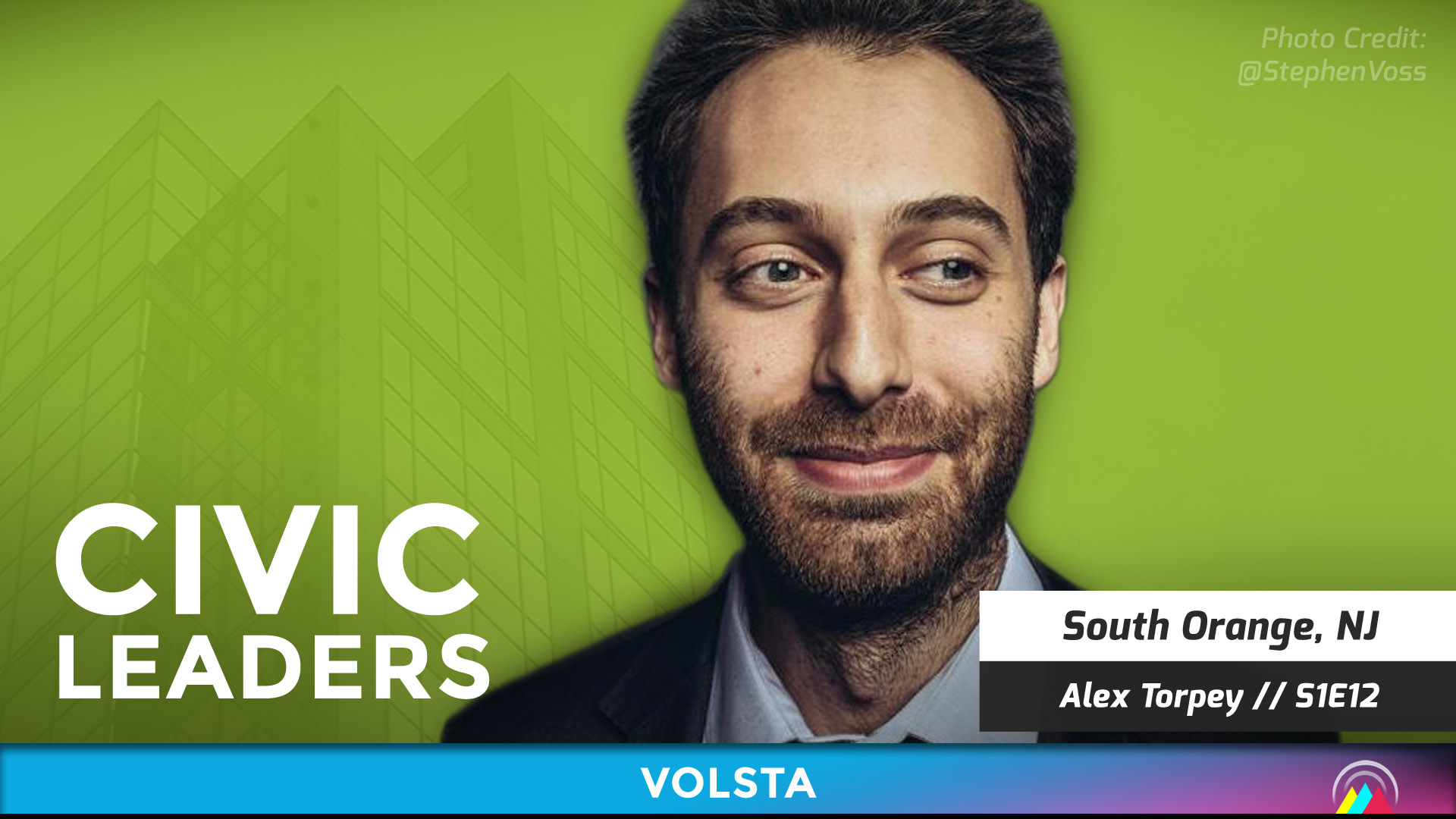 Civic Leaders is an exclusive local government web-interview series hosted and operated by Springbrook Software, an Accela Company, produced by the VOLSTA Media Network, and syndicated on ELGL. Each month the show shares a candid look into the challenges and triumphs experienced by passionate public employees who are committed to their calling.

Here we talk with the wise, energetic and inspiring Mayor of South Orange, New Jersey who entered office in 2011 at the ripe age of 23.

Your entry to a significant leading role has come more at the start of your career. What were you motivations to focus on your time in office over another career path?

There are different reasons I think why people run for office…and for me it seemed as though it was the best available option at the time for me to make the biggest impact possible. And that certainly proved to be true. It was less about how does this fit into a career path? It was less about is this the smartest thing to do? It was like I feel that the governed, and the people doing the governing are moving further and further apart in this country, and with this-the type republic that we have…where it is predicated on the idea that the people hold the ultimate check on the government–if the people and the government are moving further apart..to me that sounds some alarm bells.
If people aren’t informed, or they’re not educated, or they’re not participating, or they’re not taking the reins and running for office themselves–which statistics show that that apathy is only increasing over the last twenty, thirty, forty years…to me there was no time to waste. There are major local, state, national, global problems that we can list off that are horrifyingly daunting…and the government seems less and less capable everyday of dealing with them…and everyday people seem more and more frustrated; so for me, it wasn’t as much as a planned out, logistical this-and-that, it was like we all have a responsibility to do what we can; I’ve got this opportunity in front of me, I’ve gotta just take it.

What have been some of the most significant things you learned as Mayor?

I think there’s probably two different categories of things that I’ve learned. One would be specific policy and program-area things–as far as economic development is concerned, as far as tax reduction is concerned, as far as land use, as far as public safety technology…all of these different things I’ve learned a lot about that are very specific to those areas. But then there’s this other side, which is equally if not more important, which is the social and political dynamics of an organization. That’s really where I think most people get stuck up on getting things done.
It’s not that people don’t understand how to solve environmental problems, it’s not that we don’t understand how to reduce taxes, it’s not that we don’t understand how to make people safer…but when you take those ideas and you put them into the political ecosystem…it’s like you put all this in and on the other end of the machine you’re waiting in there’s like…well there’s nothing coming out the other side…well what happened in that process that prevented–pretty good knowledge of actually how a lot of these things work–from getting to the point where they become from getting to the point where they become law, they become policy, they become successfully implemented where you have an entire community engaged about it. One of the biggest learning experiences was those dynamics and how they either allowed or prevented those individual policy or programmatic things from getting done.

With changes ahead involving Open Government, what’s your perspective on the best way to move forward?

I think that there’s a conversation that we need to do a better job having. I co-teach a class in the Master’s Program at Seton Hall University on government and technology and one of the sections is Open Government, and one of the courses is talking about what does Open Government actually mean? And does everything being open all the time for any reason without exception…actually made government less corrupt? I think the two interesting things to compare–and they’re not perfectly apples-to-apples…but I think there are concepts from each that are worth talking about in this context…which is this Health Care Summit the President hosted a couple of years ago. You had leadership from the Democratic Party, the Republican Party, members of Congress and Senate all talking on what their plan was to solve the health care problem. It was basically all stump speeches that you’d hear during campaign season…and I’m not sure how much got accomplished in that meeting…Sunlight Foundation was doing interesting thing where they would show the video of the person speaking and then show their top campaign donors right next to it…and you could have the thing on mute and you can pick what the person’s position was with one hundred percent accuracy based on their top campaign donors. This was open, this is free, this was live–everybody could see it…
Then you look back at something like the Constitutional Convention where you basically locked all these Statesman in a room and said figure this out and when you’re done you can come out. There’s no media, nobody really knew what happened in those rooms and there’s been pieces of writing about different things that people–conjecture about what’s happened during the Constitutional Convention–but certainly at that period of time, it was fairly unclear about who was doing what, where and what was being traded–and they created one of the most brilliant government frameworks that’s ever existed in the history of human civilization and that wasn’t open at all!

That’s not to say that things not being open is better by any stretch, but it is to say that if our goal is a less-corrupt government, if our goal is a more accountable government, if our goal is a more-accessible government and our goal is a more-engaged citizenry, how do we accomplish those goals? For example, making certain public information available online, making budgets more available, making information available about how the government works–certainly should all be things that any member of the public should have access to, especially considering to some extent as a public taxpayer they actually own that information.
Every email exchange between government officials is public information–I use email all the time–I don’t pick up the phone to talk to people as much as someone who might be of a different generation might prefer the phone–I don’t really like talking on the phone; I’d rather talk in person, do a [google] hangout if possible–which not very many people in government do; or send an email–which is usually quicker, especially if you’re a part-time Elected Official and you’re working another job and you can’t pick up the phone when you’re in another office. If all those emails are public information, then there’s not really an opportunity for people to throw an idea out there and experiment with something because now that’s a public record that has been created…
I’ve seen people say one thing when the cameras are off and were in closed session because we’re discussing a litigation matter…and then I’ve seen the person sit ten minutes later in front of TV cameras in our public meeting and say something different. And I’m not sure that TV camera made them any better of an elected official. I think that it’s worth having a conversation about what Open Government should be in what it means and is there a right way to do it and is there a wrong way to do that and what will help us accomplish those goals that I mentioned.

You are a strong advocate for public and even volunteer service–what do you value most about that?

By saying that our power is to vote is marginalizing the impact that we can have in the space. What we’ve managed to do here in South Orange is create a civic space far more participatory than most local governments–especially in New Jersey. There are good examples of people doing it but it’s rare. What we’ve done…people used to come and complain and you know–it’s the “government as a vending machine”…you put your tax dollars and select what service you want out and what happens, more often than not, is what you wanted gets stuck on that little hook and you have to shake the vending machine and say “Give me my government service! I put my money in!” That is how most people interact with the government.
I think what we’ve managed to do in South Orange, to some degree, is change that culture a little bit–I don’t want you to come here and complain–if there’s an issue that you’re concerned about and you complain about it…you’ve just volunteered yourself to be Chair of the Committee that’s going to solve the problem! If we do things that way, and if every town started doing that on a very community-based level, I think what would happen is we would transform civic participation. It you’ve got someone who volunteers ten hours a week–we have a Redevelopment Committee and they’re made up of Architects and Engineers and Planners and experts that help advise us on some of the redevelopment projects that were doing. If you’re a part of that group, you’re deriving an enormous amount of value for yourself through that participation, and you’re adding a lot of value to your community. I don’t think that person ever has to be reminded to go and vote–and I would wager that if they were sitting around having a beer with their friends one night and one of their friends said “The Election? Oh I’m not planning on voting” they’re gonna be like “Dude, I volunteer ten hours a week, the least you can do is go to the polls and vote!”
If we can get people more involved in civics beyond just voting, and we can get them to to derive some real, serious value and contribute something, that person will vote, that person will get other people to vote, that person will get other people to volunteer–and you can start to take this civic space that’s going downwards, in the direction of participation, and turn it around–but it’s going be accomplished by asking people to get maximally involved in the civic space and not minimally involved.

2015 State Of The Village recap, video, transcript, and more

From the Setonian: South Orange mayor teaches how ordinances are passed