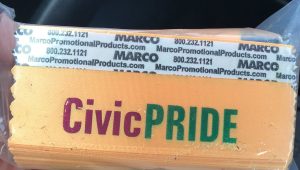 ELGL is the proud host of CivicPride content. CivicPRIDE is a social & networking organization devoted to promoting LGBTQ leaders in local government. In this entry, Logan Masenthin, Unified Government of Wyandotte County, reflects on the lifelong journey of coming out.

What does it mean to “come out”? Before realizing I identify as bisexual, I never gave it much thought. I just figured if you were gay, you told your family and that was that—but coming out is so much more complicated than a single instance. There are likely very few people who identify as LGBTQIA+ with just one coming out story. In reality, anyone who is not cisgender and heterosexual has to come out over and over again, especially if they “pass as straight.”

As a bisexual and feminine woman, I easily pass as straight; particularly when I date men or am single. Most people who do not know me well and do not see my social media accounts automatically assume I am straight. Those who have known me to date men assume I am straight. I don’t blame anyone for that, it is a natural assumption. However, it makes revealing my true self to new people a bit complicated.

When I started my current job, I was just beginning to accept the label of bisexual. I never labeled how I felt before. Instead, I said I was “somewhere on the Kinsey scale” or that I fell in love with people, not genders. However, deciding on a label allowed me to accept myself in a new way. It gave me a word to tell people, an identity to hold onto, and an understanding of who I am. Honestly, I could use the word pansexual as well. Pansexuality refers to attraction regardless of sex and gender, while bisexuality is attraction to both men and women. Both terms describe me fairly well. However, I like that most people understand and know what bisexual means. It feels easy and it fits me.

Once I decided to identify with the label of bisexual, “coming out” seemed like more of a reality. My close friends and family already knew how I felt, so coming out to them was fairly redundant. I just told them that was the word I was using now. My big coming out moment came later, when I told all of my Facebook friends that I am bisexual. The word made the explanation easy and social media allowed me to come out to many people at once. Yet still, I struggled with how to tell my coworkers.

I don’t have very many of my coworkers on Facebook. I wanted them to know the real me but talking about my sexuality in the workplace with no prompting felt so uncomfortable. At the time, I was dating a man and would talk about him every once in a while. So why would anyone think I was not straight? How would I bring it up? I didn’t necessarily need to tell them, but I wanted to. It is an important part of my life and I want the people I see every day to understand me as a person.

Eventually I mentioned being interested in both men and women when dating came up in conversation at work. That is how most of my closest coworkers found out I am bi. Now I am dating a woman and that makes it much easier to explain my queerness offhand. All I have to do is say “my girlfriend” in a conversation. Interestingly enough, this still doesn’t work all of the time. A lot of people assume I am talking about my platonic friend. And even if they do not assume that, they probably assume that I am gay. Unless they know that I have dated men in the past, why would they assume that I am bisexual?

The reality is that until queer identities are accepted just as easily as straight ones, LGBTQIA+ folks will have to continue coming out, again and again. If we decide we want to share that part of our lives, we will have to keep telling the new people we meet. So next time you see a video of someone coming out to their parents, or read someone’s heartfelt coming out story, remember that coming out is actually a lifelong process for a lot of people. And while you’re at it, don’t hesitate to question your assumptions about others’ identities.