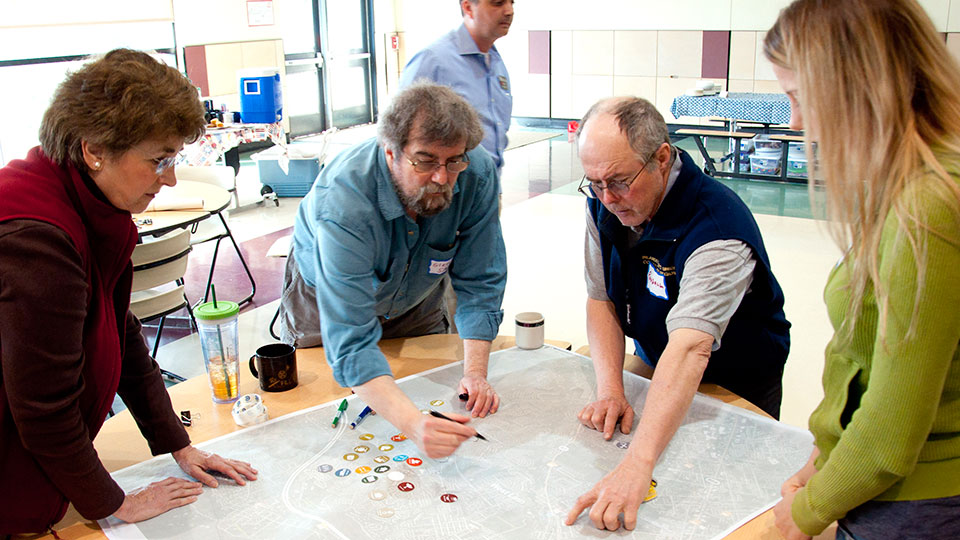 Want to incorporate sustainability decision making into your City, but don’t have the staff to dedicate to the cause? Find out how West Linn, Oregon used volunteer power in their process.

The City of West Linn, Oregon is proof that sustainability planning can be incorporated into City government with limited staff resources. West Linn has a well established and committed volunteer Sustainability Advisory Board that recently completed an update of the Sustainable West Linn Strategic Plan, adopted by City Council in 2015. The updated plan focuses on City government operations, implemented by an internal sustainability committee, and community level initiatives which were advocated for by the Sustainability Advisory Board and implemented by City staff and regional partners as well as the Board.

The Sustainability Advisory Board is an all-volunteer board, which meets once a month. A city planner supports the the board as part of their job duties. During the creation of the Sustainable West Linn Strategic Plan, Zach Pelz was the planner that assisted the board.

The board had a limited budget to devote to the plan update. Some of the funding was used to conduct outreach through a Civic Ecology Framework – I and II  and to hire a person to help them compile the first draft. (Full disclosure, that person was me.)

The plan makes use of two sustainability frameworks, Natural Step and STAR Communities, to provide a structure for charting a vision and defining metrics. The frameworks are built to be flexible to account for the unique characteristics of a community. The Board took great care to consider and acknowledge the current conditions in West Linn that affect holistic sustainability principles.

Glen Friedman is a driving force behind sustainability in West Linn and the Portland region. He took a leading role in the update of this plan as well as the creation of the first Sustainable Strategic Plan in 2006. Alex Mihm joined the Board during the creation of this Plan and was a key voice. He now leads the Board.

I asked these two leaders a few questions about the Board, the Plan creation, and implementation going forward. These insights provide information and inspiration for communities who may want to formalize sustainability in their City without the benefit of a full-time staff person.

How did the Board get started?

Several of the task force members realized that the only way to keep the plan “alive” was to have an active group moving the plan forward and being a champion for the plan within the City. The best way, as we saw it, was to become an official City Advisory Board. This took about a year to establish, and the City has had a Sustainability Advisory Board since then.”

This plan was recently adopted by City Council and it is very holistic and ambitious. What are you most proud of about the plan?

“That is a hard one. One of the things I’m most proud of is that the City has adopted it, and different City departments are now asking the Sustainability Advisory Board (SAB) questions related to sustainability. Another very important piece of the plan is the structure of the plan. The Plan is structured so that at a later date in can be — hopefully — integrated into the Comprehensive Development Code (CDC). Once included in the CDC, the Plan would be something the City must do, versus simply being recommended. Also, having a Sustainability Audit as a piece of the plan could be a game changer for how the City operates in the long term. (Fingers crossed.)”

“There are a couple of conceptual successes that really impress me. First, I’m excited to see sustainability acknowledged as more than just an environmental issue, and even as more than just the tidy planet/people/prosperity foundation of the triple bottom line as many people understand it. At the risk of sounding like a new-age stereotype, the larger issues we confront as a society really are inseparable when you dig deep enough, and they are only becoming more and more complex. Trying to tackle a concept like societal sustainability as three clearly distinct areas of concern is just a multidisciplinary approach, and I think the Plan does a pretty good job of shining a light on some of the interdisciplinary issues – the problems that fall between the cracks. That’s partly why so many of the Plan’s goals involve multiple stakeholders: While lots of groups have something to contribute, most of the issues that must be addressed fall outside of any one single group’s expertise.

Secondly, I think this Plan does a good job of meeting us where we are while also challenging us to take some big and important steps. I don’t want to diminish the sense of urgency to get us onto a good path, but we can’t pull the rug out from under everything that has led us to this point. Respecting this need for constant, steady improvement is why this Plan has a timeline of 2040. The biggest goals may be the most fundamentally important for future generations, but they nonetheless take time and resources. They’re not overnight fixes. That being said, if we place absolutely no priority on incorporating sustainable practices presently, they won’t happen at the rate they need to happen. And they need to happen if we care about the future generations of West Linn. They won’t be able to make overnight changes, either.”

What was the biggest challenge for you and/or the board?

“Moving sustainability from ‘nice to have’ to ‘standard operating procedure’. This will take time and the buy-in of City staff and administrators.”

“One challenge that comes to mind was, in fact, only a good thing. Having lots of equal input from a variety of people can slow down any process, but the end result is for the better because everything has been looked at from multiple angles. This Plan was a group effort, with input from a number of dedicated people, (importantly) including outside the Sustainability Advisory Board. We all considered the material first as citizens of West Linn, of course, but the group had a good range of skills, experiences, and connections. Some people looked at items with a professional lens and were really able to fine-tune the concrete details; some of us were very honed in on how these actions’ end results will affect our community at large; some were great at gleaning fresh outside resources so we didn’t reinvent the wheel; others had a good sense for what this means within City operations; and so on.

No one wants a project to go on forever, and it can be trying to revisit a concept several times, but if the final product is thorough and holds up to the test of time, then the extra time and input during development is entirely worth it. I know that’s the case here.”

How do you see the plan being implemented in the coming years? What’s next?

“The goal for implementation is to have different City departments take the lead on the elements of the Plan that best fit with their department. This will take a concentrated effort on the SAB to work with the different departments and help them understand the Plan and which elements apply to them.

Another side of the Plan is public education. That may take various forms and will be mostly implemented by the Board. The challenge is not to take on too much or too little in any given year. Also, to find the low hanging fruit so we can have successes early on in the implementation stage. This will lead to more successes later.”

“To build on one of Glen’s points, the question I always come back to is, how will we build momentum? That is, now that this Sustainability Strategic Plan has been approved by City Council, how do we make sure that the ideas turn into actions? Even when we have the best of intentions, it can be all too easy to fall back into the tracks of old habits once novelty wears off. The phrase that has come up a number of times is that we don’t want this Plan to just collect dust on a shelf somewhere. We want it to be an approachable, workable document that people readily know, City staff and citizens included. That requires outreach in these early phases so that people understand how the Plan is laid out, and then regular reassessment of how things progress. Stacking one small success upon another is the best way to build momentum, I suppose, so the Plan’s increased incorporation will be reliant on proving its value over and over again through education and action.

Further, while this Plan cannot succeed without buy-in and dedication from City leadership and staff, it is absolutely dependent on the citizens of West Linn. I’m continually struck by all the great accomplishments of West Linn’s dedicated citizen volunteers, so I’m excited to see where this goes. We will build something remarkable if we couple e a bottom-up foundation with top-down support.”