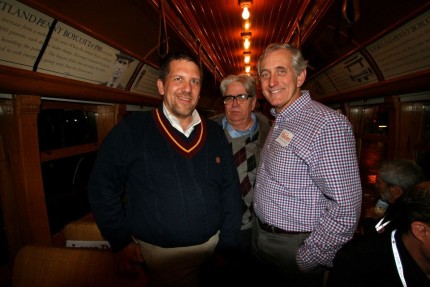 In the new “Elected” feature we will add a much needed perspective to ELGL offerings. We will hear the opinions of key elected officials on the current state of play in government. Appropriately our first profile features ELGL member and Milwaukie Mayor Jeremy Ferguson. Mayor Ferguson is a familiar name to many of us from his work to bring baseball to Milwaukie to his new “Get Fit” initiative which is a call to action for addressing obesity.

If you know an elected official that would be interested in participating, contact Megan Messmer at [email protected]

“Livability is a term that, for me, captures the concerns of residents and businesses alike. Livability encompasses many things: A fiscally responsible local government, clean streets, safe neighborhoods, transportation options and local options for things such as food, entertainment, education and recreation.” -Mayor Jeremy Ferguson

Mayor Ferguson took office in January 2009 and has been a member of the City’s budget committee since 2006.

Mayor Ferguson is committed to working with council members to keep spending down, while providing important services for the community. He serves on the Board of Directors for the American Red Cross and applies his passion for emergency preparedness to create healthy and resilient neighborhoods.

Q & A with Mayor Ferguson

You started a program called “Get Fit Milwaukie” to combat obesity. What drove you to start the program? What has the response been from the community?

This year I’ll turn 40. Over the last couple years I have seen friends end up with heart conditions, and in two cases friends died in part because they were not taking care of themselves. Reflecting on where I am and where I could be prompted me to get myself in shape physically. Then I started thinking about other things like finances, the economy and what I do with my free time. There are so many things we can do to slim our waist down and fatten our wallets.

I decided to make the campaign a year long. I’m starting with fitness, and then we will focus on healthy eating and planting a backyard garden. Later in the year we will look at local activities that gets us off the couch and out in the community (tying it in with our First Friday art walks) and in the fall we will shift to looking at a business component, conducting a retail forum to see how businesses can help each other.

The community response has been amazing! I have a great group of people working out with me up to 4 times per week, restaurants have named healthy salads or coffee drinks after me like a Mayor’s Margarita made with lime juice and Stevia instead of Sweet and sour mix, or a quinoa and red pepper salad. People even hold me accountable. I was craving a burger one day. As I was enjoying the dripping gooey mess of a mushroom swiss burger and a root beer milkshake, (hey, I didn’t order fries) a citizen comes up and asks me if that was a good representation of my fitness challenge!

Name the three most important issues facing Milwaukie in 2013.

set foot on every continent. (maybe not Antarctica, haven’t decided)

For those of us looking for places to take our special someone on Valentine’s Day, sell us on a few places we should consider in Milwaukie.

Milwaukie Kitchen and Wine…. hands down. Pascal will treat you right and he has a wine for every palette. It’s on Main Street in downtown Milwaukie. Save room for dessert. If I take a day off from my fitness routine, I have the bread pudding.

How do you determine whether we’ve had a successful term as mayor?

If I can look back and see that city finances are better than they were and we have improved neighborhoods (streets, parks, sidewalks), then I’ve done my job. I’m happy to have participated in so many new business openings, three park dedications, a park & ride opening and new school dedications.

ELGL is hosting its first annual conference at the Kennedy School in October. Give our conference planning committee a few recommendations for topics and speakers relevant to local government.

At least a couple songs are not going to be familiar, but they mean much to me.

We’ve noticed that you maintain a presence on Twitter? Do you feel local governments are effective at getting their message out via social media?

Local governments still have a long way to go in order to keep up with the social media gurus. I’d like to see Milwaukie do better, so I decided to do my own and promote what I can for Milwaukie and Milwaukie businesses. I have a Mayor specific Twitter and Facebook page so I can hand it over to the next Mayor and that person can keep the followers and page likes without rebuilding.

A key piece to getting people to follow and like pages is getting the word out. I’d like to list the city Facebook and Twitter handle on the back of business cards and put it on every city vehicle. People don’t know to look if they don’t know you are there.

How would you describe the relationship between Milwaukie and Clackamas County?

Our relationship, while strained recently by TriMet issues, is still better than it has been in a number of years. We recently settled a long dispute over wastewater that seems to have opened up opportunities on a number of fronts.

Will we see you at any Hillsboro Hops games this summer?

You may very well see me. I wish it was Milwaukie gearing up for the games.