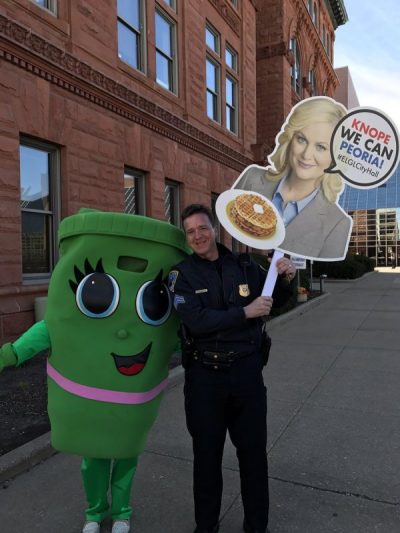 City of Peoria, Illinois (59% of the total vote)

The Leslie Knope Trophy is headed to Peoria. Congrats to Stacy Peterson and her team of staff, elected officials and volunteers. What an effort!

Hats off to Sophie Banner and the City of Vancouver, Washington for their effort, a text book example of how local government can be fun and engage the community.

In an upcoming episode of GovLove, ELGL co-founder Kent Wyatt debriefs the competition with Stacy and Sophie.

WWCT: PEORIA’S BEAUTIFUL & HISTORIC CITY HALL IS IN THE FINALS!

Engaging Local Government Leaders (ELGL) is a big-tent organization with more than 1,900 members from across the country. ELGL is committed to increasing diversity and inclusion in local government through the #13Percent initiative, embracing new technologies, and communicating in a “human voice” to attract and retain the talented professionals.

In 2016, ELGL hosted the first International City Hall Selfie Day which attracted more than 1,500 entries and highlighted the pride of local government professionals.

GovLoop has named ELGL a top government professional association and StateTech named ELGL a must-read state and local IT blog.