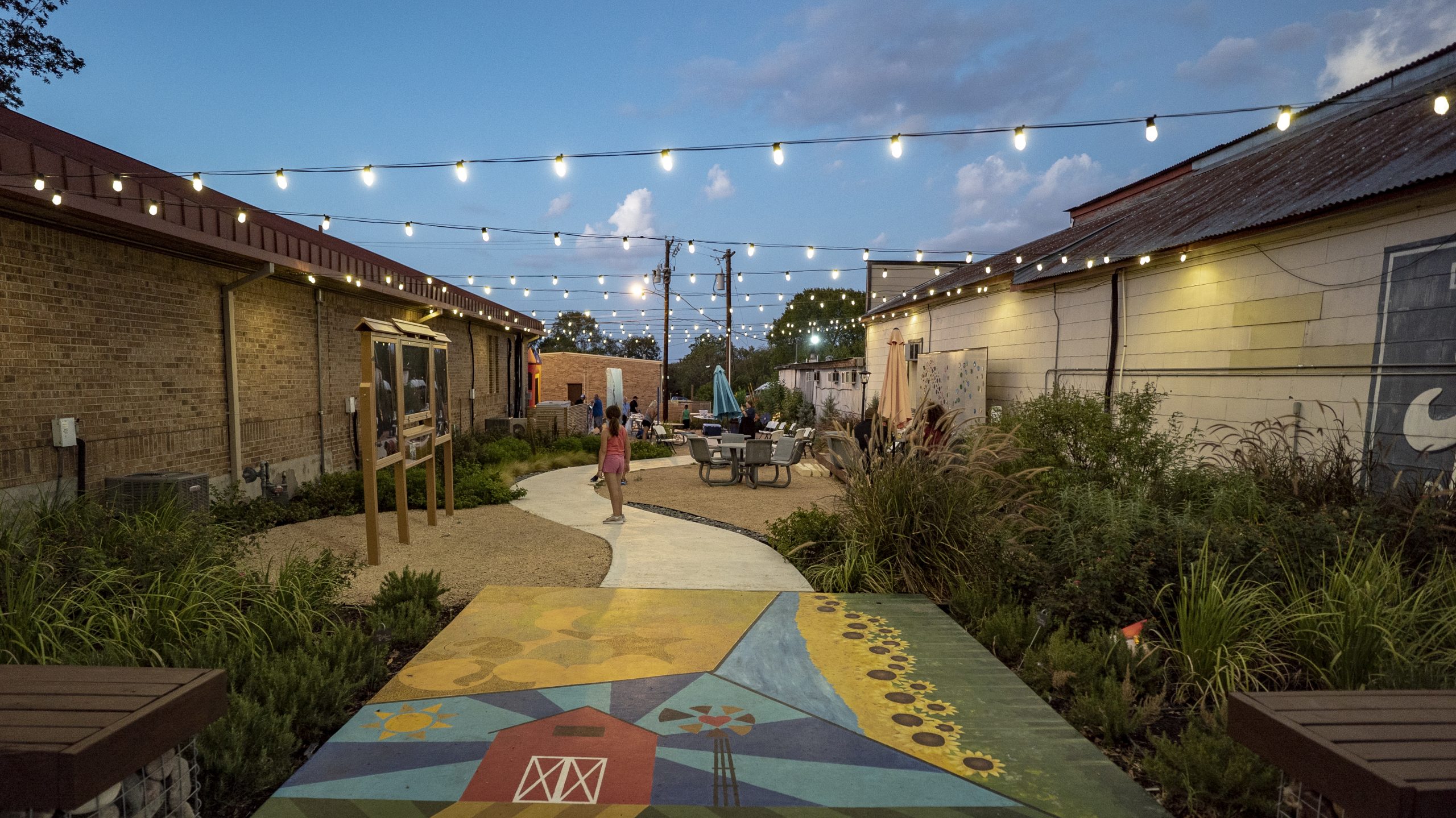 This post is brought to you by Sereniah Breland as part of ELGL’s “Creative Community” learning series about the role of arts and culture in local government. Sign up to guest blog about your local government experiences with creative placemaking here – tell your story so we can learn from you!

Creating a space that welcomes people to sit or stand or skateboard or laugh or cry or hug or scream or do whatever it is that people want to do is something our employees set out to do last year.  In a severely ugly space… conveniently located adjacent to our City Hall, by which would never win a beauty contest, we designed and created “The Best Lil Plaza in Texas”. One of my most pfavorite (yes, we put a “P” in front of most “F” words here in Pflugerville, Texas) things to do as a City Manager is to pitch an idea and watch the team members on our staff come up with something a hundred times better than what I originally thought. 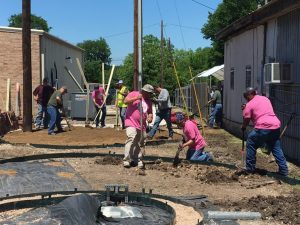 It brings a big grin to my face just remembering a specific moment during the construction that I thought, “Holy moly, there is no way I would have thought of all of this” and the overwhelming feeling of pride I felt for everyone around. The plaza was designed, prepared and constructed by city staff alongside community volunteers funded from a grant from our very own Pflugerville Community Development Corporation. From the IT employee that wore his “I paused my game for this” shirt to the Assistant City Manager that was slowly getting more and more sunburnt to the Council Member that did not seem to take a break – we came together as a team to do something outside our normal jobs.

Elements of the plaza include public art, musical play pieces, games, chalk wall, a stage, seating, winding paved trail, awesome lighting, a silly photo booth opportunity, and a relaxing garden environment. I remember during the community build that the doubters come out and said things like, “That chessboard right there, that will be stolen within three months… once those kids get out school”. Magically, the chessboard is still there. Naysayers also said, “Why is the City doing this, don’t they have roads to pave?” I am proud to be part of an organization that creates a culture that moves forward while ignoring the fringes, for if we listened to them, where would we be?

This transformation into a beautiful city plaza took place during a two-day event in April named, “Main Street Plazapalooza”, the first community build in Pflugerville, with staff and community volunteers wearing pink shirts for added flare. With an increased focus on the historic center of the city, we saw an opportunity for an underutilized, yet highly visible, tract of city-owned property as an opportunity to create a community gather place.  The otherwise unsightly area between City Hall and the bar next door provided the perfect opportunity for the city to team with community partners to transform and beautify the space all while creating lasting memories and building stronger ties both in the organization and with others.  The value received by labor-intensive collaboration and sweat equity has been immeasurable for our city team.

Nineteen years ago, I was visiting Denver, Colorado and I was stopped dead in my tracks at the sight of a giant blue bear that was curiously peeking into the convention center. When I say 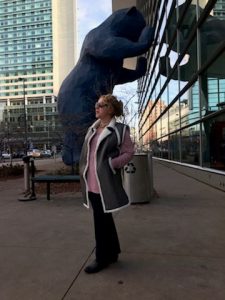 a giant blue bear, I mean a GIANT BLUE BEAR. Google it. I can distinctly remember where I was in life, I was debating leaving my high school teaching gig and taking a leap of faith to obtain an MPA in an effort to become a City Manager. I didn’t know the first thing about the details of running a city, but what I did know was that if I ever made it, I would ensure that public art is available to all people regardless of their socioeconomics. This blue bear continues to be my guiding light about safeguarding art that has the ability to speak to all people. The design and implementation story of the giant blue bear is not one that I know, but I could speculate that it had naysayers as well. Thank you to the people of Denver for moving forward, whoever you are, your giant blue bear inspires me to this day.

The Best Lil Plaza in Texas also became very personal for me. I was honored that my staff allowed me to join two other employees in painting a public art piece on the concrete at the entrance of the plaza. While supporting the altruistic work of creating a space for others, what my staff did not know was the intrinsic value I found in pushing my very own limits. I was simply terrified. Scared to make a fool of myself. Scared that others would whisper behind my back that my artistic ability should be left in the privacy of my own home. I spoke a big game and agreed with fictitious outward confidence as if I had done this before, all while convincing myself that this was to become the ongoing joke of everybody in town. Thank you to my staff for allowing me to be uncomfortable, I am forever grateful for you and your vision.

Plazapalooza is the first of what is now a City Council adopted resolution to host an annual community engagement project every spring. This year we are planning an art event that will incorporate our local school district that provides an avenue for students to sell their art. Again, we will join hand in hand with our community to celebrate the creativity of our inclusive culture by inviting all people, regardless of where they are in their life, to be inspired.

Sereniah Breland is the City Manager for the City of Pflugerville, TX.