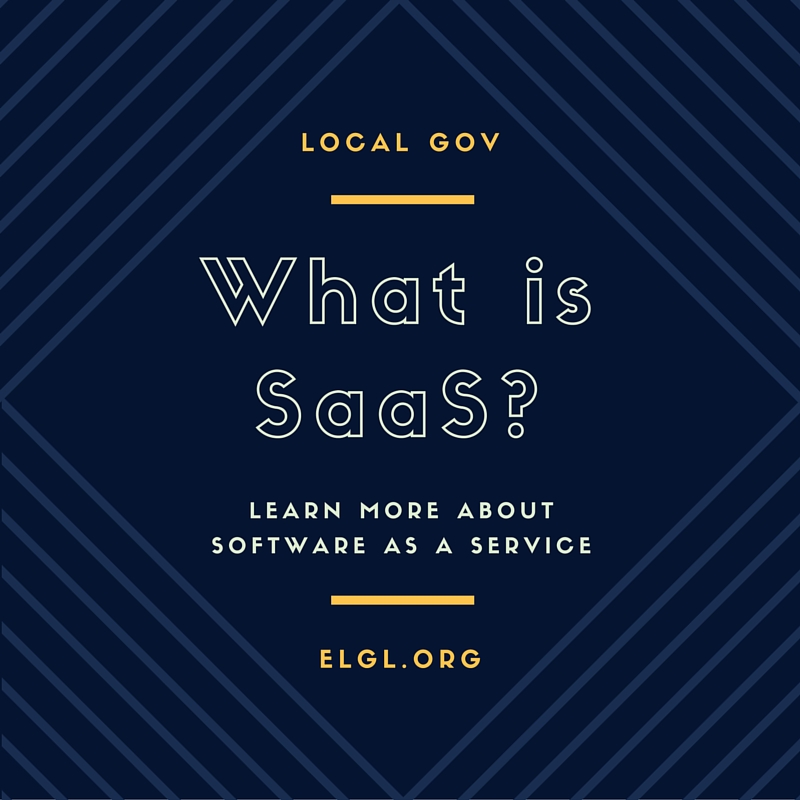 Have you been hearing the term “software-as-a-service” everywhere? Wondering what the “SaaS” acronym means? Fear not – ELGL member Luke Fretwell is here to explain this concept to you, and why it matters for your local government now (and into the future).

Luke also shares a cool pilot program where your local government can receive a free new website in exchange for working with ProudCity.

The operating systems that run our phones are frequently issued updates to provide better functionality or security protections. Other services, such as Google Apps, NetFlix, Amazon and every social media platform, also follow true SaaS development models: release updates often to everyone.

As consumers, we appreciate this frequency. It makes us safer and the user experience is more enjoyable. By paying a nominal monthly fee, we constantly experience a better product, and numerous consumer surveys show satisfaction rates for these services is consistently high.

Imagine if today you were forced to use Google, the iPhone or Facebook from five years ago, with less privacy, security and general user experience elegance. Unfortunately, most residents, businesses and tourists visiting a city website experience a five year-old iPhone.

Currently, the model for government technology solutions is a stand-alone offering: A technology vendor — sometimes advertising itself as SaaS — will set up a single instance of its product and only update it if you renew or upgrade your license.

The other model is a services-based approach, where cities pay someone to manage custom software updates. Typically, this model works when cities are fortunate to have one or both of the following:

Given the budget constraints of most cities, coupled with challenges in recruiting technology talent, these two options are still relatively unattainable or unsustainable for local governments.

Most cities today purchase web services through an outdated process, developing a highly-detailed request for proposal that calls for overly-customized and unnecessary requirements. The timeline from beginning to end could be 12 months, with the delivered end product being outdated immediately on the day it launches.

Meanwhile, the SaaS alternative has been improved exponentially over that same period, and never truly expires (For example, ProudCity follows a two-week release cycle, and all users immediately realize the benefits without incurring additional charges.)

With SaaS, the business model is scaling one product and constantly making it better, taking an economies of scale approach to resources.

Email SaaS provider MailChimp has a great explanation on why it is more important for them to focus on scale:

It allows us to keep our overall pricing down while maintaining a feature-rich application and continuing to provide great support. We want MailChimp to be accessible and affordable for all of our customers.

And, with respect to the impact of software, Netscape founder Marc Andreessen famously quipped, “software is eating the world”:

More and more major businesses and industries are being run on software and delivered as online services—from movies to agriculture to national defense. Many of the winners are Silicon Valley-style entrepreneurial technology companies that are invading and overturning established industry structures. Over the next 10 years, I expect many more industries to be disrupted by software, with new world-beating Silicon Valley companies doing the disruption in more cases than not.

Andreessen said this in 2011, so we’re halfway there. Even his venture capital firm, Andreessen Horowitz, is beginning to invest in the government technology industry. Other firms such as GovTech Fund are fully focused in this area, so the market is ripening for technology disruption that will only benefit government leaders.

As more and more of us begin to rely on the web to interact with government, the relationship between great online experience and government satisfaction is increasingly interconnected. According to the Accenture report, when citizens were asked “Which of the following would change positively if government improved digital services?,” they responded:

As part of our first ProudCity Pilot Program, we worked with the city of West Carrollton, Ohio, to prove the SaaS model works incredibly well and defies traditional thinking on how government web services can be managed. West Carrollton’s previous website was eight years old, and they moved the entire site, and a number of functions offered by legacy vendors, to the ProudCity platform in 60 days.

“To be honest, when we started the project, I didn’t think that would be possible,” West Carrollton Public Relations Coordinator Erika Mattingly told Government Computer News.

Not only was West Carrollton able to move quickly with SaaS, they’ve also quickly started to migrate services from legacy vendors to ProudCity — services we didn’t offer four weeks ago. Because of this, they have already started to re-evaluate and streamline internal processes using these new tools.

Note: For those interested in applying to the second round of the ProudCity Pilot Program, the application deadline is Friday, April 8, 2016, and we’ll announce new pilots on Tuesday, April 12.

Fortunately, cities are beginning to realize the benefits of true SaaS with companies like ProudCity, SeeClickFix, NextRequest, Romulus, OpenGov and a growing wave of other modern, civic-focused technology providers who are helping reset government expectations when it comes to digital solutions.

As more and more government leaders start thinking with a software mindset, making their digital operations easier to use and ever-evolving, they will scale public service and offer amazing civic experiences to those they serve at costs significantly lower than before.

Those that don’t will continue to serve with a five year-old iPhone.

Given the ubiquity of both government and software-as-a-service in our lives, it’s only natural they are starting to work more closely with one another.

Luke Fretwell is co-founder and CEO of ProudCity. He can be reached at [email protected]. Learn more about the second round of the ProudCity Pilot Program.