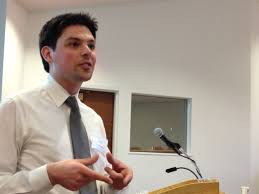 In this series, guest columnists respond to one of three topics selected by ELGL co-founder Kent Wyatt. This week, Greg Stopka, Strategy and Innovation Manager, Park District of Oak Park, writes about the opportunities and challenges of the “innovation” title.

What’s your definition of innovation?  It’s a loaded term and I remember when I worked for the Alliance for Innovation that we struggled to answer this question. Is it about changing my local government or all of local government? Is it about the next big thing for us or the next big thing for everyone? Now that I am working in an innovation position, I define it as problem-solving and engagement. The more you can identify community problems and connect people inside your organization, outside your organization, and everywhere in between, the more likely you are to identify “innovative” solutions. During my first two years at the Park District, I haven’t felt the pressure of high expectations because I know innovation derives from the organization/community, not myself. My role is to frame innovation in a way that is about making life better for the residents of Oak Park by solving problems.

One of my favorite quotes is from James Carville (the “Ragin Cajon”), a campaign strategist of the Clinton 1992 presidential campaign.  In order to keep the campaign on message, Carville hung a sign in the Little Rock campaign office reading, “The economy, stupid.” It was a reminder for staff to focus their message on the recession.

At the Park District, this quote has stuck in my mind. We have a program called the Parks Report Card where we use a mobile evaluation tool twice a year to inspect and measure the parks’ conditions in order to have the highest quality. We also post the data on our dashboard system so anyone can view the ratings, including the Board and residents.  The data drives decision-making for capital investment, maintenance improvement, and prioritization. One of the challenges the program faced when I arrived was the lack of buy-in and use of the data by internal staff. After speaking to them, I learned that they view the tool as a ‘gotcha’ device. While accountability is a benefit of the tool, I heard Carville’s voice in my head: “it’s about problem solving, stupid.”

Before the parks opened for the 2018 season, I met with the Parks and Planning Team and reviewed the scores and pictures from 2017.  I explained I wanted their team to look at us as one team working together to make great parks. I looked at my role as a teacher, not a judge.  I wanted the staff to be successful; I did not want to punish them. After completing the first survey in early summer, I uploaded all of the pictures I took so the Team could see the problem areas to correct before the next survey in August. At the end of the season, I built a comprehensive report for them that was customized into specialized areas, including fields, landscaping, facilities, and parks.  I eventually rebuilt the dashboards to pull out data that was specific to these areas. What this meant is the Facility Manager could easily identify pictures and scores for his area and the same for the Field Manager and Parks Operation Manager. They could then plan for the following season to address outstanding issues. In the end, the scores were higher, staff bought-in, and we had a more successful system.

Innovation, performance management, and strategic planning can easily turn into a headache for staff if they view it as punitive or busy work.  It’s my job to use these tools to help them, and to not hinder them. It’s important that everything we do is seen as a problem solving tool that makes life better for everyone including internal staff.  If you frame innovation in these terms, staff will be more open to it and the pressure of expectation dissipates.

It’s not about your solutions

I also constantly remind myself that the solutions are not mine. In 2015, The Park District of Oak Park started Launch Pad, a virtual platform to share and collaborate around new ideas in real-time.  Every month, the Innovation Team, a cross-functional committee, met to decide how to best allocate a portion of non-resident program fees. The program was initially very successful. We implemented a cistern, solar cell-phone chargers, among other ideas. We even won the Alliance for Innovation’s prestigious J. Robert Havlick Award for Innovation in Local Government. The only problem with this award-winning program?  It wasn’t working. We were seeing a decline in number of posts, there was little follow-through on ideas implemented, there was bias within the Innovation Team, and there was a lack of clear ROI from what was funded.

Now while I had my own ideas on how to fix Launch Pad, I knew that a more sustainable solution would come from within.  Instead of dictating the answer, I led a conversation with the Innovation Team to identify the problem-areas. The group recognized the same problems I saw and proposed new engagement strategies to address them.  They then prioritized what solutions they felt would have the biggest impact and then we implemented those. Because the Team owned the solutions, I didn’t feel any pressure because the answers were the Team’s, not my own. What this example shows is that if you come into the position with the mentality of “I’m going to innovate this place,” then yes, there will be pressure.  However, if you instead engage the existing stakeholders to identify the solution, you’ll have more sustainable solutions.

So do I feel added pressure because there are high expectations for innovation?  No. By adopting a mentality of problem-solving and engagement, I make innovation about the organization and community not myself.  For us innovation can be as simple as a staff member suggesting using excess pine cones in a pre-school program or stocking reusable bags in our vehicles. But what about the big innovations?  While it’s still about problem-solving and engagement, where the big innovation comes from is when you can engage with other innovators around common problems through peer groups and share emerging ideas that can be adapted and adopted.   In that way, there is no greater driver of innovation than ELGL and the Alliance for Innovation.